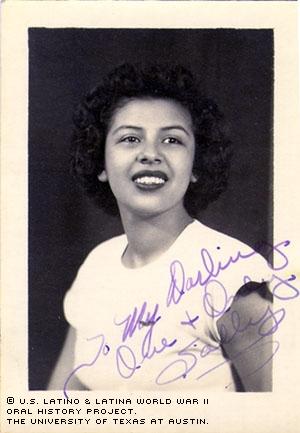 Sallie Castro is the wife, mother, and grandmother of military men. The walls in her living room are covered with pictures of the men in uniform and medals decorate the bookcases. Mrs. Castro, 74, is a true patriot.

Zoila Antonia Castillo, "Sallie," was born in San Marcos in 1927. Her father died of a heart attack a month after her birth, leaving her mother Victoria Castillo, to raise her and her four sisters alone. The mother provided nursing help to women who had just recently given birth. They lived in the country near San Marcos, Texas, about 30 miles from Austin, until they moved to Austin when Sallie was 8 years old. Later, Victoria Castillo remarried.

In Austin, Sallie attended Zavala Elementary, an almost all-Hispanic school. Sallie's mother made sure that she and her sisters learned English at a young age. In school, Sallie translated for the teachers and kids.

"There was bigotry from parents and children," Castro said. "That's the way they were raised. And it takes a long time to educate you one way or the other. We were just as bad though."

The Hispanic students at Austin High were not allowed into organizations, like drama club or varsity sports. They could only join the Hispanic Club, an organization that helped educate students about their culture.

"We couldn't do anything, no matter how talented you were," Castro said. "There was a separation there."

Castro also remembers not being able to eat in certain restaurants. One day in particular, Castro and a friend walked into a Woolworth's to eat hamburgers at the counter. They sat down after getting their food but were promptly told that they had to eat standing up by the door. A friend of Castro told her years later that she didn't remember going through that kind of segregation.

"You were standing by my side eating a hotdog and drinking a coke," Castro told her friend. "So if that's the way you want to remember it...I don't hate anyone but I do remember what happened. And I won't put it aside or lie about."

When the United States entered WWII, Sallie Castro was in high school. The war didn't affect her family as it did others, since there were five girls and no sons to be drafted. Her family didn't feel the hardships that other families felt.

"I had several cousins that were in the service," Castro said. "But we didn't have any boys so we I guess we lucked out in that way."

She did not go through the war unaffected however. She and some friends got together often to write letters to the servicemen. They called their club "Blue Horizon." They would exchange names of friends and family that they knew of overseas.

Castro also remembers rationing. The U.S. government limited people in buying such things as sugar, meat, and materials used in combat. Families were given ration stamp books that were used to purchase rationed goods.

"When [the stamp books] were gone you couldn't purchase any more, even if you had the money," Castro said. "We managed. Mother was very good at managing with what she had. She had learned when we lived in the country."

Near the end of the war Castro moved to Ohio to live with uncle and aunt. On the night of D-Day, her uncle took her downtown to celebrate the end of the war in Europe. People were all over the streets, crying and singing. Merchants were handing out food and donuts. Men from the nearby naval base were coming through cheering.

"It was a riot," Castro said. "People were hugging and kissing. It scared me half to death; I was still pretty much a country girl."

Soon after the war ended, Sallie moved back to Austin. Some friends came home; others did not.

"There was a lot of sadness then because there were a lot of people we all knew who were killed," Castro said. "A lot of them were in prison camps and they came back not themselves."

Castro's experiences during the war made her feel more vulnerable than before.

"It was safe here," Castro said. "After War World II, I didn't feel as safe. I guess Pearl Harbor did it. If they could attack Pearl Harbor, they could certainly attack New York or any other place."After the war, Castro became involved in the League of United Latin American Citizens, LULAC. It was through LULAC that she started dating Ladislao Castro, a veteran in the war. They were married on Aug. 21, 1948.

Ladislao Castro also served in the Korean War and their son Jimmy fought in Vietnam. Their grandson fought in the Gulf War.

Sallie Castro feels that life for Hispanics has improved greatly in her lifetime. She thinks that things began to change after the war, in the 50s.

"I guess the war did it because of all the connection that the boys had," Castro said. "I mean if you needed to jump in a foxhole, I imagine you didn't question who was in it, or what color they were. They basically learned to deal with it. And then through them, we did."

Castro is glad that her sons did not have to go through the prejudice and segregation that she experienced in her life.

"I had a lot of resentment and I'm glad to see that my children don't," Castro said. "They say, 'Well mom, that's the way it is. They were raised that way and we were raised this way.'"

Although she sees a great improvement, Castro does feel that we have a long way to go before life will truly be equal for Anglos and Hispanics. Yet despite any frustration, Castro believes whole-heartedly her country.

"I would give my all for my country, because it's not the country that's the fortune, it's the people in it," Castro said. "Believe me, this is the best country in the whole world. I wouldn't want my children to grow up anywhere else."