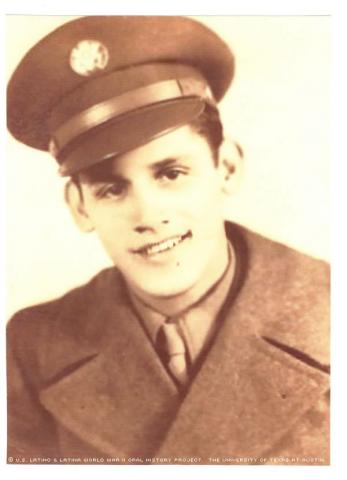 Willie Murillo was the third of five brothers who served in World War II.

Before the brothers left for service, their father took them aside and said, “I hope you never find yourselves on the front line; but if you do, always remember one thing: The enemy fires the shots, God is the one who separates them.

Murillo was with the First Ranger Battalion. On a cold, damp Jan. 30, 1944, the Germans captured the commandos of his battalion in Anzio, Italy. Murillo and the other American prisoners were taken to “Hitler’s Heartbreak Hotel” in Hammerstein, Germany, as Murillo was known to put it, where they stayed 18 months, in stalag 2B.

“To begin with, they were all interrogated,” wrote Murillo’s daughter, Tina Bell, in a 2003 tribute to her father. “The soldier ahead of my father got mouthy with the German officer. He was shot and killed. Dad was next. He wouldn’t speak to them in English. The German officer asked my father his name.

‘Get out of here. You have no business being in this war,’” Tina recounted her father being told.

“Dad remembered another episode of his incarceration. A German soldier went into their barracks and told them they were going to get to take a bath. The American soldiers were ecstatic. They hadn’t had a bath in over a month,” Tina also wrote.

“They were told to strip and get in line outside a particular building. The door was opened; the American prisoners filed into a stark, tiled room. The door was closed behind them. The men waited. No water was forthcoming. At this point, there was a commotion on the other side of the door. Dad said they heard the Germans arguing. Finally, the door swung open; and they were ordered to get out and return to their barracks. …

“It wasn’t until years later, after watching the movie ‘The Holocaust,’ that [D]ad recalled this incident and realized that the Germans were probably going to gas them.”

Murillo and the other North American prisoners were used as free labor on a local farm until the Russian Army liberated them in July of 1945. And on Nov. 8, 1945, Uncle Sam honorably discharged Private Murillo from the Army.

After the war, he returned to his job as a tailor, working with his father, David Murillo, in San Antonio, Texas.

“All the years growing up, I knew my father had suffered through the horrible ordeal of being a prisoner of war. As children, we were never privy to any details, except from what we gleaned ourselves. Dad would get drunk, and his yelling would wake us in the middle of the night. I knew he was reliving his days of being a prisoner, because he would be talking in German, Spanish, and English,” Tina wrote. …

“Until I was an adult, I never really understood the extent of the physical and psychological trauma that he endured. Dad didn’t talk to my sister or me about his being a POW until we were grown, married, and had children of our own.”