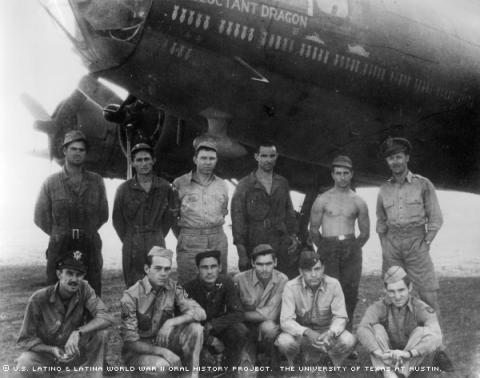 Vicente Ximenes still recalls his days as a Mexican American boy growing up in the 1930s in Floresville, Texas, a town where segregation formed part of his everyday life.

Ximenes also remembers that out of the 100 Mexican American kids who started elementary school with him, only five, including him, made it through high school.

"It was tough growing up," he said. "Coming from an elementary school that was segregated into a non-segregated school ... you experienced discrimination."

The last incident Ximenes and his fellow Mexican American high school friends had to encounter was their graduation banquet, where they were ignored because of their race.

"We all gathered over, and at the corner there were five seats for those five Mexican Americans that had graduated," said Ximenes, laughing.

After that, Ximenes and his friends didn't attend their graduation ceremony and decided to get their diplomas by mail.

"We had to give a message to our teachers, that things had to change, that we were hurt, but we had graduated," he said.

Ximenes was determined to make it, and even though he said he was aware of what was going on in the system, he added that he never gave up.

"There was a certain attitude that said, 'I'll take this but I'm gonna get through and I'm gonna beat you,' that was the attitude I had," Ximenes said.

In 1939, after graduating from high school, Ximenes had no chance of finding a job, but his father, Jose Ximenes, who was a Democratic leader in Floresville, knew Lyndon B. Johnson and arranged for his son to join the Civilian Conservation Corps. He started out as a field worker, clearing mesquite trees, before becoming a chief clerk. In the camps, he also made sure there were enough food supplies, and he wrote letters for those who didn't know how to write so they could communicate with their families.

He says this job was the part of his life that taught him about human relations.

"I learned a whole lot about the need for cooperating with each other," he said.

After a year in the CCC camps, Ximenes had saved enough money for his first semester at the University of Texas at Austin. There, he became friends with Dr. Hector Garcia, who would later organize the American GI Forum.

Ximenes lived in a cooperative and worked serving lunches to other students. He also worked another part-time job to get through his first year of college.

Then in 1940, with three semesters of college, Ximenes was able to get a job as a principal at a two-room elementary school in Picosa, Texas. But, Ximenes said, the school merged with a larger Floresville school after only one year.

When World War II broke out in December of 1941, Ximenes volunteered and was appointed a U.S. Air Force cadet in San Antonio, Texas. A week after Pearl Harbor was attacked, he was on his way to Kirtland Field in New Mexico, where he became a 2nd lieutenant at the bombardier school.

"I had no idea about bombs and planes," he said. "We were thrown in a situation where you had to learn, and you had to learn quickly because the Air Force needed people as soon as possible"

After a few months of training with a B-17 crew, they finally took off from West Palm Beach on Christmas Eve of 1942, and Ximenes was on his way to the Mediterranean to "throw out the Germans in North Africa."

"I had no idea where [North] Africa was or who occupied it," said Ximenes, a smile on his face. "That was an awakening for me. I had no idea of what was going on."

Finally in 1943, after flying 50 missions as a lead bombardier in North Africa, and after having received the Distinguished Flying Cross for bravery under fire, Ximenes returned to the States. He remained in the Air Force as a cadet flying instructor at San Angelo Air Base in Texas, and four years later, retired as a Major in the Air Force.

But after coming back home, Ximenes saw that discrimination continued to be part of Mexican Americans' everyday life. He said he clearly remembers how Mexican Americans in Floresville couldn’t go to the same barbershops Anglos went to, and how Latinos had to sit in the movie theater’s balcony during Saturday afternoon shows.

But as much as Ximenes wanted to change things, he knew that without education, things couldn't be done. After retiring from the Air Force, he looked forward to enrolling at the University of New Mexico, a school he remembered seeing when he was training in New Mexico. In 1947, he moved with his family to Albuquerque to study economics.

While in school, he never thought a simple vacation trip to Corpus Christi, Texas, would make him get involved with the American GI Forum to fight for civil rights. In Corpus his friend, Dr. Hector Garcia, invited him to attend a meeting. He thought it would be a medical gathering, but it turned out to be a meeting of Mexican Americans trying to form an organization that would fight for human and civil rights.

"Our idea was for our people to have a place where they could come and complain about discrimination," Ximenes said.

In 1950, he received his Bachelor's degree in economics, and his Master's degree a year later. After graduation, he began working as a research economist at the University of New Mexico. After 10 years at the Bureau of Business Research, he realized Mexican Americans didn't own businesses, they didn't have power and they were among the poorest groups in the nation. To him, a lot of these problems had to do with discrimination.

But it was also the memories of his father that helped Ximenes continue with his political causes. He remembers that even though his father had lost their general store, he still had the energy to continue and to help others.

"I tagged along with my father when he became involved in politics," he said. "We needed representation, and one of the ways is to become politically involved."

A year later, he was appointed by President Johnson as U.S. commissioner of the Equal Employment Opportunity Commission in Washington, D. C., where he served for five years. The first Mexican American to be named to the position, he attributes this and other accomplishments to those who encouraged him.

"I give credit to my friend Dr. Garcia, who was the first one to work for the civil rights [of Mexican Americans]," Ximenes said. "I had a good job as an economist, but he insisted that they take me from Panama so they could name me commissioner."

President Johnson also chose Ximenes as the chairman of his new cabinet committee on Mexican American Affairs. He later became the vice-president for field operations of the National Urban Coalition.

Ximenes is aware of all his accomplishments and the good he did, not only for Mexican Americans but also for people in general.

"The things I have done are very significant in terms of integrating everybody," he said.

His education is what got him to the White House, Ximenes said. However, he mainly attributed his success to his parents, who were always there for him and his brothers and sisters, who also received good educations.

"They could've easily broken down with the pressure that was placed upon them," said Ximenes of his parents. "But they didn't break, and they held on to their beliefs."

Ximenes is glad he volunteered for military service because he not only served his country, but also learned about the world outside his home.

"During the war, I discovered that we, Mexican Americans, have the same abilities as the Anglos," he said.

Ximenes and his wife, Maria, had four children: Their oldest son, Steve, who graduated from the University of New Mexico and died during the Vietnam War; Ricardo, an artist; daughter Olivia, New Mexico's deputy state land commissioner, Ray Powell; and youngest daughter Ana Maria, a lawyer.

Mr. Ximenes was interviewed in Albuquerque, New Mexico, on October 10, 2001, by Jim Morrison.