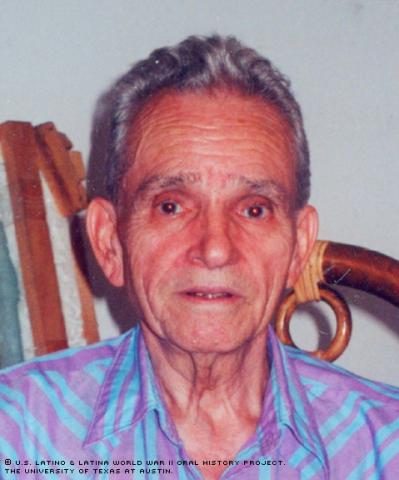 Santos Deliz and a few other men from his unit crept into the abandoned house in Germany, seeking refuge and respite from battle. After a quiet night, Deliz awoke with a shock.

"It was too dark; we couldn't see...when I woke up there were five dead Germans around me." uttered Deliz with a resonating Brooklyn accent. "The explosion of a shell must have killed them."

World War II was another odyssey in the street-smart Puerto Rican kid's tough-luck life. He would suffer the first major blow at the tender age of 8, when his mother, Julia Cardona Deliz, died. Social Services promptly shooed away Henry, Santos, Edward, and Norma Deliz to a Catholic orphanage on Staten Island. Julia Deliz's widower, Santos Sr., who had a law degree from Cornell University, spent two years battling the courts for custody.

"I remember the daycare we used to go near Central Park...I waited for [my mother] for eight hours by the window," Deliz remembered during an interview in his home in San Juan, Puerto Rico.

Although his father won the lengthy trial, the Deliz children were once again shipped off to another orphanage, this time in upstate New York. Ten-year-old Santos rebelled this time, and made a run for it. The young escapee's freedom was short lived, however, as railroad workers picked him up and returned him to the orphanage. He was greeted at the door with a scrub brush and a lengthy list of chores. Two years later, Santos' father helped him escape.

Santos Deliz Sr. wanted his children back, but without court interference. Dad paid the orphanage a visit and slipped his son passed the gates and into the car. His younger brother and sister soon followed. Finally, the family was home, living in Brooklyn, four years after their mother's death.

Time may have reunited the remaining members of the Deliz family but the times were financially tough. The Depression of the 1930s spared no one so everyone, even 13-year-old Santos had to help out.

Deliz was never one to sit still. Since members of the Civilian Conservation Corps had to be 17, Deliz used his deceased older brother's name and birthday to join. His brother had died in childhood.

The stint at Camp G-93, in Keating, Oregon, near Eugene was short-lived, however, and after six months and an arrest for disorderly conduct, he returned home. The charge stemmed from a prank; a group of boys had hitched a ride to watch a movie in Eugene; on the return trip, failing to get anyone to pick them up, one of the group laid down in the middle of the road. A motorist who stopped promptly reported the boys' actions to police and Deliz and his friends spent the night in jail. After his 6-month stint, Deliz was ready to return to New York.

The old neighborhood in Brooklyn was a hotbed of racial stress as the demographics changed. Puerto Rican businesses were supplanting Jewish businesses; young Puerto Riqueños were dating Italian girls. Deliz was in the thick of this broiling stew, holding down odd jobs - binding books for a Catholic publishing company during the day and working at a club at night. But soon the job landscape would change.

"We were thinking about [the possibility of war]...we knew we were going to go," Deliz said.

Pearl Harbor was bombed. Factories making shell casings and other weapon pieces sprang up over night. Coffee, sugar and gasoline were rationed. Deliz worked as a milling machinist and contemplated enlisting in the Navy.

After a year as a machinist, he was drafted into the Army in January 1943 and went to Camp Edwards in Massachusetts for basic training.

Deliz, assigned to Battery D, 216 AAA, a gun battalion, was sent to Africa in 1943 to join General George S. Patton's Third Army. Patton demanded the best from all under him, including cooks and kitchen hands.

"[Patton] went in to inspect [and] he scolded me because I had rations over the amount I should've had. The rations were food the GIs didn't want, so instead of dumping it, I sometimes gave it to the people who were around there," Deliz said.

"He could've court-martialed me," he said.

A parade in his honor was not waiting for him at home, however.

Santos Deliz Sr. had moved to Florida and his younger brother, Edward, was still serving in the Navy Another brother, Henry, was also in the Navy. Only his sister, Norma, was in New York to greet him. The girlfriend whom he had hoped to marry had gotten hitched with a grocer and moved to California.

Life was tough for the next several months. He lived with friends off and on and even spent a few nights in his car. The fast times of nightclubs and Coney Island were years gone. Earning money was a priority and the only way to go about it was to go to school. Deliz had not finished high school, so opted for vocational school - Manhattan Jewelry School. For the next four years, he sharpened his skills as a jeweler and watch repairman.

He spent his free time at the Gardenia Social Club, helping organize day trips and dances for the Puerto Rican community. In 1948 he lived with a high school girlfriend, Edith Rivera. A son, Harry, was born to the couple in 1956, but the couple never married. Deliz had divorced his first wife, Gloria Arroyo, in 1945, after about two years of marriage. The couple had no children.

Business was good for Deliz. He had high-profile clients in New York and Puerto Rico.

The next several years were a flurry of activity. Business took him back and forth from New York to San Juan.

In 1950, Deliz married his second wife, Ana Torres. The couple divorced in 1963; they had no children.

He met his third wife, Nivia Reyes, on a blind date in 1963 and tied the knot in 1964. Their daughter, Monique Michele, was born two years later.

The family moved to San Juan, Puerto Rico in 1976. Mrs. Deliz was from Naguabo, Puerto Rico, and Deliz had many business connections there. The couple still makes their home in San Juan. Monique went to New York to attend the Fashion Institute but has since married and returned to the island and raised four children.

Deliz said that there were positive lessons to be learned from the war.

"The war taught you how to work," he said.