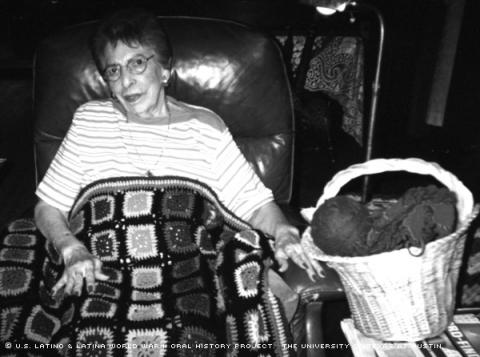 It was 1944 and 28-year-old Santos (Sandy) Acosta had lost all hopes of meeting the man she would marry and live with for the rest of her life.

But that same year, the fantasy became a reality. Sandy Acosta met a sailor, who was young, charming, and who wanted to marry her, which took her by surprise.

"I never did think that he would ever do that," she said.

Fuentes' husband was shipped out soon after their nuptials, and her dream turned into a nightmare as her love went overseas to fight in WWII.

Fuentes is just one of the "war brides" whose husbands served in the war. Toby Fuentes, her groom, would join hundreds of thousands of men who left their families behind to take up arms. For many women like Fuentes, it was a painful personal sacrifice.

It's been 56 years since the day of their wedding. Marriage brought the Fuentes' four children, most of whom followed the path Fuentes discovered while her husband was away at war: working as hair stylists.

Fuentes was interviewed in October 2000 in her East Austin home. Her short, auburn hair was perfectly coiffed. Her neatly manicured fingernails were polished red. At 84, Fuentes still remembers the day she met her husband-to-be at a nightclub. She was there with a close friend, Lorraine Camacho, who happened to be a cousin of Toby Fuentes,' a sailor visiting from Houston.

Fuentes said that the day he proposed she realized they were meant to be together, forever, because she could feel their relationship could be serious and strong.

"I want to have a church wedding," Fuentes told her intended.

It was a test, she said, that would show how serious he was about committing to her.

He told her, without hesitating: "We'll go to church tomorrow and we'll do everything that we need to."

"And he did," Fuentes recalled. "He bought my wedding dress, and he bought my rings. And then in three days we got married."

Love at first sight or not, they knew that there was a war waiting. Even though the war would separate them, they knew the challenge was worth it because it would prove the feelings they had for each other.

It was at that moment that her life took a different turn. They headed to Vallejo, Calif., 60 miles west of Sacramento, to stay until he left - not knowing when he would return.

Fuentes didn't quite call to mind how long they stayed in Vallejo. She remembered that not much time had passed when she received the painful news that he would leave soon.

"He came in one time and said: 'They said if we have girlfriends, or wives, or anybody, the train is ready to leave and send them home,'" Fuentes remembered sadly.

She left Vallejo without knowing if she would ever see her husband again.

"From there I came home by myself, that's when I started working at a laundry after that - folding clothes," Fuentes said.

Fuentes said that time passed so slowly. She would think about him, about when he was going to come back, and about whether or not he was still alive.

During the time Fuentes' husband was gone overseas, they would communicate by mail to say how much they loved each other, even if the letters were not private at all.

Fuentes says the government would censor all the letters to make sure that the enemy would not know by any way possible what their future was tactics would be. Private or not, Fuentes says they had their own codes by which her husband would tell her in what part of the world he was.

One example of the code: her husband would tell her he had 'bought you some dishes,' if he was in Japan," Fuentes remembered.

Even in the absence of privacy, Fuentes' husband would not miss an opportunity to be romantic and to tell her how much he missed her.

"He told me one time: 'If you see that bright star up in the sky, when I get home I want to put it in your hair,'" Fuentes said.

Even though she said she would pretend all was well, she would still worry about her husband.

"I always did," Fuentes said.

Fuentes' husband was away for a year and a half, and during that time, Fuentes succeeded in her profession. Her passion for styling hair peaked when she became the owner of two beauty shops in Austin, Texas.

In 1945, the letters stopped coming. The war was already declared over, but Fuentes did not know if her husband was still alive. One day, while having coffee at Carusso's with a friend, she saw the figure of the man she had married.

"I couldn't believe that he was home," Fuentes said.

She said the moment she saw him she looked out the restaurant to yell out his name to make sure that it was her husband.

From that day, they dedicated their lives to recover all the time they were apart during the war.

"We traveled a lot. He used to drive," Fuentes said, "We went to Mexico City and Tampico."

She remembered when she fell in love with that sailor, and even after so many years, the love remained.

"I still am," Fuentes answered, when asked if she was in love her husband during the time she went through war without him.

For more than five decades, Fuentes said, love has been the primary factor that has kept she and her husband together.