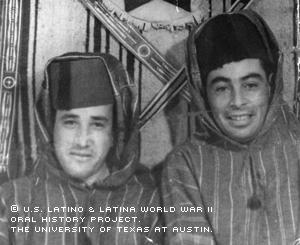 As U.S. Army medic Santiago Craver drove his ambulance up to the pick-up site in Northern Africa, one of the wounded men glanced up at him from below.

He had a familiar face.

"It was one of my friends who used to work with me at William Beaumont Hospital," Craver said. "It was Leo. His fingers had been cut off."

When someone else got in the driver's seat, Craver went back to care for the wounds of the old friend. As a member of the Medical Corps in Northern Africa during World War II, it was a familiar scene for him.

But service in the Army isn't where Craver began his work as a caregiver. Born the second of four children to Ana Brito Craver, a hotel worker and housewife, and John Craver, a bridge-builder, Craver was only 5 years old when his father abandoned the family in 1925, never to return.

After that, Ana was on her own, working all the time trying to make enough money to support her children, Craver says. She died in 1937, at the age of 54, from "overwork," he said. The four Craver children went to live with her grandparents.

Despite losing his parents, Craver remembers his childhood in El Paso fondly.

"We used to go swimming in the Franklin Canal, and I played a little basketball with the rest of the kids in my neighborhood," he said.

The family grew up speaking Spanish, as both of Craver's grandparents were from Mexico. Craver began learning English in the second grade at San Jacinto Elementary.

"I used to like [school]," he said. "Teachers took their time to teach us Latino kids English. They were very patient with us."

He attended Bowie High School for more than two years, before having to quit and work to help support his younger siblings.

In 1937, he joined the Civilian Conservation Corps, a public works program that put more than 3 million young men and adults to work during the Great Depression.

Craver worked with the program for about a year in New Mexico; first at Lincoln National Forest and later at Gila National Forest, fighting forest fires and caring for damaged trees.

When he came back to El Paso in 1938, he worked unloading cars for a lumber company. He then went to California for six months to labor on the Southern Pacific Railroad, but soon returned to El Paso to work as an orderly at William Beaumont Army Hospital. He was employed there for one year.

But soon, everything would change.

One Dec. 7, 1941, Craver walked out of a movie theater to learn Japan had attacked Pearl Harbor.

"I walked out and all the newspaper [boys] were shouting, 'Extra! Extra!'" he recalled.

Craver was drafted a few months later and at age 22, inducted into the Army at Fort Bliss in El Paso. He received six months of basic training at Camp Barkeley, slightly southwest of Abilene, before being sent to Camp Gruber in Oklahoma for six more months of training as a medic.

"There, I learned how to care for the sick or wounded and give shots to patients," Craver said.

After moving to Camp Kilmer in New Jersey to await orders, he finally boarded the USS Dorthea L. Dix, for a nine-day trip through the Strait of Gibraltar to Oran, Algeria.

"I was seasick most of the time," he said. "I had a 104 temperature and we were crammed in there like a bunch of sardines. To vomit, you had to run or use your helmet. The restrooms were always full."

While overseas, Craver was stationed at hospitals in Algeria, Tunisia and Casablanca, Morocco, driving ambulances and caring for wounded and sick soldiers.

Thanks to the proactive nature of the Army Medical Corps, as well as major advances such as the use of penicillin, a soldier in WWII had a far greater chance of survival than in previous conflicts. According to the American Military Medical Impression, 50 percent or more of the men admitted to hospitals during the Civil War died; during World War I, 8 percent died; and by WWII, the death rate had dropped to 4 percent.

In his 33 months in North Africa, Craver learned some French and Italian. Most of the area was under French rule, and he says he was usually treated well by the locals.

When the war ended, he traveled home on the USS Cristobal to Virginia, where he took a train to Fort Sam Houston for his discharge on Dec. 9, 1945. He’d earned an EAME Campaign Medal, as well as a Victory Ribbon, service stripe and five Overseas Service Bars.

"I seemed to enjoy [my time in the military]," he said. "I saw different kinds of people -- different cultures, different everything."

Still, Craver says it felt good to be home.

"I was out of the Army," he said. "I didn't have to wake up at 5 in the morning and I could go out at night and have a beer without having a pass."

Craver came home to El Paso. In 1948, he married Francisca Saenz, a shipping clerk at Fort Bliss. The couple had three daughters: Elvia, Irma and Lora.

Craver got a job as a truck driver and spent time driving in New Mexico, but when he wasn't behind the wheel, he was taking care of his family.

"It got lonesome at night on the road," he said, despite the fact that his daughters tried to help by leaving notes in his bags, reminding him to sing along the way to stay awake.

Craver says he worked so hard to be able to support his daughters and their education, a privilege he was never given. Be sure to get an education is the most important advice he says he has for young Latinos today.

"My kids had my support," Craver said. "They had their mother's. We wanted them to have as much education as we could give them."