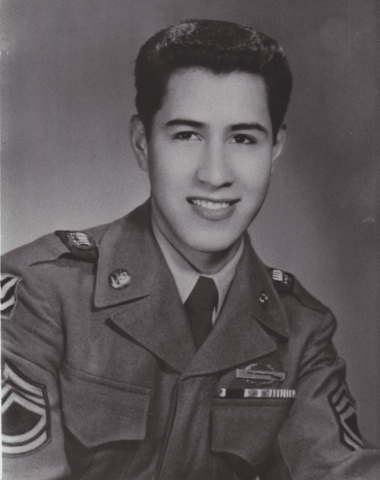 An elementary school teacher told Samuel Echeveste he would one day be defending his country.

The young boy sitting in that classroom in Miami, Arizona (about 70 miles east of Phoenix), would fulfill that prophecy, finishing basic training and being sent to the Korean War before his 20th birthday.

Echeveste never saw himself becoming a decorated war veteran serving the U.S. during a time when he was not accepted by his fellow Americans.

His journey began in segregated Miami, Arizona, where he was born on Christmas Eve 1932 to Aristeo Echeveste, a miner born in Leon, Mexico, and Ramona Padilla, from Morenci, Arizona.

Echeveste was one of the youngest among four sisters and three brothers, and the household always felt like army ranking. The elder siblings were in charge to keeping the younger ones in check.

“We were just good kids. We all liked school,” Echeveste said of his childhood.

His mother pushed education. Her dream was that her children have jobs that required them to wear suits and ties and to carry briefcases, he recalled.

The family saw education as a way to combat the harsh segregation Mexican Americans suffered in Arizona.

“We all suffered together and we did not forget the reason we all went to school. We always knew there was a way out," Echeveste said. "And the way out was education.”

Echeveste grew up in the neighborhood of Grover Canyon, situated in a deep canyon in eastern Miami, Arizona. The community hosted a large Mexican-American population.

Movie theaters in Miami relegated Mexican-Americans to the balconies rather than the floor. They were also restricted from swimming pools and YMCA facilities, so they kept cool in the nearby Bloody Tanks Wash, a stream named after a 1864 massacre of Apache warriors by settlers.

After the attack on Pearl Harbor on Dec. 7, 1941, however, life changed. Mexican Americans living in Grover Canyon began to be considered American.

“We realized it was going to be a big change for the Mexican Americans, an incredible change," he said. "We started being Americans for the first time.”

Instead of being turned down when applying for service, Mexican Americans were eagerly welcomed into the U.S. military. But Echeveste bided his time. Once he graduated from Phoenix Technical High School in June 1951, he immediately volunteered for the Army.

After basic training graduation, at 18, he was a recruit first sergeant.

Within a year, he was picked out of 200 troops in his basic training class to continue training at Army Field Forces Leaders Course.

As he recalled, most of the “boys” attending alongside of him were young college students and recent graduates. These men became his mentors and helped motivate him to further his education after he was discharged.

Upon completing his leadership course, Echeveste was assigned to Korea’s front lines.

He remembers that the battlegrounds resembled an erupted volcano: black soot everywhere and dirty troops trudging through the beaten-down landscape.

“My God, it does not look like the war movies,” he told himself when he first arrived in North Korea.

Echeveste was assigned as a forward observer to the 81 mm mortar platoon. He was quickly promoted from squad leader to sergeant first class, which gave him the title of platoon sergeant. At only 20 years old, he became one of the youngest persons to serve in this position during the Korean War and in the U.S. Army.

His most vivid memory was a night battle during which he was forward observer, alongside a reinforced infantry platoon. He and 80 troops were involved in a conflict that lasted through the night into early morning. The U.S. troops fought back the Chinese army, which riddled the U.S. front line with artillery, mortars and machine guns.

Echeveste recollects losing most of his troops and trying to find a way to communicate with other units with “artillery fire from the Chinese and from the Americans raining on us from all over.”

The next morning, Oct. 5, 1952, Echeveste and the troops prevailed as they charged up a hill onto North Korean territory.

Echeveste, wounded by artillery and mortar fire but alive, was rescued from a command bunker, his bayonet still on his rifle.

“I was the only one to walk off that hill,” Echeveste said. He estimated that about 2,000 Chinese died in that battle, as well as six U.S. and about 20 Belgian soldiers fighting with the United Nations Command.

Several times in Korea, Echeveste got close to death. But given the chance, he said, he would never change his decision to serve his country. He will never forget or regret his time in the military.

Echeveste received an honorable discharge on June 15, 1954, and was awarded a a Purple Heart, a Korean Service Medal with two Bronze Stars, a United Nations Service Medal, a Combat Infantry Badge and a National Defense Service Medal.

After three years of service, Echeveste returned home and attended Arizona State University, where he achieved his goal of obtaining a college degree. He earned a bachelor of arts and a master's in education. He began working in the U.S. and then in Europe at schools for military dependents.

While he was studying in Europe, Echeveste was dared by friends to date the “little Austrian girl” who sat in the front row.

Three years later, that little Austrian girl, Berta Schreiber, became his wife. They raised two daughters, Diana and Colleen, both of whom went on to become international corporate lawyers.

At the time of his interview, Echeveste was happily retired from a long teaching career, and he and his wife of 49 years had retired to Tempe, Arizona. His advice to future students: “God gives you good health and a healthy brain. Use it and go to school, and use it as much as you can. Learn as much as you can. Don’t expect things that are given to you.”

Mr. Echeveste was interviewed by Michelle Lojewski in Tempe, Arizona, on Aug. 6, 2010.