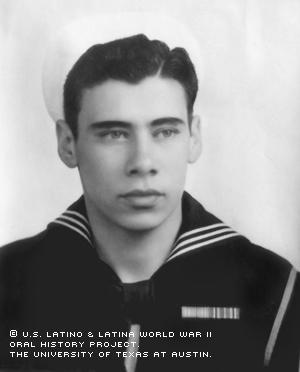 Salvador León had a choice during World War II: either take the automatic deferment provided for a family's last son not in the military, or serve his country.

"My mom said, 'This country has been good to us, so you do what you think is right,'" León said.

Immediately after the Japanese attacked Pearl Harbor on Dec. 7, 1941, his two oldest brothers, George and Edward, were drafted. George chose to enter the Navy and Edward picked the Army. Victor and Severino, the third and fourth boys in the León family, enlisted quickly thereafter. Victor became an aviation radioman in the Navy and Severino entered the Air Corps, specializing in communication.

While León’s mother didn’t choose to send her youngest son to war, León credits her faith with bringing him home.

"She never had any doubts that we would all come back," León said. "She had that much faith. Everybody came back. Nobody got even a scratch."

After only a few weeks, León’s family moved from Hanford, Calif., to Williams, Ariz., a town in northern Arizona near Flagstaff. Five years later, they moved again – this time to Peoria, Ariz., a suburb northeast of Phoenix.

León’s father died when he was only 7, leaving Seledad, who’d since borne three more children, to care for a brood of nine. During his childhood, León and his brothers worked picking cotton, strawberries or "whatever was in season."

"Just about any kind of work that came around, we did it," León said. "We had a lot of mouths to feed."

Even the boys' sources of fun -- hunting and fishing -- were more for nourishment than enjoyment. Anything they killed, they ate.

Despite the family's hardships, Soledad valued her children's education over all else.

"My mother wanted to make sure we graduated," León said. "She had hard times in Mexico and thought we could do better."

Of the nine León children, four boys and two girls graduated high school. León was a senior at Phoenix Union High School in Phoenix when the United States entered WWII.

The day after graduating, with his mother's blessing, 18-year-old León was on a train to San Diego, Calif., to enlist in the Navy.

After signing up June 15, 1943, León went straight to San Diego’s Camp Elliot for boot camp. Since the war was "really heating up," León's experiences in boot camp were short and serious.

"They wanted people overseas or on ship as soon as possible, so you really didn't have time for fun," León said. "The only thing we were interested in was what we had to learn."

Toward the end of July or early August, León was shipped out into the Pacific from Bremerton, Wash., as an apprentice seaman. While traveling across the Pacific aboard the escort aircraft carrier USS Sangamon (CVE-26), León and the rest of Task Force 58 found enjoyment in boxing.

Every Wednesday there’d be boxing matches consisting of three rounds each. The winner would receive three cartons of cigarettes, while the loser only got one.

Although boxing was a great distraction for León to "get [his] mind off things," it didn’t last long, because the USS Sangamon was thrust into battle. On Oct. 20, 1943, León was "baptized under fire" when his ship arrived in the Gilbert Islands to support the attack on Tarawa.

During his first two days there, Sangamon's planes struck enemy positions on the island. From then until December 6, they were sent out to protect escort carriers.

León participated in the Battle of Leyte Gulf, which, according to history, was a "turning point of the war in the Pacific."

The Battle of Leyte Gulf was a series of engagements fought from Oct. 23 to Oct. 26, 1944, along the waters surrounding the Japanese-occupied Philippine Islands.

In the Battle of Leyte Gulf, the Japanese Navy lost four carriers, three battleships and 10 cruisers.

The victory also gave the U.S. Navy control of the Pacific. For its participation in Leyte Gulf, along with many other battles, the USS Sangamon received a Presidential Unit Citation "for extraordinary heroism in action against enemy forces in the air, ashore and afloat."

Less than two years after the victory at Leyte Gulf, the U.S. dropped the atomic bomb on Hiroshima, Japan. León, then a third-class machinist's mate, was aboard ship in the South Pacific, close to Japan, when he heard the news of Japan's surrender on a radio.

On Sept. 22, 1945, León received an honorable discharge and returned home to Phoenix, where he still lives today.

Continuing his mother's dreams for her children to be educated, León attended Lamson Business College for one year. After a series of jobs in the carpentry business, he began working for the city of Phoenix as a building inspector.

After the war, he also met his wife, Estella S. León. Although León doesn’t remember the first time he met her, he knows she does.

The two were married Nov. 25, 1951, in Phoenix, and only a couple of years ago celebrated their 50th anniversary.

Together, they have four children: Philip, Alexander and twins Patrick and Patricia. León also has three grandchildren.

To this day, León instills in his grandchildren his mother’s same message of the importance of education. In fact, León made a deal with his grandson, Christopher, that for every A he received, León would give him $5.

"From seventh grade, he's cost me money," León said. "He has never gotten anything but As and A-pluses."

In his retirement, León made three goals for himself: travel to Alaska, return to Pearl Harbor and step foot on a modern aircraft carrier. With his family's help, he has been able to do all three.

Out of all the success León has had in both his family and professional life, the accomplishment he is most proud of is he and his brothers’ service during WWII.

"None of us even earned a medal. There was really nothing outstanding about our service," León said. "The only thing I think is outstanding, and I'm very proud about this part, is that all five of us were in the service at the same time and overseas at the same time."

Mr. León was interviewed in Phoenix, Arizona, on January 4, 2003, by Ismael Martinez.