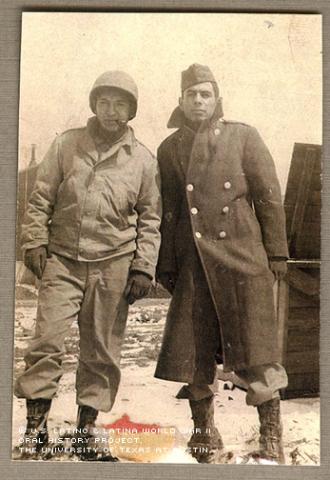 On Sunday, Dec. 7, 1941, Rudolph Tovar was a halfback marching his football team down a Los Angeles football field toward the goal line. Captain of the Verdugo Knights, Tovar and his teammates were informed during a timeout on the sidelines that Pearl Harbor had been bombed early that morning by the Japanese.

The next day, after President Franklin D. Roosevelt had declared war on the Japanese and entered America into World War II, Tovar and his friend, William Rubalcava, traveled to downtown Los Angeles to the Federal Building, to enlist in the Marine Corps.

Rubalcava enlisted and was later shipped out to Guadalcanal. But Tovar was turned away because, having been born in Mexico, he wasn’t a U.S. citizen.

Despite his citizenship status, Tovar was drafted by the United States Army a little more than a year later, in 1943.

He was sent to Fort Lewis in Washington for basic training. During his time there, Tovar was asked if he wanted to become a U.S. citizen. Either way, he was still going to have to serve in the Army, so he reasoned he might as well gain his American citizenship.

"They sent me to Tijuana, Mexico, courtesy of the U.S. government. I had to go across the border and then return to the U.S. to make a legal entry," wrote Tovar in his autobiography.

In retrospect, his one regret was that upon re-entering the U.S., he changed his name on his legal records from Rodolfo to Rudolph.

The second oldest of four children, Tovar was born in Juarez, Mexico, in November of 1922. During his early childhood, his family moved first to El Paso, Texas, and then on to Los Angeles, where he attended Jefferson High School. At Jefferson, Tovar says he was a member of a city-championship mile relay team, played football and loved to box.

"I was a fast runner, but when I got to Jefferson [High School], I found out that I wasn't very fast, because we had the fastest runners in the city, and they were all predominately black," Tovar said. "So I reverted to the distances then."

After graduating from Jefferson High, Tovar predominantly participated in team sports around the Los Angeles area. It was while playing with the Verdugo Knights that his life -- like thousands of Americans -- would be changed forever by the U.S. entry into WWII.

At Fort Lewis, Tovar received demolition training before being transferred to Camp Roberts in California, where he joined the 342nd Infantry Regiment, 86th Infantry Division.

The regiment trained in California and then shipped out to the Pacific Theater for the war with Japan.

Tovar's regiment was sent to Manila in 1945. He was assigned to an engineering unit in which he operated tractors and cranes. His outfit cleared roads and helped clean up some of the damage left behind by the war.

It was during his tour in the Philippines that Tovar says he noticed considerable racism by white soldiers toward Latino GIs. He remembers also noticing how white soldiers treated the local Filipino population.

"Most of us Latino soldiers got along fine with the Filipinos," Tovar said. "Because we could relate to them more because of our skin color, our history and because we could communicate with them in Spanish."

While his time in the Philippine Islands was brief, he says he continues to remember the experience vividly.

"I was not a world traveler, and I was brought up in the barrio, but it opened my eyes to a lot of things," Tovar said.

His strongest recollections are of friends with whom he grew up in Los Angeles.

"There were so many young men in my neighborhood that died in the service -- guys who lived two, three doors down from me," he said.

After his time in the military, Tovar returned home to Los Angeles and resumed his education, taking classes at East Los Angeles College and Cal State University. He says he eventually received his Bachelor of Arts in 1974 from Cal State-Los Angeles.

He married Esther Cosio in April of 1949; they eventually had five children -- Rudy, Michael, Edmund, Randolph and Adela (who died at birth) -- and nine grandchildren.

At the time of Tovar’s interview, the couple lived in Los Angeles, where Tovar remained active, doing gardening around the house, as well as reading books on political and historical topics, his own place in history sealed.

Mr. Tovar was interviewed in Los Angeles, California, on September 26, 2003, by Henry Mendoza.