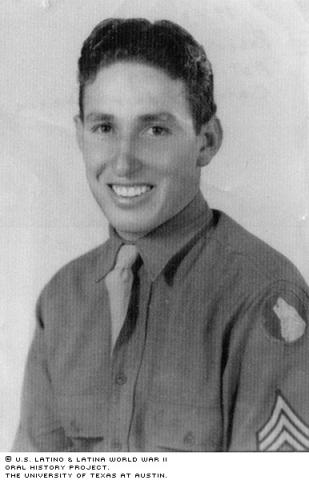 When Roberto Chapa enlisted in the United States Army on December 2, 1942, he had no idea how much this decision would alter the rest of his life.

Though the war was thousands of miles away in Europe and Asia, Chapa, from the border town of Roma, Texas, was one of thousands of Mexican Americans to participate in the war and later to take advantage of the educational benefits created for veterans.

Chapa, 77, sat in his cozy south Austin home with his legs crossed and hands folded as he reflected on his life. He smiled as spoke about his wife, Estela, two sons, Robert and Ricky, his eight grandchildren and one great grandson. He was somber as he described the dangers of modern warfare and his military life. And he was jovial as he recalled his early years in south Texas. Chapa spoke with pride of his involvement with the Hispanic community here in Austin and his role in its education.

Born in Salineno, Texas, November 25, 1922, Chapa grew up near Roma where he went to school and worked on his father's ranch, raising cattle and growing cotton and other crops.

"Hard work, very hard work," Chapa said, as he recalled his life on the ranch.

Chapa, along with his two brothers and two sisters, worked long days on the ranch.

"I was responsible for everything; I was the oldest in the family so I had to help my father," he said.

Chapa's school life was not much easier. Living outside of town, Chapa remembers his ignoble country bus ride, ten miles to and from school everyday.

Chapa came of age in the late 1930s, during the height of the Great Depression.

"We were poor...but, [not too] poor. We always managed to live well because we grew many of the things that we needed to survive...beans and the like, and we always had meat," Chapa said.

Living in a predominantly Hispanic community, Chapa did not experience a segregated school system, and had little contact with Anglos and other ethnic groups. But as the Depression drew to a close and Chapa graduated from Roma High School his days of seclusion were soon to end.

"The training that they gave me...getting up at 4 in the morning...it's just like being in the army," he says.

By the time the war began, Chapa was ready to serve his country.

"I was a volunteer...but, a lot of the soldiers in World War II were drafted. They came from whatever environment...and whatever kind of work they were doing...[so] it was very difficult for them. I had been in the CCC...so it helped me out a lot," Chapa said.

Not only did the CCC prepare Chapa for his military service, it also gave him contact with people from all over the country.

"[It was] very, very interesting...[and I even] became good friends with some of them," Chapa recalled.

When Chapa went to Camp Adair, Oregon for his basic training he had already developed more confidence and a better sense of himself, which would be key during his time on the front lines.

Chapa enlisted in the army at the age of 20 in 1942. By the time he and the 415th Infantry were deployed in France in October of 1944, he was a Staff Sergeant, in charge of communication for Company B. Chapa was in Europe during some of the most intense months of the war.

When asked what it was like being shot at for the first time, Chapa replied: "The first time was pretty scary...any veteran that would tell you that they were not scared was lying."

Chapa saw action in France, Belgium, Holland and Germany. Chapa's company specialized in night attacks, which were intended to cut the German supply lines. Chapa recalled what it was like to be in the field, in the middle of the night, taking fire from German artillery:

"They had a lot of fire power and their weapons were more powerful than ours,'' he said, "All you would hear was a 'clank' over there and the [shells] were right on top of you."

Chapa remained in Europe until the end of the war in 1945. Witnessing death, shell-shocked friends and the interrogation of German prisoners made Chapa realize the nature of combat.

After he returned home in August of 1945, the war abruptly ended when President Truman ordered the dropping of the atomic bomb.

Life After the War

As a result of his military service, Chapa was able to attend college on the GI Bill, when he returned from the war. Chapa chose Saint Mary's University in San Antonio, Texas, and earned his degree in accounting.

"I knew...and lots of my friends knew, that this was an opportunity that we had to take advantage of...I knew that I had to go to school and get a degree and better myself," Chapa said.

After Chapa received his degree he became a teacher. In 1951, Chapa got a job in San Marcos, Texas, where he ran into something that he was all too familiar with, being a Mexican American. Chapa and his wife tried to rent an apartment with some friends near Southwest Texas State University, but the Anglo landlord would not rent to them because they were Hispanic.

"I got so mad...this was the attitude of the people in San Marcos...so I said 'Look, I just came back from the war, fighting for this country...I gave my life to serve this nation and I come here and you tell us that we cannot get this apartment because we are Spanish speaking and you're afraid that the Anglo people...would not like it'," Chapa said.

The head administrator of the university handled this situation, but its pattern is one that Chapa has noticed throughout his whole life, even though Chapa said that the prejudice directed towards him was minimal, perhaps being that he has fair skin.

Chapa even remembers some of the priests at St. Mary's showing prejudice to Hispanics, but his determination was just too strong.

"No one person is superior to me...we are all equal, you recognize a person for what they are and treat them right," Chapa said.

Chapa and his family moved to Austin in 1967, where they have lived ever since. Chapa has been an active citizen in Austin for 32 years. Besides being a board member for "Mexic-Arte," a museum for Mexican American culture, he is a Lions Club member and is involved in organizations to help mentally handicapped people. Chapa is also involved with the Boy Scouts here in Austin and is currently working on a fund raising banquet for Hispanic students. Chapa also served in the Army Reserve for 22 years and was treasurer for Austin City Councilman Gus Garcia for seven years.

Chapa is the first to admit that none of the many things that he has accomplished would have been possible without an education.

"Being open minded and educated you are equal to anybody," Chapa said.

Yet, Chapa also feels that more "doors need to be opened" for Hispanics and other minorities.

"There has to be a means where every child in this country has a chance at an education or a chance to prove themselves, then there's some good in everybody,'' he said. "You [can't] tie them down and choke them."

As a veteran, Chapa says he has an immense love for the country that he put his life on the line for.

"This is a great country. There's no other country like it in the world," Chapa said.

But, Chapa argues that the country's greatness may best be shown through the little changes made on an individual level. He feels that more understanding is necessary to fix the racial problems that are still evident around the country.

"Prejudice is an evil thing...[but] young guys are the ones who will have to make that change," Chapa said.