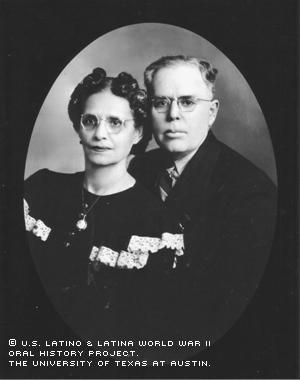 At the Vega home in East Chicago, Ind., during World War II, there were five blue stars in the window -- one for each of the sons serving in the military. Raymond Vega was one of them, serving aboard a ship as a hospital corpsman, tending to sick and wounded men. It was that experience that would lead him to devote his life to his faith, as a Roman Catholic priest.

Sailing in the South Pacific, aboard the USS Long Island, Vega had thoughts of being killed by a torpedo.

"When you have a thought like that for two years, you learn to pray," Vega said.

There was also the gratitude when he and his other brothers all returned home. Only Martín, three years older than Raymond, was wounded, taking a piece of shrapnel to the shoulder while serving with the 105th Engineer Combat Battalion in Germany in 1944. He fully recovered.

The son of Mexican immigrants Matí¬as Vega and Maria de Jesús Martinez, Vega was born in Indiana on April 22, 1924. Before migrating permanently to the United States to work as a blacksmith, Matí¬as had already crossed the border several times, harvesting crops to send money back to his family in Terán, Mexico. The couple brought their family to live in East Chicago in 1920. Vega was the seventh child, born in 1924. Eventually, the couple had 12 children. Once, Vega asked his father why they migrated, and his father answered: "Because I couldn't feed you."

Despite the Great Depression, the Vega family made ends meet.

"I never went hungry in all my life," Vega said. "The older I get, the more aware I am of the tremendous sacrifice my parents made."

He came to enjoy growing up in East Chicago, recalling the mixture of ethnicities -- Mexicans, Poles, Germans, Irish, Italians, Hungarians and Greeks -- that widened his perspective on different races.

"There were a dozen nationalities in our neighborhood," Vega said. "[I] grew up knowing people whose origin was from other parts of the world."

As a youth, Vega's parents taught him both Spanish and English. His favorite hobby was reading, and he became a regular at the local library. The ability to speak Spanish was seen as an asset, even at school, he remembers.

His first job would come at the age of 16, when he went to work with the Elgin, Jolieh, and Eastern Railroad, driving spikes into railroad ties. The job lasted for only three days however, as a supervisor told him not to come back.

"I guess I must've been lazy," said Vega with a laugh.

He wasn't lazy when it came to school, however, and in June of 1942, he graduated from Washington High School in East Chicago. The U.S. had already been at war for more than six months, and Vega's older brother, Carlos, was serving in the Navy, aboard the USS California. Vega had already decided he was going to follow in his brother's footsteps. After he entered the military in 1942, brothers Martín, Manuel and Robert also joined.

After taking his six weeks of basic training, Vega recalls speaking with a graduating sailor, who told him about hospital corps school. Vega took an IQ test, in which he was given choices regarding what he wanted to do in the Navy, and he checked off "hospital corpsman."

As a hospital apprentice, Vega embarked on a train from Chicago to San Francisco with other new recruits, and he could feel the anticipation among the others.

"There was no sadness," Vega said. "There was excitement."

Vega was serving aboard the USS Long Island, which carried planes and pilots to battles in the South Pacific.

"We went to Pearl Harbor, Samoa and the Marshall Islands," Vega said. "As a hospital corpsman, whenever anybody got sick, they had to come to me."

He says his position as a hospital corpsman kept most of the others on his good side.

Vega's service aboard the USS Long Island lasted from 1943 to 1944. He says the war effort of that aircraft carrier was so important that it would travel alone, so as not to attract the attention of the enemy.

Vega remembers the scene on both V-E day and V-J day.

Since he’d signed on for six years of service in the Navy, Vega, now a hospital man first class, had a few more years left.

After he received an honorable discharge from the Navy in 1948, he returned home to East Chicago and used the GI Bill to attend traffic-management school. He then became a shipping clerk for Summit Fast Freight, a trucking company.

Yet ever since his days aboard the USS Long Island, he knew what he really wanted to do, and in 1955 he accepted his life calling as a priest.

He began studying at The Divine Heart seminary near Plymouth, Ind. After becoming a member of the Priests of the Sacred Heart of Jesus, Vega got in touch with immigrant laborers in the outlying areas. He served as a priest in these camps for the next 11 years.

"They would come to me, not so much as to request help, but to listen to religious instruction," Vega said.

Vega became aware of the tough conditions for many of these workers. He says he contacted the Indiana Department of Health about these issues and looked after the workers, to make sure they weren't being abused.

In 1968, Vega traveled to Indonesia to do missionary work. Like his parents before him, he learned to adapt to a new country. He even managed to learn the native language, Bahasa Indonesia.

After working in Indonesia for seven years, Vega served as a priest in different locations in the U.S., living in Brownsville, Texas; Milwaukee, Wis.; and Sioux Falls, S.D., where he worked at a veteran's hospital as a chaplain. While there, he says he was chosen in 1991 to give the invocation at a special mass marking the 50th anniversary of the attack on Pearl Harbor.

After moving to Pinellas Park, Fla., Vega devoted time to volunteering at Freedom Village, a home for the physically disabled.

Mr. Vega was interviewed in Pinellas Park, Florida, on December 12, 2003, by Violeta Dominguez.