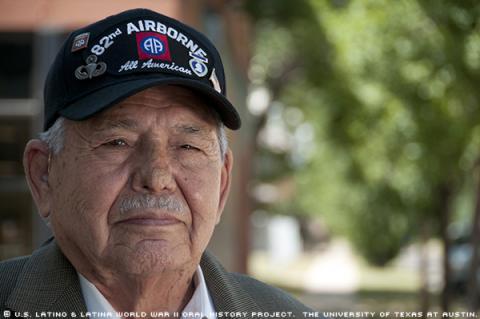 It was Nov. 26, 1943, and Pvt. Raymond Alvarado played poker with his buddies on the HMT Rohna as it sailed along the coast of Algeria. The soldiers were relaxed. They chatted about their wives and girlfriends back home, about the smells of home-cooked Thanksgiving meals, about the comfort of a real bed.

Alvarado remembered he was dealt a good hand. “I had a dead man’s hand: aces and queens.” Little did he know that a few hours later the reality of death would be all around him.

He was assigned to the 853rd Engineering Aviation Battalion and was one of the 2,193 people aboard the Rohna, which was part of a 24-ship convoy sailing to the Suez Canal. A German guided missile struck the Rohna, and 1,138 people were killed, including 1,015 Americans. Alvarado was among 600 survivors.

“I thought I was going to die and go to hell,” he remembered thinking, “and I deserve it because I was so mean [to] my mother.” He said he opened his eyes, looked around, and thought he was in hell. “There was black smoke, fire, blood everywhere,” he remembered, “and the men … were all torn into many body parts.” Accounts from other sources also described bodies and body parts covering the deck of the ship as it sank.

Alvarado jumped off with a life preserver, along with fellow American, Sgt. Louie Snyder. They floated on one of the ship’s loading docks for 12 hours. As the waters began to calm, they encountered another American survivor, a Capt. Johnson, who held a flashlight. After almost 12 hours, the very faint glow from the light was just enough for the USS Pioneer to detect them and pull them out of the water.

The rescuers thought Alvarado was dead until they began to tag his toe, and he moved, startling the workers.

Alvarado said he “will always be thankful to the Lord for pulling him out of the mess on the ship.”

Alvarado lost his pinky finger, and he spent a month in a hospital tent in Africa. From there, he was sent to the China-India-Burma Theater to join the 853rd Battalion. A news release from U.S. Army Public Affairs on Sept. 15, 2004, credited Alvarado with saving the lives of two Americans and three British sailors after the sinking of the Rohna.

The attack on the Rohna was noteworthy because it resulted in the greatest loss of troops at sea in U.S. history -- 1,015 Americans out of the 1,138 men were killed. More lives were lost on the Rohna than on the USS Arizona at Pearl Harbor on Dec. 7, 1941.

After the war, when Alvarado spoke of the Rohna, no one believed him because the government had suppressed news about it. The deaths of more than 1,000 people aboard a ship near the Suez Canal were too unbelievable.

“I did have a chip on my shoulder when we came out of the war and nobody ever knew what happened,” said Alvarado, who struggled with Post-Traumatic Stress Disorder since the incident.

The U.S. government kept the incident a secret until 1967, when it was unveiled in response to a Freedom of Information Act request. Later, in 2000, after intense campaigning by The Rohna Survivors Memorial Association, the U.S. government formally recognized the attack and the deaths of the 1,138 men.

Despite the gradual release of information, the incident is still unknown to many Americans. Alvarado, who now lives in Littleton, Colo., recently started a non-profit group called the Torch of Remembrance that will work toward educating the public about the incident. He and other survivors of the attack believe that the day Nov. 26, 1943, should be remembered and honored by all Americans. The original goal of the Torch of Remembrance was to create a memorial at the Colorado State Park at Chatfield Dam. The group’s newsletter documents survivors’ stories, members march in veterans’ parades, and Colorado governors have commemorated their tragedy and their efforts for more public recognition.

Little from Alvarado’s past could have prepared him for his WWII service. Most of his childhood was spent in Portland, Colo., a small town about 100 miles south of Denver.

His mother, Rosario Rivas-Alvarado Romero, worked primarily in the laundries. Alvarado’s father, Bernard Alvarado, worked for a Colorado mining company and died in an accident at the plant when Alvarado was only 3 years old. His mother later married Salvador Rivas, who became Alvarado’s main father figure. When he died, Alvarado was devastated.

Alvarado quit school and stayed in Colorado, working in the Youth Training Corps and in CCC camps in Grand Junction and Hugo. He earned a GED from the Emily Griffith Opportunity School. He later attended Colorado University Denver Center and Goddard College. He studied Chicano Studies and planned to become a teacher.

After returning to Colorado for two years after the war, he joined the 82nd Airborne Division from January 1947 to March 1950. He attended jump and leadership schools and later served as a jumpmaster. For his second tour of duty, he earned jumpmaster and leadership certificates, the Expert Infantry Badge and the Parachute Badge.

From 1968 to 1974, he worked with the Crusade for Justice, a Chicano civil rights organization. He is also a charter member of the National World War II Museum.

He married Emily Martinez in March 6, 1965, and they had eight children. The family lives in Denver. Alvarado taught his wife how to play the guitar, and they formed “Los Alvarados,” performing at venues from California to Puerto Rico. Now retired, they still play the guitar at their church.