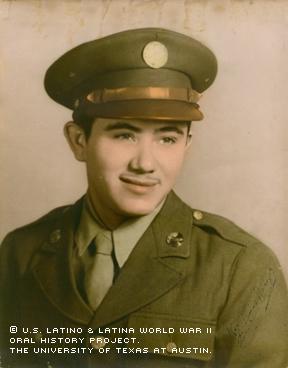 Life wasn't easy for Raul Rios-Rodriguez, who grew up on the mean streets of New York City throughout most of World War II. You had to fight for respect to survive, he says, and he learned that lesson at 14 upon arriving from Puerto Rico at the onset of the war.

Rios and his four brothers and four sisters moved to Spanish Harlem in New York in 1941. An older sister was the head of the household while Rios' parents remained in Puerto Rico, where his dad grew crops he sold at market.

"As kids we'd fight with the blacks, fight with the Italians," Rios said, "Some were friends ... but it didn't matter when you go to different areas. It was about territories and cliques."

Rios still has a scar hidden under the thick layers of hair on the back of his head from the time one rival gang member whacked him with a vacuum cleaner pipe.

Joining the Army in 1945 was the only practical way he saw of getting off the streets and, at the same time, helping out the United States in the war effort, he says. His brothers joined the Marines one by one, and each one came back with stories about the blood and gore of war. But that didn't discourage him from signing up.

"Hey, you gotta defend your country. You gotta go, you gotta go," he said. "Those were real, real war times, but I wanted to join anyway."

Rios enlisted in the U.S. Army with two of his Latino friends in September of 1945. He was sent to Fort Devens in Massachusetts for basic infantry training, leaving his sisters and a girlfriend in New York.

He recalls how some of his fellow draftees were scared as they were being prepared to go to war. Some men pretended to be crazy by wetting their beds so they could be sent home, he says, adding that he tried to give them words of encouragement and convince them they were participating in an honorable cause.

At Fort Bragg in North Carolina, Rios says he encountered a strict drill instructor who was particularly harsh toward the Hispanic and black soldiers in his unit. And he remains resentful of the discriminatory treatment Latinos and blacks received during basic training.

"We were all soldiers; we were all risking our lives for the United States. That should have never been done. Never," he said.

Rios celebrated V-J Day while still in basic training. He was shipped to Le Havre, France, assigned to guard bridges and supply depots in France and Germany with the 18th Infantry Regiment, 1st Infantry Division.

He was amazed at how much devastation the war had caused.

"I saw Frankfurt when she was all kaput, now I see her and, wow, she's like New York," he said.

"Everything happened so fast," he said. "After a while, I liked the Army. If it wasn't for my girlfriend, I would still be in the Army," he said.

Back in the U.S., Rios married his girlfriend, Irma Burgos, and opened a beauty parlor. The two had one son and one daughter before divorcing. According to Rios, civilian life wasn’t enough for him, and Irma was jealous of all the attention he received from the female customers at their beauty shop, so he enlisted with the U.S. Merchant Marines in 1949.

His time ended with the Merchant Marines while he was working as a waiter on a ship transporting officer's wives and families from port to port. On one particular trip, on a boat headed to New York from Europe, Rios was ordered to clean up vomit in the dining area.

He refused to clean up the mess and engaged in a heated argument with a ship steward. Rios then hit the steward with a food tray and was ordered confined to his quarters.

"And that was the end of the Merchant Marines," Rios said. "I had a bad temper."

Upon his return to the U.S., Rios asked for and was granted his discharge.

At the time of his interview, he had as much vigor and spirit as he did in his younger days. He was living with his sister in Miami, Fla., keeping himself busy by painting houses.

The three tattoos on his forearms might deceive some into thinking he’s a hardened and tough man, but his glowing smile and heartfelt laugh reveal the real Rios.

"If you treat me nice, I don't care what you are, I'll treat you nice," he said.

Mr. Rios was interviewed in Miami, Florida, on September 14, 2002, by Paul Harrigan.