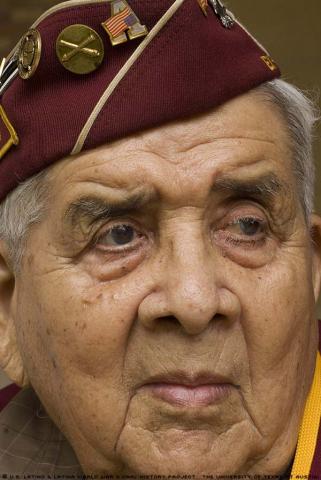 Having grown up in rural South Texas during the Great Depression and having lost his mother when he was only 10, Ramón Villa Sr. knew hardship.

But he was unprepared for the struggles he faced in World War II as part of the U.S. Army’s 200th Coast Artillery Regiment, being captured by the Japanese and forced on the Bataan Death March. Villa endured more than three years as a prisoner of war.

Villa was born on Jan. 9, 1920 in Donna, Texas. His family moved a short time later to Yorktown, Texas.

Having grown up in rural South Texas during the Great Depression and having lost his mother when he was only 10, Ramón Villa Sr. knew hardship.

But he was unprepared for the struggles he faced in World War II as part of the U.S. Army’s 200th Coast Artillery Regiment, being captured by the Japanese and forced on the Bataan Death March. Villa endured more than three years as a prisoner of war.

Villa was born on Jan. 9, 1920 in Donna, Texas. His family moved a short time later to Yorktown, Texas.

He recalled that his father, Antonio Villa, worked for the railroad. Once he lost that job, the family moved to wherever he could find work. In Yorktown, Villa said, his parents worked in the cotton fields and farms.

The oldest of three sons, Villa often went into the fields to help. He was in fourth grade when he dropped out of school.

His mother, Simona Villa, became ill and died in 1930, during his early school years. Villa said he did not know what caused his mother’s death.

“She worked very hard. I think she was just tired,” he said.

“So, my daddy was now doing the job of father and mother. We were three boys altogether.”

He recalled that the three brothers usually slept on the floor of the home, which had no indoor plumbing.

He said that his father remarried a few years later.

In 1937, Villa joined the Civilian Conservation Corps, a federal Depression-era relief program in which he worked with other young men to clear land, build fences and erect concrete dams. He later joined the National Youth Administration and worked a few days a month building roadside parks.

A few months after he turned 21, he and some of his friends decided to join the Army. It was April 1941. Germany’s Afrika Korps was rumbling across Northern Africa, while other German units seized Yugoslavia and attacked Greece.

Villa recalled going to his father on the day he was leaving for induction, and his father holding up his hand to bless him. The group of friends intended to walk about 16 miles between Yorktown and Cuero, Texas, where they would catch a bus to Fort Sam Houston in San Antonio.

“We had walked about two miles when we heard the slam of a door, and my father got out of a car. He had asked a friend if he could drive us to Cuero,” Villa said. “Otherwise, we would never have made it.”

Villa was sent to Camp Wallace, near Hitchcock, Texas, for basic training. Then he went to Fort Bliss, in El Paso, Texas, for additional training. In August 1941, his regiment was sent by train to Angel Island, Calif., and then by ship from September to November 1941 to the Philippines, where it was assigned to Clark Army Air Field.

The U.S. Army’s 200th Coast Artillery Regiment included many Latinos, he said. Many had been part of the National Guard in New Mexico, which was pressed into federal service on Jan. 6, 1941.

Villa was at Clark, in the Philippines, on Dec. 7, 1941, when he heard that Japan had just attacked the United States at Pearl Harbor. The following day, Japanese aircraft began attacking Clark Field. American forces fought them off for as long as they could, Villa said. But eventually orders came to retreat to the Bataan Peninsula.

“We had to clean ourselves up wherever we could; lakes, rivers. We never took our shoes off for more than a month,” he said. “We had no more rations, and the equipment we had was going bad. The artillery jammed. We were waiting for reinforcements... They drove us to where we couldn’t anymore.”

The American and Filipino troops surrendered on April 9, 1942, and tens of thousands started the 12-day, 86-miles forced march from Bataan to Camp O’Donnell. Hunger, disease and abuse by the Japanese killed thousands of them along the way. Villa said that, after a couple of days on the march, he saw an old truck drive by and some of the men on it knew him and called out his name. They helped him jump into the truck bed. The men were being taken to help install barbed wire fencing around Camp O’Donnell.

He recalled seeing the men who had suffered through the entire march arrive in horrible condition. Some had feet worn down to the bone, he said.

After a few weeks, Villa was part of a crew of prisoners taken back to Bataan to locate equipment abandoned by American forces. He saw countless dead soldiers along the road.

At Camp O’Donnell and others (Cabanatuan Camp #3 in the Philippines; Las Pinas Camp #4, Formosa, and Kobe and Maibara, in Japan) he would be sent to later, Villa saw firsthand atrocities committed against his fellow soldiers. He recalled how five men who tried to escape were taken into a building and savagely beaten, and then placed on a fence so anyone passing by could also beat them. He saw the body of a man who had been decapitated and left under a “Bad Man” sign. He also witnessed men being executed by firing squads.

Villa was among those who in 1944 were loaded onto an old freighter (the Haro Maru, a hellship also identified on veterans’ websites as Hokusen or Benjo Maru) and, under inhuman conditions, transported to Formosa, now known as Taiwan, to work as slave labor on a sugar plantation. Many of the prisoners did not survive the journey. After several months, he and others were taken to Kobe to help unload ships.

He was in Japan when the war ended, although he and his fellow prisoners did not know anything about the dropping of the bombs at Hiroshima and Nagasaki in August 1945. They learned about the end of the war from American soldiers who passed by on a train. Later, U.S. planes dropped rations and supplies in 55-gallon drums.

Villa, who lost about 70 pounds during his captivity, returned to Manila and was able to find his brother, Mike, who was also in the Army.

He returned to Texas and married Ygnacia Muniz in July 1946. They had four sons and a daughter, who died as an infant. His wife passed away in 2001.

When asked what advice he would give to young people, he said simply: “I would say, don’t give up.”

(Mr. Villa was interviewed by Amanda Abrigo in Hallettsville, Texas, on July 20, 2010.)