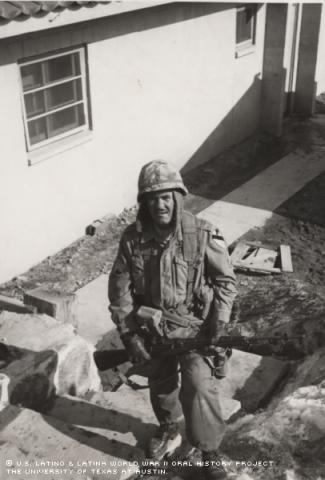 Though also a veteran of the Korean and Vietnam Wars, Rafael Hernandez says it was World War II that created significant opportunities for Latinos.

"That was the best thing that happened to me: to go ahead and serve my country, fight for something that I believe and, at the same time, better myself," said Hernandez, who enlisted in the Navy on Oct. 10, 1944, on the encouragement of his two older brothers, who were in the Army. He was trained in minesweeping equipment, and with the crew of the USS Gheradi, he destroyed floating land mines in the Pacific Ocean. The Gheradi participated in the Battle of Okinawa, during which Hernandez served as a gunner and loader of a 20-mm firearm, shooting down enemy aircraft.

After his discharge, Hernandez attended an aircraft and mechanic school in South Texas’ Harlingen. His first marriage gave him a daughter, Cynthia, but ended in divorce. On June 3, 1950, he married his childhood sweetheart, Maria Gloria Fernandez, and with her raised Juan Jose and Maria Lourdes.

Hernandez volunteered to organize the 112th Calvary Regiment of the Texas Army National Guard in McAllen, near Harlingen. In Korea, he guided an Army rifle squad as a staff sergeant. In 1964, he trained soldiers in jungle survival and battle tactics in Panama and infantry tactics in Fort Polk, La.

"You could get hit from anywhere," he said.

In Ahn Loc, Hernandez and his unit were securing a place for a helicopter to land and pick up wounded, when he was suddenly hit in his leg and back. He turned and saw he was the only one left standing.

In 1980, he retired as Master Sergeant. He became manager for an alarm company and, later, a technician in the reconstruction of Auto Marts. He joined many veterans' organizations: the American Legion, Veterans of Foreign Wars and the Military Order of the Purple Heart.