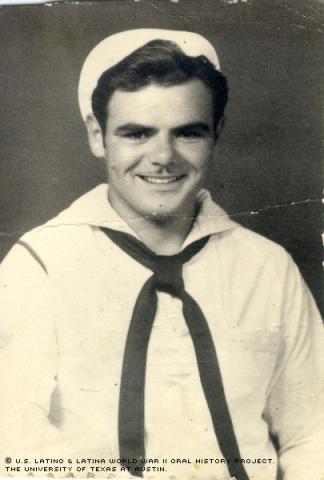 As a child in southern California, Pete Salcedo hid in embarrassment during lunch to eat homemade tacos.

"At that time you didn't have all these Mexican restaurants," Salcedo said. He thinks their growing popularity in mainstream America caused him to stop hiding his Mexican food.

Born in Sespe, Calif., near Ventura County, Salcedo saw other instances of racial tension. His childhood friend Felix Salvador, half African American and half Filipino, was teased about being "dirty." Salvador entered the military and became a sergeant, quit briefly due to discouraging remarks about his race and later returned to the Army and became a full colonel.

When he was drafted in September of 1943, his father, Mariano Salcedo, a foreman for San Diego Transit, offered to buy a place for him in Tijuana, Mexico, if he refused to go to war. Salcedo, then 23, declined his offer and decided to serve in the Navy. He later served in Hawaii.

Today, he lives in National City, Calif., where he retired after working with aircrafts in the civil service.

During the war, Salcedo said he slept in a tent with six men, including one from Texas who often made negative remarks against African Americans and Latinos.

"I was afraid of Texas. Heard of what they'd do to the Mexicans," Salcedo said. But he later ate at a restaurant in Texas and had a good experience, discarding his previous fears about the state.

As a young child, Salcedo, along with brothers Larry and Butch and sister Guadalupe, began to lose his proficiency in Spanish.

"I'd go to school, learn English, then come back and Mom and Dad would ask me in Spanish and I'd answer them in English," Salcedo said.

His father married his mother, Magdalena Cancolla, in the United States, but both were born in Mexico.

"I'd ditch a lot of school," Salcedo said, noting his parents didn't punish him very often. He quit high school while in 10th grade because he lacked motivation.

He credits his wife, Maria Salcedo, with his ability to speak Spanish.

"If I hadn't married her, I don't think I'd speak Spanish," Salcedo said. "I still can't speak it too well."

Salcedo's brother Butch was also in the military, serving as a lieutenant in Italy. Butch, too, faced discrimination: Salcedo said although Butch was wearing his uniform, he was refused service at an El Paso, Texas, restaurant.

Salcedo remembers buying a hamburger on Logan Avenue, near his current residence, when he first heard the Japanese bombed Pearl Harbor on Dec. 7, 1941.

"I didn't even know what Pearl Harbor was," he said.

Salcedo would later serve on the island on which it was located -- Oahu, Hawaii -- for four months as Master of Arms, 2nd Class. His job was to make sure everyone entering the canteen was dressed properly. Before working in Oahu, he arrived on the island of Maui in 1943, where he repaired military ships for 18 months. Most of his supervisors were white.

"They handed me a rifle and gun ... Said there was a submarine close by ..." he said. "I didn't even know how to load the damn thing."

"It's no good, for anybody that gets killed," he said.

However, he believes there are many instances in which the U.S. should get involved, pointing to past interference with communism in Russia and China during the Cold War.

Salcedo developed a foot fungus in Hawaii. After it healed, he was discharged in January 1946.

Returning to San Diego, he regained his previous job at Trim n' Drill. According to the GI Bill of Rights, military employees would have the opportunity to resume their old jobs at the same wage. Salcedo made $1.03 per hour before the war, but his wage then dropped to 75 cents an hour.

Unhappy with the decrease, he searched for other jobs. He cleared weeds for San Diego Transit for a few months, where he "realized, ‘[I] should have stayed in school.’"

He then went to school to become a riveter, but instead became a painter so he could get a job right away.

Long after the war ended, Salcedo became increasingly aware of prejudice against Latinos. In one instance, he had to retake a test while applying for a supervisory position sought by only one other competitor. While the job was awarded to the other person, Salcedo suspects his race was the reason for his rejection.

Salcedo continued painting to support his family and became involved with the Veterans of Foreign Wars (VFW). In addition, he received a high school diploma. Salcedo has learned from his mistakes and regrets dropping out of high school; he stressed the importance of finishing secondary school to his grown children, Betty Jean Johnson, Peter, Jr. and Mariano.

When asked if there was there anything he missed while serving in the Navy, Salcedo answered with a laugh, "Yeah ... taquitos that I used to be ashamed of."

Mr. Salcedo was interviewed in National City, California, on December 10, 2000, by Rene Zambrano.