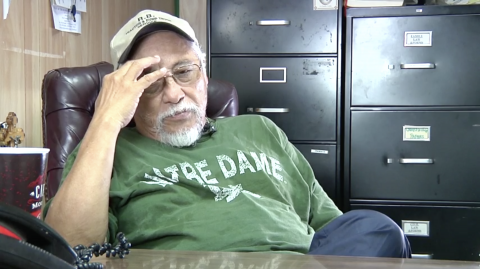 One evening during the early 1970s, a crowd much larger than the usual Latino activists who periodically met in Rosenberg, Texas, poured into the local A.W. Jackson Elementary School to listen to a speech by Congresswoman Barbara Jordan.

Paul Cedillo, an attorney and activist who first contacted Jordan about the disenfranchisement going on in his community, recalled the moment as a milestone for minority communities in the then-segregated Texas town.

Jordan's oratory was electrifying, as she talked to local Hispanics about changing the system.

"She moved the people," he said.

The young lawyer had been involved in local politics and activism for some years. When he was a student at the St. Thomas College of Law, Cedillo worked actively to work for his community's enfranchisement -- running for several city and county offices in the late 1960s and early 1970s, and supporting the bids of other Hispanic leaders.

While his candidacies for several judicial and school board positions were not successful, he still achieved his mission -- to show the Hispanic community in Rosenberg that their vote mattered, and that they, too, could take part in local governance.

"We accomplished what we started out. I would get publicity for my name and I would get the people to vote," Cedillo said.

From a young age, Paul Cedillo was not someone to sit on the sidelines while witnessing an injustice. When he was a teenager, he got into a fight with an Anglo friend, who was beating up a Hispanic man at the county fair in Rosenberg.

After the incident, he was summoned to city court as a witness, where a notoriously hostile judge harshly barred him from speaking during the procedures and dropped the case. There was an underlying racial tension - in the beating and also, in the courtroom. This experience, along with other discriminatory action he saw and experienced first-hand in the era, sowed the seeds of what would become Cedillo's career -- fighting for equality.

"I just thought to myself: 'One day I'll be back in this court and you're going to hear me,'" He said. "And that's what happened."

Cedillo was born in Flatonia, Texas, on November 14, 1941, to Paul Cedillo Sr., a mechanic from nearby Waelder, (about a hundred miles west of Rosenberg,) and Ursula Ulloa, a homemaker from Seguin to the west on U.S. 90. He was the second of 12 children.

For many years, the Cedillos divided their time between Wharton and Fort Bend Counties, southwest of Houston.. They lived near East Bernard, where the father worked as a mechanic in a Chevrolet dealership, went to high school in Orchard, and attended Spanish-language services at Our Lady of Guadalupe Catholic Church in Rosenberg.

Cedillo recounted a happy childhood. Even though the Cedillos were the only Hispanics in the East Bernard area, they got along very well with their neighbors and friends, he said.

The children were also treated fairly at the Catholic elementary school they attended in that town, as well as at the public high school where they were bused to in Orchard, on the opposite edge of Wharton County. During this period, Cedillo was a star athlete--the first Mexican American to make the "All-District" football team, a fact that to this day fills him with pride.

His experience contrasted with that of many of his friends who lived and went to school in Rosenberg, the closest city with a significant minority population. There, Cedillo remembers, blacks and Hispanics were segregated on one side of town and barred from participating in many social and civic activities.

The first time Cedillo recalled being denied service at a Rosenberg business was in 1954, when he was around 12 or 13. A waitress at a hamburger restaurant told him they did not serve Mexicans.

"It left a lasting impression on me," Cedillo said.

The strong and pervasive discrimination in Rosenberg inspired the young Paul Cedillo to one day work to combat prejudice.

Even though his parents did not have a formal education, and in spite of not receiving any career counseling at school, Cedillo made the decision to go to college at the suggestion of Father Murphy, a Basilian priest at his parish. In 1958, Murphy advised him to visit the University of St. Thomas in Houston to meet with the school's president. In a matter of days, Cedillo was on his way to an undergraduate degree.

After four years of hard academic work -- interrupted by a stint with the Army that took him to an American base in Vicenza, Italy, for two and a half years -- Cedillo graduated from St. Thomas in 1967 with a bachelor's degree in pre-law and mathematics.

This decade-long learning period, in which he left home for the first time for Houston and Italy, led him to face a host of new experiences.

"It opened up my eyes," Cedillo said.

He remembers that in Vicenza, he observed that poor and rich people were treated equally, in contrast to the patterns of segregation that were the norm in Rosenberg. This experience strengthened his determination to fight against discrimination when he returned to the United States.

Back in Texas, Cedillo made the decision to become a lawyer, a decision in keeping with his earlier vow to have his voice heard within the judicial system. While working on his law degree at St. Thomas, which he completed in 1971, Cedillo joined local Hispanic activists such as Antonio Becerra and Dora Olivo in promoting Hispanic political participation and protesting against segregation and disenfranchisement. This small core group was able to galvanize others in Rosenberg within a few short years.

Cedillo and Becerra met with the mayor of Rosenberg and the city council on behalf of aggrieved Hispanic citizens. In these meetings, the activists presented their complaints about segregation, police brutality and the lack of Latinos in law enforcement. The local officials "did nothing," Cedillo wrote after the interview.

Members of the group would also contest local elections to promote Hispanic participation by showing that they, too, could take part in their community's leadership. Cedillo ran for justice of the peace in the late 1960s, and in the early 1970s ran for county judge and twice for the school board.

The activists met periodically at Fort Bend county fair facilities to plan and discuss actions and to document cases of voter suppression. A typical meeting would take place on a Sunday afternoon and last for several hours.

In one such meeting, Antonio Becerra brought up the prospect of elevating the issue of Mexican American voters' rights to the national level by contacting Congresswoman Barbara Jordan, Cedillo recalled. The group thought that through her connection to the civil rights cause, Jordan could help pressure local officials to respect the minority vote in Rosenberg.

The task of recruiting the support of the Houston-born Congresswoman fell on Cedillo.

One month before the deadline for the extension, in a letter dated July 7, 1975, the young attorney appealed to Jordan to support the extension of the Voting Rights Act. The attorney attached signed testimonials from some 15 Mexican American voters who were turned down at the polls or discouraged from voting in the Fort Bend County school board election in April of that year. Jordan responded quickly, visiting twice with the disgruntled voters, and listening carefully as they recounted their experiences. She spoke to citizens about what they could do to correct injustices in the democratic system.

Cedillo recalled her saying that all those people that think we're not going to do anything about changing the system, they'd better think twice.

Jordan's support of the cause was unequivocal. As a congresswoman from Texas -- one of the states with the highest proportion of Spanish-speakers-- she was one of three sponsors of the bill that extended the Voting Rights Act to language-minorities that eventually was passed and signed into law by President Gerald Ford on August 6, 1975.

After that influx of energy, "things just could not go back to how they were," said Cedillo. Minority voters in Rosenberg, subject to all sorts of arbitrary obstacles to their suffrage up to that time, became more assertive in voicing their complaints.

In the years following Jordan's visit, Mexican Americans in Rosenberg gradually increased their participation in local politics, running for, and eventually securing elected office, a trend that culminated in Lupe Uresti's victory as mayor in 1992.

Cedillo said things improved considerably in Rosenberg since the 1970s. The city's economy grew, education was opened to all and Hispanic citizens became better represented in professional and political circles. Now, he said, it is common to see members of minority groups occupy several seats in the City Council, something that in the past would have been unthinkable.

Still, Cedillo acknowledged that there is much to improve in terms of the economic situation and political participation of the Hispanic community. According to him, the biggest problem is that Hispanics do not see voting as a priority as they have more immediate needs, starting with just "making a living."

Looking back, Cedillo said he is proud of the years spent fighting for the advancement of the Latinos in Rosenberg, and of the support that this community has given him throughout his legal career.

Mr. Cedillo was interviewed by Miguel Gutierrez, Jr. in Rosenberg, Texas, on April 26, 2014.