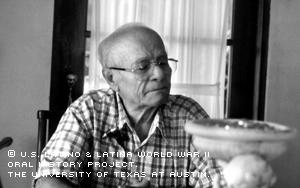 Interviewed By:
Carlos I. Hernandez

En route to Africa on a ship with more than 5,000 soldiers, Octavio Negrón knew he needed to leave home, even if it meant going off to fight.

Negrón had enlisted in the Army at the age of 18, an act he attributes to machismo -- he had to do it, he says, for pride's sake. He left his native Puerto Rico for the continental United States on a rainy day on Dec. 17, 1940, to undergo a medical and physical exam required of all military personnel. He was with other Spanish-speaking companions, a combination of Mexican Americans and Puerto Ricans. It didn't take long for Negrón to befriend his fellow comrades onboard, friendships that would last for about a month at sea and extend during tours of duty in Africa and Europe.

Born Jan. 27, 1922, Negrón grew up in the small town of Naranjito in Puerto Rico. He attended school and learned a bit of English from an American schoolteacher. He vividly remembers playing his favorite sport, volleyball, while in school. He says he and other children would spend the entire hour of recess playing volleyball, baseball or swimming in a nearby river.

Negrón stopped going to school after the fourth grade. He ended up working for his father in the family-owned agriculture business from 7 a.m. to 8 p.m. He says his meager earnings were enough to survive, with a little left over.

But the celebrating was over when he and the other soldiers were shipped off to Panama, where there was much labor to be done. Although the work was arduous, the soldiers found time to dine and dance in the cities of Panama. From there, the troops went to Virginia for three months for more training and were issued a military identification number, which Negrón still remembers.

After serving in the invasion of Africa, Negrón and the rest of the 65th Infantry Regiment were sent to Germany, where they stayed for 10 months. He remembers the censorship of the few letters he wrote to his family in Puerto Rico; much of the correspondence was burned for fear of releasing confidential information, he says.

For relaxation and enjoyment, the soldiers would go to the city and watch cowboy and war movies. Negrón says he enjoyed listening to American music playing on the radio, along with traditional German music.

Then there were the harrowing times in Germany:

"I remember one time seeing a fallen American soldier on the side of the road in Frankfurt," Negrón said.

This image was commonplace he says. But what he and the other soldiers feared the most was being killed accidentally by their men. Negrón says two of his friends died in this manner.

One close call occurred in Germany when Negrón was holding a gun. A man claiming to be an American was suspected of being a German soldier, so Negrón knocked him to the ground with his gun and pointed it to the soldier’s chest. After the man was identified as an American, Negrón says he released him.

The unit then went to France and spent 12 months there. Negrón describes the miserable time he spent there in short words he seems to still remember feeling.

"I was hungry, cold, sleepy, scared and sick," he said.

He recalls a time he felt ill and visited the unit's medic.

"They told me that I wasn't sick, but scared," Negrón said.

The medic's remedy was soup with plenty of water, recalls Negrón, noting that potatoes were the soldiers’ primary meal, along with some occasional meat.

After four years and 11 months in the Army, Negrón and about 4,000 other remaining men returned to Puerto Rico by way of ship.

After arriving from the war in November of 1945, Negrón went on to study and worked in a factory. Less than a year later, he married Julia Nieves Hernandez, whom he met by accident in June of 1946. After close to half a century of marriage, the two have six surviving children of seven, 18 grandchildren and seven great-grandchildren.

Mr. Negrón was interviewed in San Juan, Puerto Rico, on January 30, 2003, by Carlos I. Hernandez.