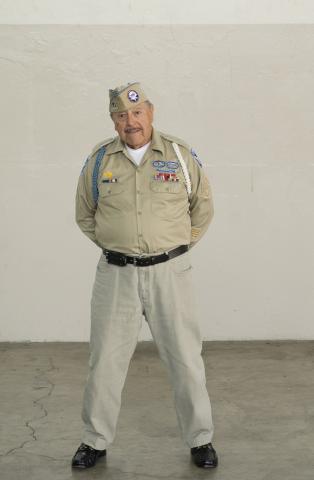 Growing up in an artistic family that moved between the United States and Mexico, Noe Espindola was immersed in two cultures and languages. In time, however, he was given the opportunity to serve his native country -- the United States -- during World War II.

Espindola was born June 27, 1926, in Austin, Texas, one of four children of professional musician Ranulfo Espindola and Maria de Jesús Arias, both natives of Mexico.

The Espindolas were a bilingual, working-class family. They moved around from Texas to Southern California and Mexico City due to Ranulfo's work. Noe remembers his mother making tamales and speaking Spanish at home.

When Espindola’s father passed away in 1938 in Mexico City, the family moved back to Los Angeles. His older sisters, Anna and Carmen, stepped up and helped raised him as his mother was absent for long periods, working as a trapeze artist with the Ringling Brothers traveling circus and as an extra in various movies.

Espindola recalls that his classmates sometimes made fun of him because of his accent, but he did not mind the teasing. In fact, he usually gave it right back to the other children for their clumsy attempts to speak Spanish.

Espindola said he was a “regular boy, with regular boy jobs,” such as delivering newspapers.

He recalls being a hard-working student and dreaming of becoming a doctor. However, the limited curriculum of his school, Lincoln High, eventually made him abandon that aspiration.

With a career in medicine out of reach, Espindola opted to join the military. He was rebuffed on his first attempt to enlist because he wasn't of age. Finally, in 1944, he was able to join the U.S. Army.

After basic training at Fort Roberts, in San Miguel, California, he was shipped to the Pacific Theater with the 11th Airborne Division during the last stretch of WWII.

Espindola recalls being solitary during his time in the war.

“All of the friendships we made on the ships disappeared when we landed,” he said.

His experiences in the war had a lasting impression on him. Espindola remembers seeing people so close to death and knowing that it could happen to him.

His first kill was something he held close: a Japanese soldier he shot as he was charging toward him. He had been told that soldiers should keep something from their first kill. And that is what he did: He took the flag from the man that he had killed. It is Espindola’s own little piece of the war.

Racism was a minor issue at the military camps, Although Espindola said many Anglos treated Mexican Americans with disrespect, he fought to defend himself and to be seen as an American. He recalls people giving him a hard time and saying ignorant things about Mexicans.

Upon returning home from the war, Espindola married his sweetheart of four years, Barbara Burgess, and started a family. The couple had two children, Sharon and Noe Jr. He worked as a mechanic and later worked in management at an auto body shop.

Mr. Espindola was interviewed by Phillip Rodriguez in Los Angeles on June 9, 2010.