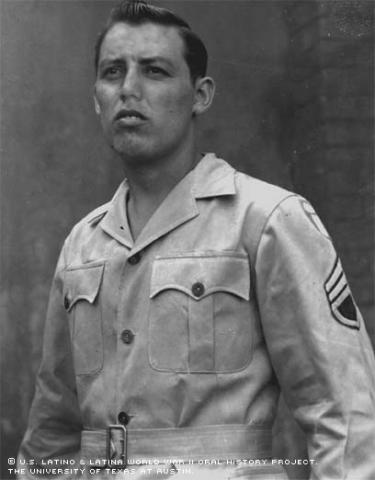 SAN MARCOS, Texas -- When Mike Aguirre graduated from Brackenridge High School in San Antonio in 1939, many opportunities and doors were closed to Mexican Americans.

Aguirre worked in a restaurant with his mother for a while and then in 1939 he joined the service.

"[At] that age you had no fear," he said. "You don't know what will happen tomorrow and you could care less sometimes."

Aguirre married a German woman in 1950, Ingeborg Analyssa Elbe, whom he met in Europe. The couple has two grown children. He credits his world travels during World War II and afterward with opening his mind to new ideas.

In the service, Aguirre worked in photography and repaired and installed cameras in aircrafts. He also worked in a photo lab and occasionally went up in the planes and took pictures himself. They mostly took ground pictures, photographing a bombsite before and after a bombing. Aguirre said they sometimes took a plane up and took aerial pictures. He and his men stayed together the whole time they were in the service during World War II. They were all very close. Skin color was not a factor, they were all different races, but they were all still equals... and friends.

He was stationed in several places: St. Louis, on the East Coast, Connecticut and to Washington and South Carolina. He later visited Burma, India, China, England, Germany and Switzerland.

In 1945 Aguirre, like most of the men, was ready to be discharged from the army. He went to Detroit and worked in the welding shop at the Chrysler automobile factory.

"Like kids now-a-days I...couldn't find myself," he said with a laugh.

Two years later, Aguirre found that he missed the service and in 1947, he joined the Merchant Marines because he wanted to "see more of the world." He traveled to England a number of times and went up and down the East Coast.

Outside the service, Aguirre recalls segregation and discrimination. Many of Aguirre's encounters with discrimination took place where he now lives in San Marcos, a 45-minute drive south of Austin.

Aguirre recalled when he was discharged from the Army and he traveled through San Marcos and many places would not serve Mexican Americans.

Aguirre retired from the Merchant Marines in 1963 and he and his family moved to San Marcos. He was attracted by the presence of Southwest Texas State University, a four-year state college that offered an opportunity for his growing children and by a Lutheran church that his family liked.

Soon after arriving, Aguirre applied for a job as a mail carrier. He passed his test, and went to introduce himself to the postmaster and told him he was ready to work. He did not get a job, but a few months later he noticed new Anglo carriers. He heard through the grapevine that the newest hires, all of whom were Anglos, were not as qualified as he was. He went to speak to U.S. Senator Ralph Yarborough's staff and told them he felt he had been discriminated against. A week or so, Aguirre was summoned to the postmaster's office for an interview: he got a job as a carrier, the first minority employee at the post office.

The day that he got his job at the post office, November 21, 1963, was also the day President John F. Kennedy was assassinated.

Aguirre was faced with a lot of challenges and would remind himself to remain calm and careful in his actions, as his good work ethics would set the example for all Mexican Americans.

"I always had to be careful because I knew that if I lost my temper and hit somebody that I would be thrown out," he said. "And I would be a good example for them not to hire anymore minorities, so I had to put up with a lot of grievances."

Eventually, it got so bad that Aguirre filed several company EEO complaints against the postmaster. Aguirre won back pay and sick leave because of the "stuff they pulled."

Aguirre was not the only one of this family to face discrimination. His family, especially his daughter, also faced racist attitudes. His German wife, who has a light skin complexion, was often asked, "How could you marry a Mexican?" His son also has a light complexion.

"[W]hen we first moved down here as long as he did not say his name is Aguirre, he got along fine," he said. "But as soon as we said Aguirre, that put a barrier there."

Aguirre's daughter, who now lives in California, was more his complexion, darker, and she always had difficulties with other people, even with girl scouts and other clubs.

"She will come to visit us, but as far as living down here I don't think she will never live in Texas, or in this part because she has gone through a lot especially in high school," he said.

Aguirre's religion has helped him through discrimination.

Aguirre said he feels sorry for people who discriminate and hopes that one day they will see the mistake that they are making.

Aguirre believes that when you travel or do a lot of reading it helps open your mind up to ideas.

"But when you don't, when you stay in one place for years and years . . .you get nailed down by this and not open minded," he says. "Of course now it is different now, getting better. But years ago, anytime you do traveling you meet people and you're open to ideas and other people."

Aguirre calls discrimination "one of the biggest difficulties in our country."

"[B]efore it was right in your face, but now they are more subtle about it."