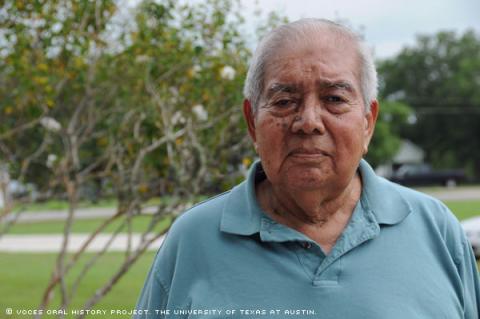 With the many hardships that their family faced throughout World War II, military veterans Mike Villa and his brothers, Raymond and Joe, were grateful that they all returned home safely to the United States.

Raymond Villa was the eldest brother and Joe was the youngest. Mike Villa was born on May 7, 1922, in Yorktown, Texas, about 70 miles southeast of San Antonio. When Mike Villa was eight years old, Simona Hernandez-Villa, passed away from an illness.

Their father, Antonio Villa, wanted a better family life for his sons, so he married Tomasa Sepeda three years later in hopes that she would guide the children and care for the family. The couple had 11 more children.

"We start having half-brothers, half -sisters, so we start growing into a family altogether," Mike Villa recalled. "We never did discriminate ... We started just living like a whole new family.

That advice came to have a special implication for Villa's oldest brother, Raymond. Their father had a stable job as a grave-digger, but it was not enough to maintain his 14 children. Mike Villa said that his big brother dropped out of school and enlisted in the Army in order to help out financially. But, while serving in the Philippines, Raymond Villa was captured and taken prisoner by the Japanese.

"My father took it pretty bad, knowing that my brother Raymond had been captured," Villa said. It was awhile before the family learned from the International Red Cross how the prisoner of war was treated.

In 1943, Mike Villa, then 21, was drafted into the Army. He recalled getting basic training in St. Petersburg, Fla., and some additional training in California.

Mike Villa was trained on many different aspects of communication in the military. He learned how to install telephone systems and how to operate a radio and a switchboard. He was assigned to the First Radio Squadron Mobile Army Post Office 710 as a cryptographic technician, a job that would require him to decipher and encode messages According to his discharge papers, his responsibilities also included preparing, compiling and revising code books, cipher systems and cipher keys to safeguard messages. He was stationed in the Philippines, serving on Leyte Island and in Luzon.

One day, when corresponding with his father, Villa learned that his older brother had been released from the Japanese prison camp, which was also in the Philippines. His father worked with the Red Cross to organize a reunion between his two sons.

Mike Villa was able to get four days off to spend time with his brother in Clark Field, near Manila, before Raymond Villa was due to be sent back to the United States. Mike Villa remembered when they bid each other farewell at the end of the visit.

"They loaded the trucks and [Raymond] bid me good-by and said, 'With God's help, we'll meet in our hometown," Mike Villa recalled. "And, sure enough, God helped us."

Mike Villa was honorably discharged at the rank of corporal from the Army on Feb. 5, 1946. He was awarded the American Theater Campaign Medal with a Philippines Liberation Ribbon; an Asiatic-Pacific Campaign Medal with two bronze stars; a Victory ribbon; a service stripe; two Overseas Service bars, and the Good Conduct Medal.

After he returned home, he found that there weren't enough jobs. So he used the G.I. Bill to go back to high school and get his diploma. Villa studied bookkeeping and junior accounting at Draughon Business College in San Antonio.

"Hispanics didn't get much of a chance," He recalled. "We had to struggle [to find] a good job."

However, the GI Bill would pay off eventually. Mike Villa landed a job as a typist, a skill he acquired in business school, doing civil service work for Kelly Air Force Base, on the southwestern edge of San Antonio.

He worked at Kelly Air Force Base for 34 years and served in the military for three years, totaling 37 years that he served this country.

Mr. Villa was interviewed by Samantha Salazar in Hallettsville, Texas, on July 20, 2010.