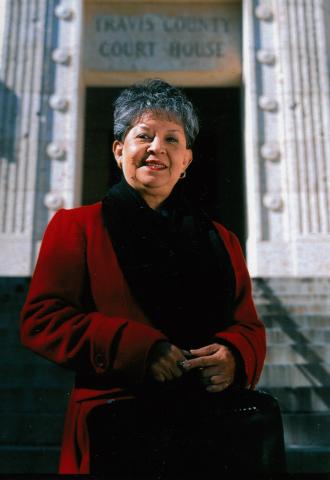 Margaret J. Gómez credits her early political awareness to her father. He was a Mexican immigrant with little education, but he closely followed political and world events.

Her father, whose parents were migrant farm workers, also supported the United Farm Workers in the 1960s. He was a regular at church jamaicas, or fairs, where candidates showed up to shake hands and work the crowds. He inspired his daughter, who got into politics herself and became one of the longest-serving elected officials in Travis County, Texas. Since 1995, Gómez has been one of the five elected commissioners who oversee county government in the area that includes Austin, the state capital.

“There was nothing too little for us to do,” she recalled of her first campaign for county commissioner in 1993. “We walked door to door. We made contact with people on a one-to-one, eyeball-to-eyeball basis. I still believe if you don’t walk, you run the risk of not winning. You cannot rely on just social media today, just as in the past you couldn't rely on TV advertising.”

Gómez was born on June 8, 1944, in Staples, Texas, a small town south of Austin. Her parents, Jose Dolores Juarez and Maria Guadalupe Juarez, had four children; Margaret was their only daughter. Both her parents were from Mexico, and both stressed the importance of education.

Her father and his 12 siblings all had to work in the fields to keep the family afloat, traveling as far away as Michigan to find employment. He loved school, but his family needed all their children’s help.

The family lived in Austin, and Gómez attended public schools, which had diverse student populations.

“I was limited in my English because we spoke Spanish at home, but there were Anglo kids in the neighborhood that I used to play with, so I picked up some English, certainly more than my friends who were Latino. … So I interpreted for some of my Latino friends” in first grade, Gómez said.

Her childhood ambition was to become a violinist in a symphony orchestra. For six years, she took lessons through an after-school program at the University of Texas at Austin. She later figured out that symphony musicians didn’t make much money, so she went to business school to learn typing and other skills. That helped her land a job in 1963 with the Texas Employment Commission.

Her first political involvement came in 1969, when she campaigned for Democrat Buddy Ruiz, who made an unsuccessful run for the Austin City Council, which had yet to have any Hispanic members. Gómez worked the streets in Hispanic neighborhoods, helping people to register to vote. Her father was not yet a citizen and could not vote. But he supported his daughter’s efforts: “Do whatever you can to make sure he gets into office; we need a voice,” he told her.

At the time, political power in the state Legislature, Travis County and Austin was controlled mostly by conservative, older white men. But Latino political power was emerging. In 1970, Democrat Richard Moya became the first Latino elected to the Travis County Commissioners Court, as the elected county government is called. Four years later, Gonzalo Barrientos would become the first Mexican American in the Texas House of Representatives. In 1975, John Trevino would become the first Hispanic City Council member in Austin.

In 1973, Gómez was hired as Moya’s aide. The job gave her insight about the workings of county government; working on his re-election campaign taught her about how to raise money.

She learned more by observing Democrat Ann Richards, who was elected county commissioner in 1976 -- the first step in Richards’ eventual rise to governor of Texas. Gómez paid close attention to how Richards worked with men. “She was real clear and direct,” Gómez said, and had a strong sense of humor – “a winning attribute in this business. It kind of takes the edge off things.”

She also was impressed by Richards’ organizational skills and “ability to make the decisions that were hard and still be able to walk away and smile.” If Richards was angry after losing on an issue, she didn’t show it.

In 1980, Gómez ran for constable, a county office equal to a peace officer. The 14-year incumbent, Herbert Benner, was retiring. “But when he heard I was running, he got back in and said, ‘This is no job for a woman,’” Gómez recalled. “That’s all he had to say to win the race for me. And I won 55 percent of the vote.”

She won easily and held the position until 1994, when she took on incumbent Marcus DeLeon to represent Precinct 4 on the Commissioners Court.

Gómez said she consulted with powerful Mexican-American politicians, including Barrientos, and got their blessing to run. She has held onto the seat ever since.

While serving her constituents, Gómez also has continued her education, earning a bachelor’s degree from St. Edward’s University in Austin in 1991 and a master’s degree in 2004. She is divorced with one daughter, Maria.

Gentrification has changed the face of the districts she represents; the Anglo population has grown. But Gómez has no plans to retire. “I’ve thought about running for something else, but I love what I do. I think I’ve found my niche, and I don't know how many people can say that,” she said. “I’m very happy doing what I’m doing,”

Commissioner Gómez was interviewed by Arnold Garcia on June 26, 2015 in Austin, Texas.