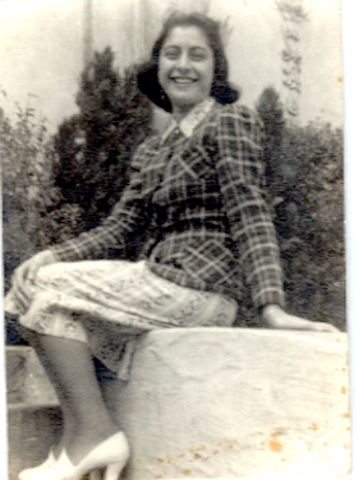 Seventy-seven-year-old María Elisa Reyes Rodriguez isn’t shy about opening her mouth when something's not right. As a Mexican American woman and former employee of the United States Civil Service, she has developed strong opinions about her country, discrimination and the relationship between the two.

"We're in America, and everybody has to be treated equally," Reyes Rodriguez said. "But if you don't have the guts to speak out for yourself, nobody's gonna do it for you."

Reyes Rodriguez, a Waco native, was 21 when she got her first government job in 1943 at Blackland Army Airfield, a temporary training ground in Waco for World War II twin-engine pilots. She’d been working days at a local department store and going to night school to learn shorthand, typing and other administrative skills so she could find secretarial work. Reyes Rodriguez said she’d always aspired to become a secretary, since she knew going to law school was impossible.

"Typing fascinated me," she said "You know, there weren't many secretaries back then."

Reyes Rodriguez was turned down in her first attempt to work as a stenographer, at a defense company in nearby McGregor, Texas. When she arrived in McGregor with a letter of recommendation, the facility's personnel director immediately told her the position, which had been advertised in the Waco paper for weeks, was no longer available.

"I'm just the type of person that I want an answer. I don't want them to beat around the bush. So I says, 'Sir, are you just denying me a position because of my nationality?' And he grinned and said, 'Yes, if I hire you, the other secretaries will quit. ... We just have white secretaries,'" recalled Reyes Rodriguez, hands locked in front of her, resting on the white lace cloth covering her dining room table.

"I'm sorry that God didn't make me white, but I'm proud of who I am," she told the man.

Reyes Rodriguez asked if she could speak to the president of the company, but was promptly told he wasn’t in.

"Your gonna hear from somebody. I'm not gonna keep quiet about this," said Reyes Rodriguez on her way out the door.

She was quick to fulfill her threat. On her way back home, she stopped by the office of Mr. Earl, a lawyer friend of her family and the author of her rejected letter of recommendation. He called the company in McGregor and was immediately put through to the president. Mr. Earl proceeded to tell the man that if what his friend had just told him was true, he would call Washington and have the company's defense contract broken with the government.

"He told him, 'send her over,' "Reyes Rodriguez recalled.

But she didn't go straight back to McGregor. She went back to her house for lunch instead. When she got to the front porch, she checked the mailbox, where there was a letter from Blackland Army Airfield in response to a secretary's job she’d applied for a few weeks before. She immediately made the 12-mile bus ride to the base, where she got the job and started the next day. She made about $2,000 a year, an average salary in those days, she said.

Reyes Rodriguez worked in Blackfield for the next two years and said she never encountered any discrimination. After the war ended in 1945, Blackland closed. In 1947, Reyes Rodriguez took a job at the VA Regional office and she said her experience there was also enjoyable. Within a year, she was promoted and transferred to the Virginia subregional office in Austin as secretary to the medical director in the out-patient clinic.

Being the only Latina at HQ 12th AF in Bergstrom Air Force base, she dealt with discrimination and prejudices routinely, she said.

Reyes Rodriguez believes discrimination is still as prevalent today as it was in 1945, when hundreds of Latinos returned to Texas after fighting for the U.S. in World War II.

"Some people don't believe what goes on," Reyes Rodriguez said. "Up ’til this day, it's still the same. You work. You're trying to get up in the world, but they [supervisors] bypass you."

Reyes Rodriguez was bypassed for promotions she had been promised when she worked in Bergstrum AFB in Austin. She was only paid to be a secretary, but took on the responsibility of an equal employment opportunity coordinator in exchange for a future promotion and more money. Rodriguez never moved up at Bergstrom because she took her added responsibility too seriously, she said.

"I think I made a lot of waves while I was at Bergstrom. I was their advocate," said Reyes Rodriguez of the minority veterans she served.

The personnel director cringed every time he saw her coming down the hallway to his office because of the confrontations they would sometimes have, she said. For example, when a group of minority veterans working at the base called Reyes Rodriguez and let her know they were about to get laid off, she took action.

"All I cared about were those Vets," she said. "They go to war, they fight for you and they get nothing but a reduction in force?"

There were several non-veteran Anglos at the base who weren’t in danger of losing their jobs, Reyes Rodriguez said, so she made the march over to the personnel director's office.

"Look, I think it's your duty to do something about this," saidReyes Rodriguez, in her encounter with her supervisor. "You better start checking around the base and seeing all those non-veterans that are holding jobs. They're the ones that should be laid off. If you don't do this, I'm gonna do something about it. ... I'm gonna go to the paper, the Green Berets, tell the whole world what you're doing to these Vets."

"I tell you. Those slips were taken back," she added, her eyes widening.

"I didn't get ahead very much, but at least I got it off my chest. I let them know," she said of her decision to speak out instead of keep quiet.

Despite her belief that minorities still suffer from discrimination, Reyes Rodriguez noted that they don't tolerate as much as they used to.

"A lot of poor people back then weren't educated. They were afraid of stuttering, getting laughed at. They couldn't express themselves clearly and they were timid. That's why I was glad (to do it)," she said, "Even if it was a hardship."

At the time of the interview, Reyes Rodriguez was living comfortably in a two-story pink-brick house with green shutters in South Austin. Big band music, to which she and her husband, WWII veteran Benito Rodriguez, enjoy listening, emanated from a black jam box, filling the photo-laden house with wartime tunes.

"Sometimes we'll get in the kitchen and dance to it." said Reyes Rodriguez, adding that ballroom dancing is a favorite pastime for her and Ben.

Back when Reyes Rodriguez worked at Blackland Airforce Base, she vowed never to get married until she earned enough money to buy her parents a new house. Within about two years, she had enough money to buy them a wood-framed four-bedroom house. The house, which her son Rudy now owns, cost $3,500 when she paid for it in 1945, she said.

Both of Reyes Rodriguez's parents were Mexican immigrants. Her father, who had a sixth-grade education and knew little English, worked odd jobs until he landed one with the Lone Star Gas Company in Waco, where he labored as a pipe fitter for more than 40 years, Rodriguez said. She was the second of nine children, all of whom started working at a young age.

"I had to work all my life," she said. "I was always the bread winner."

Her three brothers grew up shining shoes and delivering the newspaper, she recalled. Reyes Rodriguez, an honors student, got her first job at school, helping a teacher grade class work. At the same time, she worked as a maid for a local Anglo woman in exchange for free piano lessons from her boss' daughter.

Reyes Rodriguez used to play the piano frequently at St. Francis, her family's church. Later on, she often played for veterans at the Veterans Administration Recreation Center. There ware so many shell-shocked soldiers returned from the war, that the VA had to open another building in Waco to handle all of them, she said.

"A lot of the ones that were really, really bad had to be locked up," she recalled.

Reyes Rodriguez spent a lot of her time taking flowers to the wounded, often-downtrodden men at the facility's hospital, as well as organizing entertaining events for them.

"I found it very rewarding to do something for the boys. It's the least we could do," she said.

Mrs. Reyes Rodriguez was interviewed in Austin Texas, on May 10, 1999, by Ryan Bauer.