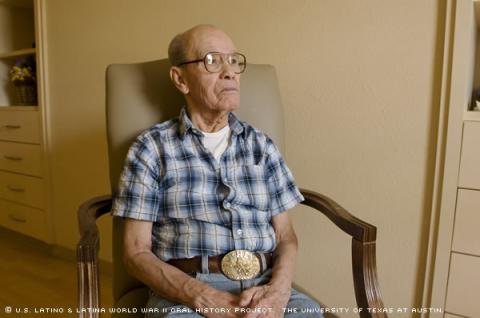 Manuel Calderon’s crossed arms seemed to reflect his mood when asked if he was drafted into World War II.

“Of course,” replied Calderon, who served in the Army for four years.

Not happy about his afternoon routine at Ambrosio Guillen Texas State Veterans Home in El Paso, Texas, having been interrupted, he was reserved and answered reluctantly. For example, when asked if he was surprised when drafted in October of 1941, he said, “Never thought about it.”

So he was surprised?

He was sitting in a chair in the salon/barber shop at the home, where he had been living for several years.

“I don’t even remember,” he whispered when asked how long he had been at Ambrosio Guillen.

At first, he pretty much declined to talk about his war years, but then decided to share a little bit. He said he went through basic training at Fort Bliss in El Paso, received more training in San Diego, and then was shipped off to Alaska for four years. After that, he trained some more at Fort Bliss, then was sent over to Germany, or, as he put it, “to the end of the world.”

Calderon was in the artillery, but clearly didn’t want to elaborate on the experience.

Did he see a lot of combat?

Was he ever wounded?

He sighed and looked like he was close to crying.

“Many of them killed, all around us,” he said, adding, “I hope I can be able to sleep tonight.”

And what did he believe was the hardest aspect of being in the war?

“What do you think – facing bullets and all that stuff,” he said.

Minutes later, he let slip that he is a “life member” of the Disabled American Veterans organization.

How did he become a member?

When asked if he got hurt in the war, he closed his eyes, bowed his head and softly sighed.

“I’m just here waiting for the day to come. That’s it,” he said a little later, adding that he would turn 89 the following February.

When showing off a large framed photo of his WWII unit in his room, however, he appeared to be in a considerably better mood. And when he mentioned for a second time that he would be 89 in less than a year, he even smiled, sitting up straight and proud on his bed behind the black and white image in his lap.

Calderon was discharged from the Army in October of 1945 at the rank of Private 1st Class. He earned Asian-Pacific Theater and European-African-Middle Eastern Theater medals, as well as a Good Conduct Medal.

When he got back to the States, he enrolled in nursing classes at Hotel Dieu, a Catholic-run teaching hospital in El Paso that closed in 1988, and then got a job as a nursing assistant at a local veterans hospital, where he stayed until it closed in 1964.

After that, he spent a number of years in Dallas, working in nursing homes and hospitals, but eventually returned to El Paso. He didn’t grow up there, but his hometown of Sherman, N.M., isn’t terribly far away.

His parents were poor farmers, so Calderon and his four siblings would help them with planting, plowing and other tasks after school and on weekends.

Calderon went to school through the sixth grade. He stopped going around the time his mother died.

“Believe it or not, my oldest brother is still driving around town. He’s coming to see me pretty soon,” said Calderon, a lifelong bachelor.

He guessed most of his childhood friends got drafted into the war like him, and said he did not know what became of them.

“I always got along with people all the time, everywhere. I think that’s why I’m here,” Calderon said.