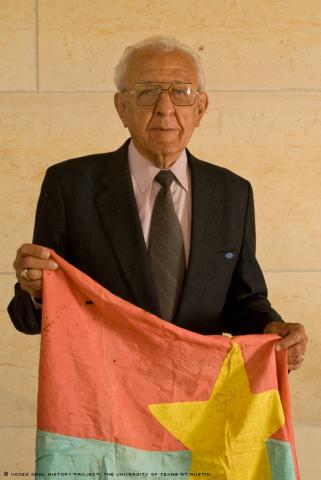 "When you get ambushed, you're supposed to get killed."

That's what the Army tells every soldier during training, Luis Landin said.

"But for me," he added, "my life consisted of events that weren't normal, so I knew what I had to do when the chips were down."

One of six brothers and a sister, Landin grew up during the 1940s in Laredo, Texas, 218 miles southwest of Austin. He said it was tough growing up in a poor family. Two of his brothers dropped out of school to support the family before he did, and the three of them eventually enlisted in the Army.

Landin dropped out of high school after ninth grade, and held several jobs to help his family.

"I used to shine shoes and sell newspapers, but I never felt comfortable doing those jobs," Landin said. "It wasn't for me, so I joined the Army."

His two brothers were already stationed in the Korean Peninsula when he volunteered for the Army in 1948. During that postwar year, the peninsula was divided in North and South Korea, and Germany was divided into four zones, one of which was controlled by U.S. forces. Landin was sent to Fort Chaffee, Ark., for training. After training, the military sent Landin to Europe, and, by 1950, he was in South Korea with the 45th Infantry Division.

Landin started his Korean tour as a corporal.

"As soon as I got there, my squad leader was killed, so I was promoted to sergeant," Landin said.

Landin said once he joined the Army, he never really could go back to his old civilian life. He did, however, earn a high school equivalency diploma in 1956, while still in the Army.

"I knew that if I wanted to stay in the service, I had to graduate high school, or at least the equivalent," Landin said. "My two other brothers who were in the Army went back to school after their tours, so I wanted to at least do something like that since I only had a ninth-grade education."

After his tour in South Korea, Landin went back to Fort Dix, N.J. But he said that he quickly grew restless in a controlled, peaceful environment. So, in 1960, he responded to an Army call for volunteers with combat experience to be advisors in the Republic of Vietnam.

During his first two years in South Vietnam, the Army as a whole wasn't prepared for that type of conflict, Landin said.

"We originally only had 9-mm pistol[s] and old M1 rifles," Landin said. "I wasn't really comfortable with that situation."

After his initial tour in South Vietnam, Landin returned to the U.S., and in 1962 he was stationed at Fort Hood, Texas. Once again, he said he grew tired of life back in the states, so he became the Light Weapons Infantry advisor to the 1st Battalion, 33rd Regiment of the 21st Infantry Division, Army of the Republic of Vietnam.

On Dec. 28, 1964, Landin's regiment was ambushed. He said his division was broken into three groups, with his lead platoon in the middle. At sunset, a large Viet Cong force attacked all three units with mortar and machinegun fire. In the initial attack, Landin's company commander was shot in the chest.

"Everyone had hit the ground soon after the ambush had started," Landin said. "I felt that the only way we were going to get out of this situation was if I rallied the troops and pushed back."

Exposing himself to enemy fire, Landin recalled locating a radio and calling in for air support to combat the Viet Cong force and extract them from the area. Once the armed aircraft arrived, Landin pointed out possible positions of machinegun and mortar nests.

"I was lucky that the soldiers listened to me, based on the situation we were in," Landin said. "We had to respond, no matter how bad it got."

During this surge, Landin organized teams to take the wounded to a medical evacuation aircraft about 800 meters, or about half a mile away.

"It was tough because we were under sniper fire as we evacuated the wounded from the battlefield," Landin said. "When this happens, you just react to survive."

According to Landin, the ambush lasted until 4 a.m., when the main Viet Cong force was finally eliminated and those who remained fled. Overall, 27 were killed in the attack.

Landin was promoted and awarded the Silver Star on April 22, 1965, for his gallantry in action. Although he disliked recalling the events, he did keep a souvenir from the battle: After the attack was over, Landin said he found one of the machinegun emplacements and took a Viet Cong flag from the area. The flag still bloodstains from the Viet Cong forces, as well as bullet holes.

"I kept it as a reminder of what we went through and the men we lost," Landin said.