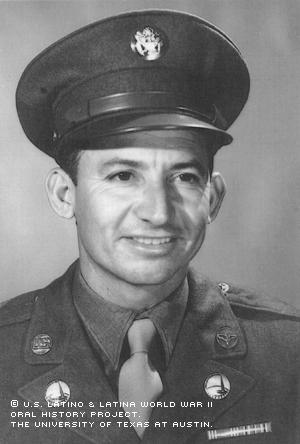 For one thing, Raúl, José and Alejandro would eventually each have a son who served in the military: Raúl’s oldest son, Raúl Barrera, Jr., died Nov. 24, 1969, in Binh Hoa, South Vietnam, at the age of 22. José’s youngest son, Arthur Curtis Falcon, recently returned from Iraq, having served with the 4th Infantry Division, which was involved in the capture of Saddam Hussein. And Alejandro's son, Alex, served his country as a member of the Marine Corps. He was a pilot from 1971 through 1976 and later served in the Marine Forces Reserve from 1987 to 2002, when he retired as a lieutenant colonel.

For another thing, the Falcons are the descendants of Spanish Captain Blas de María de la Garza Falcón, one of the forefathers of Nueces County, where Corpus Christi is located. De la Garza Falcón was the son of General Blas de la Garza Falcón, who served as governor of Coahuila, Mexico. Historical accounts say the family helped colonize the Mexican states of Nuevo Leon, Coahuila and Tamaulipas, as well as parts of Texas.

Raúl, Lorenzo, José and Alejandro are the sons of Pedro Falcon and Francisca Barrera Falcon. They grew up with their three sisters; Amelia, Adelfa and Emma, who also has sons who served in the military; on the Blue Ribbon Ranch in Palito Blanco, a small Texas community about 10 miles south of Alice.

Pedro labored on the ranch to earn money to provide for his family, working without machinery, using only picks, shovels and axes. He and Francisca sacrificed for their children, and when the time came, they sacrificed their children for their country.

Raúl was the oldest and the first to enlist. Even before the war started, he volunteered for the Army's Mechanized Cavalry unit and was stationed at Fort McIntosh in Laredo, Texas. Later, he was transferred to Ft. Bliss in El Paso, where he became a military policeman.

One day in 1940, while Raúl was on training maneuvers in New Mexico, Pedro died of leukemia. Raúl went home to attend the funeral.

Alejandro, the fourth oldest, was in the Civilian Conservation Corps in Tucson, Ariz., at the time. He also attended the funeral, but wasn’t granted leave. Instead, he went AWOL.

Raúl later escorted his younger brother back to the CCC to speak for him, and was successful in persuading superiors to allow Alejandro back in without punishment.

After the Japanese attacked Pearl Harbor, Raúl, who’d later serve as a technical sergeant in the Pacific, found himself in Hawaii, where he met up with his brother, José, who was in the Navy. Raúl later told family members he never felt more proud than when he walked through downtown Honolulu and soldiers shouted out to his brother, "Hi, Doctor F!"

José got the nickname as a result of Pearl Harbor, where he was a Pharmacist Mate First Class with the Navy. He applied for submarine duty and left by ship en route to San Diego, Calif. According to his sister, Emma Falcon Tamez, his successful trip across the Pacific began Dec. 6, 1941, the day before the Japanese bombed Pearl Harbor.

Somehow, however, people initially thought José had been killed. Emma, who has been interviewed by the U.S. Latino and Latina WWII Oral History Project, knows this for a fact because she was at a wedding when someone announced José had died at Pearl Harbor. Fortunately, José’s friends and family learned several days later that he was alive, and it was another young man from their community, Rodolfo Garcia, who’d been killed.

Pearl Harbor had simply changed José’s itinerary. On the way to San Diego, his boat was met by several medical shipments headed from the mainland, and anyone with medical training on the ships was requested to go back to Pearl Harbor. Though his medical training was minimal, José went back and took a job giving inoculations.

Lorenzo, the second of the four brothers, and the only one of them interviewed for this story, was assigned to the Air Transport Command at Gander Field in Newfoundland, with a group known as the "Railroad of the Sky." The command delivered critical supplies to combat zones.

Lorenzo was trained as an airplane mechanic but also assisted search and rescue missions. He helped when planes had to land without the benefit of lights, often crash-landing in darkness.

"There never was anyone to rescue. When a plane went down, there were never any survivors," Lorenzo said. "When we did find bodies, we used mattress covers as body bags."

The quick delivery of cargo gave the Allies a strategic advantage: The ATC started in 1942 with 11,000 officers and enlisted men. By the war's end, more than 200,000 were in the Command. Many believe the war would have been lost without it.

Lorenzo recalls how some Latino military personnel let their loved ones know where they were stationed. For example, someone in Alaska might write home, "No mando retratos porque a las camaras les falta film," which translates to "I'm not sending photos because the camera lacks film." Imbedded in the sentence in Spanish are the words "A Las Ca..." for Alaska.

Lorenzo, Raúl, Alejandro and José were among the many Hispanics who left behind their families to serve in the military. The effects of war were reportedly noticeable to the Falcon sisters. For example, in a note sent to the Project, Raul Tamez wrote that his aunt, Adelfa, remembered a shortage of nylon for the amount of parachutes that had to be manufactured during WWII. She recalled some ladies drawing a line down the back of their legs to simulate hosiery.

Emma, Raul’s mother, remembers how difficult it was to be left behind on the home front and cut off from her brothers.

“We couldn’t” communicate with them. “They couldn’t say anything about what was happening,” recalled Emma, face strained in a way that makes it look like she’s still worrying.

After the war, José graduated from Baylor University. The scarcity of jobs in Texas led him to Chicago with his mother and sister, Amelia. He taught in the Chicago Public Schools until retiring, and died in 2000 after bouts with throat cancer and Parkinson's disease. Lorenzo says the family wondered if José’s service affected his health.

"I could never understand why he got cancer of the throat if he never smoked," Lorenzo said.

Alejandro was the only one of the Falcon brothers to serve in Europe. He was a jeep driver for the 84th Infantry Division, a unit that dates back to the days of Abraham Lincoln. Known as the Railsplitters, the division heavily recruited Latinos from across the Southwest. The men of the 84th landed in France on Nov. 10, 1944, and rushed to the front line in Belgium. They were the first unit to attack the Siegfreid line, where Germany placed its defensive fortifications.

Then, Germany mounted its last counter offensive, the Battle of the Bulge. Some 75,000 Allied-force members died in this fight, under miserable snowy conditions.

Once home, Alejandro seldom spoke about the war and took to drinking a lot, Lorenzo says. But he did tell of an occasion when a captain ordered him to drive alone into a battle zone to warn of enemy sightings. After completing the task, he took the captain aside and told him he didn’t appreciate the condescending manner in which the order was issued.

In 1945, an article in the Corpus Christi Caller Times paid tribute to Francisca Falcon and her four sons. The story said Alejandro's unit "accomplished the impossible" in repelling the Germans. Alejandro died in 1990 and was buried in a veterans cemetery near the Milwaukee, Wis., headquarters of the 84th Infantry.