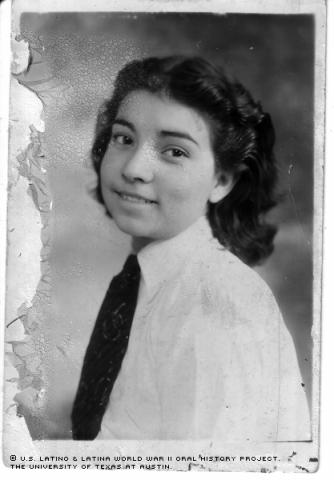 Lina Cordova prayed each night for her husband's safe return to her and their two children during World War II.

"I used to pray every night, every night I would pray, 'Please God, bring him home,'” Cordova said. "I didn't care how he [came] home – without an arm or without a leg – as long as he came home to me and the kids.''

While Alfredo Cordova was away fighting on Europe’s battlefields, Cordova wrote him two or three times a week. When he wrote back, the letters were sometimes censored, some passages blacked out, she says.

Cordova also sent Alfredo packages with cans of Vienna sausages and cookies. To make the cookies, she cut back on the rationed sugar used in other foods and saved up for her baking. Other items she recalls being rationed included gasoline and nylon stockings. The stockings were 75 cents per pair, and each woman was allowed only two pairs – if they were available, that is.

"The lines were almost a block long of people trying to get into Montgomery-Ward to buy nylons," she said.

Cordova was born in 1921 in Pena Blanca, N. M., a small town about an hour's drive from Albuquerque. She was the eighth of 15 children her mother gave birth to, but one of only five who lived past the age of 4. Cordova's father, Jacobo Martinez, was a sheep herder and worked as a coal miner during the Great Depression. He also farmed wheat, which he took to grind at a mill north of town.

"I used to love seeing the big piles of wheat," Cordova said. "I used to say, 'It looks like gold.'"

Life was tough in the Southwest in those days. Cordova recalls that before World War I, her father was tending sheep in the Magdalena Mountains. One night, bandits came in a truck and blindfolded him before making off with all of his lambs.

"They took him to Magdalena 20 miles away and dropped him off. That meant he had to walk to his home in Socorro 30 miles away. While going there, his feet suffered frostbite. He then had to walk to Albuquerque [another 75 miles] to get medical care.

"They had to amputate the toes from both feet, and for that reason he did not go to service in World War I," she explained.

When Cordova’s father died in 1936, her mother, Fulgenica Sanchez Martinez, had to support their family, so she worked in a sewing factory, which they used to call "The Sewing Project." To help the family, one of Cordova’s brothers taught school during the winter and attended a local university during the summer.

Cordova attended a public school taught by Catholic nuns because there was a shortage of teachers.

"I didn't know a word of English when I went to school," she said. "With the sisters, you had to learn or else. They were very strict."

In the summer of 1938, when Cordova was 15, she met her future husband. Alfredo was popular because he was the only young person with a car. One summer day, as she was walking with her cousin, they heard an automobile coming up the road.

"Just as we got to a big cottonwood tree by the road, the car pulled up," Cordova said.

She met Alfredo that day, but didn’t see him again until fall, when school resumed. They didn’t date until she was 16, and they were married in May of 1940, toward the end of her senior year.

The couple moved to Albuquerque to live with Alfredo's parents while he searched for a job. He found work at a restaurant, serving ice cream and milkshakes for 15 cents an hour.

"It was hard days for us," she said. "It was the end of the Depression, but it was still hard."

The Cordovas’ first child was stillborn, but in 1941 Cordova gave birth to a baby girl, Naida. In 1942, she had a son, Alfredo Jr. Instead of going to a doctor for the deliveries, she went to a midwife, who charged $25 for a male and $20 for a female.

Cordova laughs when recalling midwives charged more for a male than a female, saying she didn't know why there was a price difference.

In 1943, the Cordovas went to San Diego, Calif., to find work because Alfredo heard jobs were available there. He was successful in finding employment and they bought two acres of land, on which they’d planned to build a house. But just as their new life began, Alfredo was drafted into the Army. The family decided to move back to Albuquerque before he reported for duty. Alfredo paid $150 for a Plymouth, and the same day they began a three-day journey back to Albuquerque.

After Alfredo left for the war – he faced combat in France, Germany and Austria – Cordova and her two children lived with his parents. Her in-laws insisted on taking the tires of the car off, because they didn’t believe women should drive. Needless to say, Cordova has seen the roles of women change drastically.

"When I was young, every decision was made by my husband," she said.

Today, Cordova has an equal voice.

"I guess he figured sometimes my ideas were better than his,'' she said, "so we'd work it out."

Cordova recalls sitting on the front porch writing letters to Alfredo while he was away, and that she sometimes saw the faint glow of tiny bicycle headlights approaching. She knew bicycles delivered telegrams with bad news about wounded or dead soldiers, so she’d pray no one was bringing her tragic news about Alfredo.

"One night they gave me a scare. [The messenger] was looking for an address. My heart sank. Luckily, it was not for me," she said.

Cordova scoured local papers, which ran the names of men returning from the war. One day she found Alfredo’s name on a list – two years after his departure.

"Oh, we were so happy he was coming home," she said.

After he returned, the Cordovas had a third child, a daughter named Dorothy.

"God was good to me," Cordova said.

Mrs. Cordova was interviewed at the Albuquerque Veterans Center on Nov. 2, 2002, by Maggie Rivas-Rodriguez.