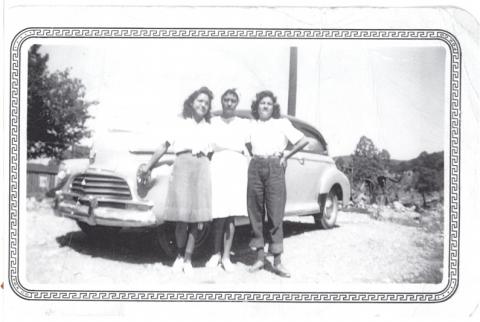 “God gave me my mom and my dad and their Spanish. It is so beautiful to talk real Spanish,” Sierra said. “And I give thanks to God that my children know both languages.”

Growing up in the New Mexican mining town of Fierro, in the southwest corner of the state, being the child of immigrants wasn’t always easy: discrimination and poverty were prevalent.

Sierra remembers walking half a mile to school in leather “shoes” with thin soles and only strips to cover the top of her feet.

She learned to speak English in elementary school, where she says she was punished for speaking Spanish. She and her brother were often forced to stay at school long after the final bell, writing on paper in pencil 100 times, “I will not speak Spanish,” she recalls.

Sierra remembers glimmers of tolerance, however, including some schoolchildren’s interest in Mexican culture, of which she was proud.

“There were twins, Gerald and Geraldine, who would stay after school with us because they wanted to learn Spanish,” she recalled. “They also loved our burritos, and we used to exchange them for peanut butter and jelly.”

After completing eighth grade, Sierra began helping her mother at home, learning how to make galletas (cookies) and washing the family’s clothes in a nearby creek.

While Sierra and her younger siblings attended school and worked at home, nearly every male member of her family was employed at mines in Fierro and neighboring towns.

With work in the mines came inherent danger. Sierra lost two brothers, Lorenzo and Melquiadez Moreno, in a mine blast in 1947. Despite this, her father, Julian Garcia Moreno, was always dedicated to the risky work, which allowed him to provide a decent life for his family.

Sierra’s father, whom she described as “jolly,” was protective of all his children, but especially his girls. He hoped his daughters wouldn’t have to enter the workforce, but as World War II loomed, she went to work at a nearby gas station in Hanover, filling miners’ tanks before they traveled to work in neighboring towns. Friends and family would swing by to gas up, she recalls.

Many soldiers returned to deteriorating conditions in Fierro after the war, Sierra says: The mines wanted to withhold some of their health and insurance benefits, and working underground could be treacherous.

She remembers traveling to a nearby town to join a picket line of women who were supporting a strike for better working conditions at Empire Zinc. The strike eventually became the basis of 1954 film Salt of the Earth.

“My mother said, ‘Let’s go and help.’ The picket was like a big gathering, there were a lot of girls,” Sierra recalled. “When they tried to get us to leave, the cops were there and they threw tear gas.”

Sierra recalls her childhood home being full of music from the band of her uncle – whose day job was mining – while the scent of her mother’s tortillas wafted through the house. Some of her happiest memories of Fierro are from parties and dances at local halls.

“I met my husband at a dance. He did not go to the war because he was blind in one eye. But at one time, he left to work in a mine in California,” Sierra said. “I told him, ‘If you go to California, I will keep dancing.’ He went, but came back and we were married.”

Jose Bolanco Sierra passed away in 1997, after he and Juana celebrated 44 years of marriage. The Sierras have two sons, one of whom joined the Marine Corps, something that was difficult for Sierra.

“I cried, but it is their choice. My son wanted to go places, [but] he did not fight in a war,” she said.

Sierra says she sees some discrimination today, but there is more acceptance and integration than in the past.

“Now everything is mixed,” she added.

However, Latinos still do much of the manual labor, she notes, using tomato fields as an example.

“Anglos won’t go to the fields,” she said.

Sierra feels fortunate to enjoy modern-day conveniences – especially her electric stove, since her mother used to cook on a wood-burning one. Her children are able to own what would have been considered luxuries in her youth, she says.

"Sometimes they do go overboard,’’ Sierra said of her children’s purchases. “You have to save."

Mrs. Sierra was interviewed in Hanover, New Mexico, on July 15, 2004, by Brenda Sendejo.