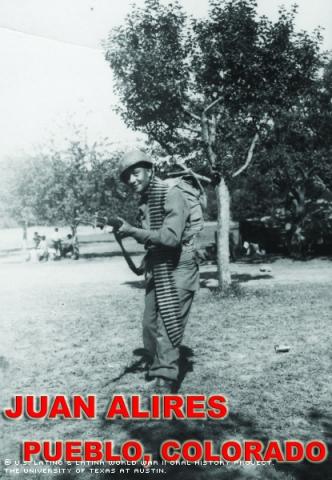 Juan Ramon Alires was already the father of two children, with another baby on the way, when he went to war as part of the 11th Armored Division.

Alires was drafted into the Army and assigned to the 11th Armored Division, known as the Thunderbolt Division, in 1944 at the age of 25. He was the second in his family to serve in WWII; Maximinio, his older brother, served four years.

When he left for boot camp at Fort Logan, Colo., his wife, Marinita Trinidad Santisteran Alires, was five months pregnant and taking care of the couple's two toddlers. She stayed with Alires’ family after he left for the war.

In boot camp, Alires specialized as a M1 rifleman. A year later, he and his unit were fighting in the European Theater. Walking slowly and carefully, keeping an eye out for danger, Alires was ready for the worst to happen.

And it did. A German soldier threw a grenade that exploded near Alires' right hand and shoulder. His injury kept him in a military tent hospital for a month.

Afterward, while getting ready to go to the Pacific Theater, the atomic bombs were dropped on Japan, and the Japanese soon surrendered. Alires was discharged from the 11th Armored Infantry on Nov. 28, 1945. He earned multiple awards for his service, including the Purple Heart, the WWII Victory Medal, the European-African-Middle Eastern Campaign Medal, the Good Conduct Medal and the Combat Infantryman Badge.

The youngest of five, Alires was born May 27, 1919, in San Cristobal, N.M., 150 miles north of Albuquerque. Young Alires helped out as much as he could while his father and brothers worked at the family sawmill in La Lama, N.M. He attended elementary school in San Cristobal, and after the sixth grade, his family moved 35 miles north to a predominately Mormon, southern-Colorado farm town called East Dale, which didn’t have electricity and other modern conveniences.

Alires recalls his father and brothers cutting down timber from nearby mountains and building makeshift telephone poles, then connecting wires to the poles from the nearest electrical source, which was 20 miles away. Monday through Friday, Alires and his siblings would walk three miles to Jaroso Middle School, rain, shine or snow.

"There was enough snow to throw up in the air, but I guess the cold doesn't do anything to you when you are young," Alires said.

Soon, he didn't have to walk anymore. Seventh grade was his last year in school because he had to help his family with the farm. Everybody worked together growing crops, including cauliflower and potatoes, as well as raising pigs, sheep and goats.

When Alires got older, he began going to dances in nearby towns for entertainment. He met Marinita at a dance in Costilla, N.M.; for Alires, it was love at first sight. They married two years later, on Nov. 23, 1940.

He was drafted into the Army in 1942, but managed to defer service for a few years, as he and Marinita had two toddlers to look after.

After his Army discharge, Alires joined his family on a farm in San Luis, Colo. He helped work the farm, as well as attended a government Civilian Conservation Camp school. A year after his return, he and Marinita had a fourth child, Maria Barbara, born August 25, 1946.

In 1950, the Alires clan moved to Pueblo, Colo., where Alires and Marinita had their last child, Ricardo Benildo, and Alires took a job as a laborer with Colorado Fuel and Iron Co., Pueblo Ordnance Depot. He worked there for 22 years before retiring.

A Christian, Alires believes all Americans should thank God for their lives and freedoms.

"That is very important, especially for the younger generation," he said. "They should respect and obey all Ten Commandments."

Mr. Alires was interviewed in Pueblo, Colorado, on October 11, 2003, by Irene Consuelo Chavez.