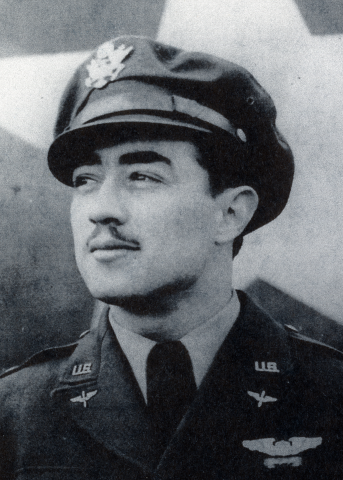 When the Japanese bombed Pearl Harbor on Dec. 7, 1941, Juan Provencio knew what he had to do. As the war overseas had worsened, his father, Manuel, an immigrant from Mexico, had told his sons: "All of you men must be ready to go and help your country. You were born here, and you have been given many privileges that many don’t get. It is up to you now."

Provencio had been taking classes at the Texas College of Mines in El Paso, where the family lived. He interrupted his studies to join the war effort and was inducted into the Army Air Corps, predecessor to the Air Force, on March 3, 1942. Later that year, he flew his first airplane, the beginning of a military career that would span three wars and duty on three continents.

Provencio flew 25 combat missions during World War II and served his country again during the Korean and Vietnam wars. He retired as a lieutenant colonel in the Air Force in 1972.

He was born on May 28, 1920, in El Paso. His parents had left Mexico during that country’s revolution, crossing the border from Juárez in 1913. Both would later become U.S. citizens. The family would grow to 10 children – six boys and four girls.

In 1942, as a new air cadet, Provencio was sent to the Air College in Oklahoma City. He recalled his first flying experience, in a two-seater PT-19A Fairchild single-engine plane.

“I’ll never forget that day because it was a windy day, and my instructor wanted to make sure that I would fly, that I wasn’t scared, that I wouldn’t get sick, and so he gave me the works."

The two-seater plane had an open cockpit, and the instructor asked Provencio if he’d like to see what a loop felt like. “OK, let’s try it,” Provencio said. “It was great.”

After a rocky start, Provencio began to show an aptitude for flying and learned to fly a growing number of planes. He was training on B-17 bombers in Pyote, Texas, when he was assigned to serve as a co-pilot in England. By late summer of 1943, he was at the Great Ashfield Air Base, about 50 miles north of London. His first mission was just weeks away.

The target was a Messerschmitt airplane manufacturing plant in Bordeaux, France. Provencio’s plane was assigned the lowest altitude in the formation as it flew toward the target. But heavy clouds made it impossible to drop the bomb load, so the crew turned around. They heard a radio operator say that those British Mosquito fighters were coming to escort them back to England.

But the approaching planes were Germans – and they were firing at Provencio's plane. The tail gunner called the pilot: A German plane was behind them and getting ready to ram them.

“When he said he was going to ram us, I knew God was taking me right then," Provencio said. “And I had about 20 thoughts in about three, four seconds. You can’t imagine how fast you can think when you’re scared.”

He turned to look at his pilot and saw the enemy plane right next to them; the German pilot apparently had been hit, and the plane fell into the water below.

“Before, I used to think, you know, it’d be hell to see somebody die, even if he’s a German, even if he’s the enemy. But I was so happy, it wasn’t even funny. I felt as if I was being mean; I was being evil by being happy that the guy had died, but we were alive.”

The mission had lasted 12 hours.

Over the next year, Provencio was co-pilot or pilot in some of the most important bombing raids of the war in Europe. They included a mission to Schweinfurt, Germany, where the bombs damaged but did not destroy the ball-bearing plants, and the U.S. lost 60 planes out of about 375 – the biggest American losses up to that point.

He also participated in missions to hit a German-controlled plant in Norway that was making heavy-water, which could be used to make nuclear weapons. During a long-distance raid in East Prussia, many planes ran out of gas and had to ditch – but not his.

“During my missions, flying over Germany, I want to say that I’m glad I was there when I was. Everything went good,” Provencio said. “The Schweinfurt mission, where we lost 65 B-17s, the heavy-water plant raid to Norway, which I believe might have been the factor that won our war, the Marienburg raid, far away in East Prussia, which showed that we could attack anywhere in Europe, the first heavy bomb raids over Berlin ... I think I was on some of the toughest missions presented over there.”

Enemy fighters were not the only dangers. For high-altitude flights, crewmen wore heavy clothes and used heating devices to keep their feet and legs warm in temperatures that could drop to 40 below zero or lower. On one high-altitude flight, that system failed, and Provencio lost feeling in his toes, then his ankles, then his lower legs. His plane got permission to return to England. Doctors decided to let his legs warm up on their own, but Provencio said it took several days to recover. Walking felt like “walking on glass,” he said.

After Provencio’s 25th mission, he became a top aide to Gen. Curtis LeMay and then his successor, Gen. Earle Partridge. Then he was back home. His first mission: going to see Maria Luisa Samaniego, a clerk at the main PX in Fort Bliss, to whom he had been writing while he was in Europe. They married on base June 4, 1945, and began a family.

In December 1947, Provencio returned to El Paso as a civilian but signed up for the Air Force Active Reserves. He was activated in 1951, during the Korean War, and worked as a B-17 instructor, co-pilot for various planes and PX officer, among other jobs, with assignments that took him to states including Texas, Mississippi, Georgia, Alaska, Missouri and Alabama. He put in flying hours all the while, and upon graduation he was selected for a Regular Commission in the Air Force.

He later was stationed in Panama, an assignment that also took him to most of the countries in South America. His family was able to join him there. In 1968, he got orders to go to Vietnam, where he served at Tuy Hoa and Pleiku.

On return to the U.S., he was stationed at Cannon and Holloman Air Force bases in New Mexico, both of them close enough that he could regularly visit his family in El Paso, where he had bought a house.

When he retired in 1972, he had been awarded the Distinguished Flying Cross, the Bronze Star, four Air Medals, the Meritorious Service Medal and three Commendation medals. He had put in 5,000 hours flying 26 different aircraft.