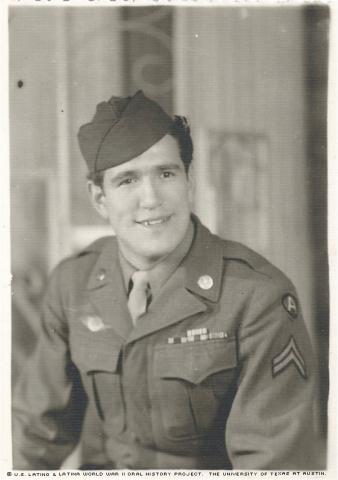 Juan Martinez, Jr. is the embodiment of the patriotism Mexican Americans demonstrated during his time in the Army.

Born Nov. 20, 1922, in El Paso, Texas, to Juan Martinez, Sr. and Sebastiana Valdez Martinez, he grew up speaking both Spanish and English. Though both of his parents were from Mexico, he identifies himself as “American,” not “Mexican-American.”

Martinez was the third of five children and the only boy. The entire clan practiced Catholicism and attended church at least once a week at St. Ignatius Catholic Church in El Paso.

“I was brought up Catholic,” he said. “I don’t practice it, but I still consider myself Catholic.”

Martinez says he was taught the value of hard work at a young age while working during high school at his father and uncle’s pharmacy and drug stores, Farmacia Cruz Blanca and Botica Mexicana Guerrero. His father’s business struggled, yet he “had enough [money] to keep his family going at the time,” Martinez said.

The family was “dirt poor, but we never missed a meal.”

Martinez says he was interested in basketball and football in high school, but was discouraged by his father, who insisted he work at the pharmacy in his spare time. Juan Sr. often worried Anglos were going to send the family “back to Mexico,” Martinez says.

His father’s fear never materialized, however, and Martinez graduated from Bowie High School in 1941, where he served on the school Senate as President Pro-tem his senior year.

Throughout high school, he was often encouraged by his father to learn “blue-collar” skills, like car and air-conditioning repair, so when the war began, Martinez aspired to be a machinist. During wartime, he worked as a laborer in a lumberyard for the Southern Pacific Railroad.

He was soon drafted, however, and on Jan. 14, 1943, he was inducted into the Army. For nearly three years, he was assigned to Battery A of the 468th Antiaircraft Artillery Automatic Weapon Battalion, fighting at the Battle of the Bulge and elsewhere in Europe.

“It was bitterly cold,” he wrote of the Battle of the Bulge after his interview. “[And] the battle was concentrated. The Germans were good soldiers.”

Keeping in mind the encouragement his superior officers had given him about getting an education, he took advantage of the GI Bill and enrolled at Texas College of Mines and Metallurgy, now known as The University of Texas at El Paso.

‘“[You could] probably get through college,”’ Martinez recalls his superior officers telling him. ‘“You may not even finish it, but give it a try.”’

Although the elder Martinez disapproved of his son’s advanced studies, wanting instead for him to pursue a trade, Martinez graduated in 1950 with a geology major and chemistry minor. Martinez says he felt sorry for his father, whose work at the drugstore entailed sitting at a counter and waiting on customers.

He didn’t want to do that kind of work, so he got a job drilling water wells in the Rio Grande Valley. Later, he labored as a roughneck for El Paso Natural Gas Company in its Northwestern, N.M., drilling fields. He aspired to get on there as a geologist with the company, but Maria had health problems so he says they returned to El Paso after about six months.

Martinez went to work for Southwestern Portland Cement Company in El Paso, eventually getting transferred to Victorville, Calif., where he became acutely aware of racial hostility toward Mexican Americans when he tried to purchase a house for his family in 1955.

“Prior to buying my house in Victorville, I visited another house and the seller was threatened with [a] suit if he sold it to ‘that Mexican,’” Martinez wrote the Project.

His response at the time?

This was a blow to Martinez, who had always thought of himself as simply an American rather than identifying himself with any particular racial group.

“I’m American,” he said. “It just happens that both my parents came from Mexico.”

María passed away in August of 1996 of heart and respiratory failure. Martinez resides these days in California with his second wife, Marilyn Jean Eckenberg Martinez, whom he married in July of 2000.

“Our country is not going to be a perfect world,” said Martinez, adding, however, that he’s optimistic about the future of race relations in the U.S.