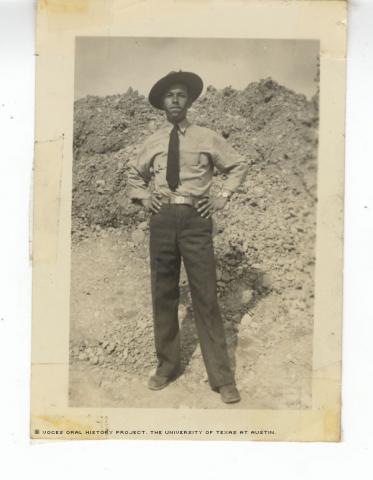 While he lived much of his youth during the Great Depression, Juan Lugo Martinez always talked about happy times, daughter Yolanda Martinez Guerra recalled in a tribute provided to Voces.

Juan Lugo Martinez was born on April 20, 1919, in Cuero, Texas, a town about 75 miles southeast of San Antonio. Martinez was the son of Luis Martinez, a railroad laborer, and Delfina Lugo. According to Guerra, Martinez and his two siblings were all born in different Texas towns as the family moved from town to town, following his father's work.

Martinez attended school up to fourth grade and then began working to support his family, who eventually settled in Crystal City, Texas. In his youth, he spent some time working in Montana and South Dakota.

Martinez was working on his car one morning, when he heard on the radio that the Japanese had bombed Pearl Harbor.

"He was in disbelief and quickly was ready to do what he had to do," Guerra wrote.

Martinez was inducted into the Army at Fort Sam Houston, near San Antonio, entering active service on Dec. 10, 1941 - only three days after the U.S. entered World War II. Eleven days later, he was sent to Camp Roberts, in California, to start basic training.

According to his discharge records, Martinez served for three years in Alaska as an Infantry gunner. His regiment was tasked with guarding an airfield on the route to Siberia.

"He would tell me how they would hear bombs and fighter airplanes above while they were underground in bunkers that they built. He was scared for sure!" Guerra wrote.

He left Alaska on Oct. 19, 1943, and reached the mainland United States on Oct. 25. He was honorably discharged on Nov. 3, 1945, at Fort McClellan, in Alabama, with the rank of private first class.

Martinez returned to Crystal City, Texas, and married Lilia Perez, a secretary with Del Monte, on May 7, 1947. They had three children: Juan Luis, Jose Indalecio and Yolanda.

For 25 years, Martinez worked at the Coca-Cola Bottling Co. as a route salesman. He was actively involved in the Crystal City American Legion Post 396 and was elected post commander, a position he held from September 1987 through September 1991.

In 1998, Martinez and his wife sold their house in Crystal City and moved to Seguin, Texas. By that time, they had both retired from their jobs and wanted to be closer to their grandchildren.

"My dad was a caring, selfless and hard-working man. He enjoyed life, he loved his country, and he enjoyed doting on his grandchildren," Guerra wrote.