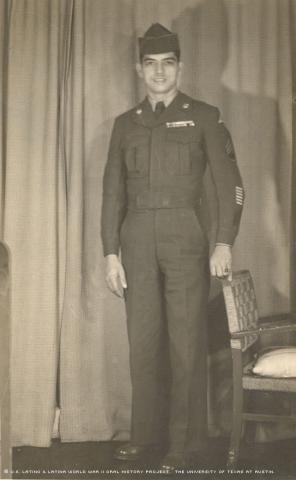 Puerto Rican Jose Medina-Negrón put college on hold when he volunteered to join the United States Army on July 15, 1943. He simply wanted to do his part, and says he didn’t know he was on the road to his future career.

Medina-Negrón’s path to cryptology unfolded in stages, beginning with a single test.

In 1955, as a technical sergeant with the 101st Airborne Division stationed at Fort Jackson in South Carolina, he took an intelligence cryptology aptitude test with 25 other soldiers. Of those 25, six were chosen for further training, including Medina-Negrón.

He was then sent to Fort Devens in Massachusetts in 1956 for three months of interception training with the Army Security Agency. That training led to a linguist and crypto-technician post in the Republic of Panama in 1957.

In 1959 Medina-Negrón returned to Fort Devens for Cryptologic School. Out of his class, 48 completed the training; he was fourth in his class.

In rank order, graduates chose their next assignment from 48 available posts. Medina-Negrón says he chose to go to the Philippines because it was the only place left he could take his family.

He and his family never went to the Philippines, though. His supervisor asked him to go to the National Security Agency in Maryland instead, because there wasn’t “one single bilingual in cryptanalysis,” Medina-Negrón recalled being told. Latin America was a heated place at the time, so his Spanish was a valuable asset.

Medina-Negrón was assigned to the NSA on August 15, 1960. He received his top-secret crypto clearance, which he would keep until he retired from the NSA in 1987.

Medina-Negrón had many high-profile assignments during his time at the NSA. Even now, he says he can’t talk specifics about events like the Bay of Pigs, the Cuban Missile Crisis or President Kennedy’s assassination. All he said was, “I was there.”

But that about says it all: He was in a serious line of work.

Despite his classified job, he received numerous commendations and awards from his superiors throughout his career, and recalls having 15 outstanding performance ratings during his time at the NSA alone.

Medina-Negrón’s greatest professional honor, the Legion of Merit, came as a complete surprise. That’s why he accepted it in someone else’s uniform.

He was called to the NSA director’s office and told to wear a military uniform and bring his family to a ceremony to accept an award.

“Sheesh, I don’t have no military clothing; I’ve been a civilian for two years,” said Medina-Negrón, adding that he ended up borrowing pants and a shirt from friends.

He says he assumed he was going to receive a Good Conduct Medal, even though he already had one. He was confused, however, when he saw the crowd at the ceremony, which included the highest-ranking woman in the agency, Juanita Moody.

“[N]ewspapers, publicity, the whole thing,” were present said Medina-Negrón, adding he figured someone else must be getting an important award at the ceremony.

When he realized his award was the Legion of Merit, he was shocked, but very proud.

The military gave the award “99% to officers, very seldom to noncommissioned officers,” he said, adding that it had been given to the commanders of the French and British forces after the Persian Gulf War, and that he “was in good company.”

Medina-Negrón earned the Legion of Merit for an important historical discovery he made shortly before he retired from the Army. His supervisor had asked him to take a look at some recently discovered American military messages from the early 1900s, from Fort Huachuca, located in southeast Arizona, about 15 miles north of the U.S.-Mexico border.

As Medina-Negrón systematically studied the codes, he recalls finding one word that occurred again and again: Geronimo. With that clue, he was able to decode more words, some of which were in Spanish. He deciphered more names, including Gen. John J. Pershing and Mexican Revolution leader Pancho Villa. In the end, Medina-Negrón was able to decode all but two of 42 communiqués total.

The decoded messages are now displayed in the military museum at Fort Huachuca, but Medina-Negrón’s name isn’t listed with them. It only says where they were found, even though he’s “the one who did the whole dirty work,” he said. Still, he considers it an honor to have been chosen to decode them.

As Medina-Negrón approached Army retirement, he planned to return to Puerto Rico, where he was raised. Then, the director of the NSA asked him if he would stay at the agency in a civilian job. Medina-Negrón’s supervisor asked what pay grade he would like to have, so he requested his current grade of GS-9, which he says was $8,000; however, two weeks later he was told he would receive a GS-11 pay grade, or $8,045. (GS-18 was the highest federal pay grade during his NSA days, explained Medina-Negrón over the phone after his interview.)

On Sept. 30, 1963, he retired from the Army as a sergeant first class after 20 years of service. He says he didn’t take much of a vacation before starting his civilian work.

Medina-Negrón would stay at the NSA working as a cryptanalyst for the rest of his career.

Before Medina-Negrón began his training in code-breaking, he had a number of posts. After completing basic training in Puerto Rico, Uncle Sam sent him to the Panama Canal Zone in September of 1943 for advance infantry training.

Medina-Negrón retired from the NSA in October of 1987, after 43 years, 11 months and 2 days of federal-government service. He now lives in Boynton Beach, Fla., with his wife, Angelica Rivera Medina-Negrón, whom he married in July of 1949. The main code work Medina-Negrón says he does these days is occasionally help Angelica with her crossword puzzle.

The Medina-Negróns eventually had three daughters and one son. Government service has become a family tradition, as their children have served in the Navy, Army and NSA.

Although his job wasn’t easy, Medina-Negrón says it was worth the frustration. He recalled that when he struggled with a code, it was best to go home and sleep on it, and by the next morning, he could “read it like a book.” It took persistence, discipline and sacrifice.

When he solved a code, he said he would “smile the NSA smile, and also the American people smile, because we are two paces in front of the enemy.”

Mr. Medina-Negrón was interviewed in Boynton Beach, Fla., on July 23, 2007, by Yazmin Lazcano.