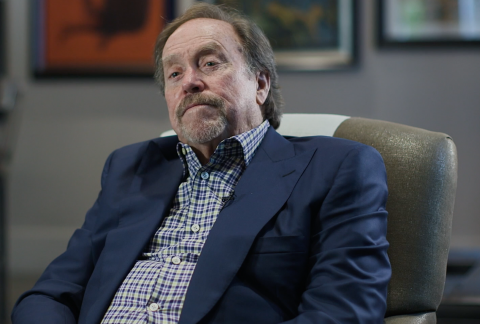 One day in December of 1960, José E. Souto ran into a friend as he was walking in the downtown Miami area. “I just ran into your dad,” the friend said. “My dad? No, my family is in Cuba,” Souto replied. The friend said, “No, no. They all came. They're all here.” His parents had sent him from Havana to Miami to study at the University of Miami. But the situation under dictator Fidel Castro was worsening for wealthy families such as theirs. Finally, his parents, brothers, grandmother and a cousin fled Cuba. “They decided overnight to move out of there,” Souto said, landing first in New Orleans and then moving to Miami. “I was very happy to see them there, but that was the end of Cuba for me and my family,” Souto said.

The family had left behind their cattle operations and a family coffee business founded in the 1850s. But his father, Pepe Souto, and his sons would rebuild the coffee business, riding on the growth of the Latin American community in the U.S. In the U.S., Pepe Souto told his son, “I don’t have any money to buy a farm and cattle. So the only thing I know how to do is sell coffee.” In Miami, Pepe Souto found a company to roast the coffee to create a Cuban-style coffee. Everyone in the family, including his wife, went door to door to find buyers. José Suoto said it was “kind of like Avon calling...Well, this was coffee calling.” People would recommend the coffee to their friends and relatives, and the business grew, little by little, he said.

The Cuban community in Miami was around 100,000 at the time. Everybody knew everyone else, and people were always willing to help each other. José Souto delivered coffee in the mornings, parked cars at night for extra cash, and took classes in the afternoon until 1965, when he graduated from college. In 1967, Pepe Suoto purchased the Cafe Pilón brand, the first of several acquisitions that would turn the struggling startup into a powerful player in the Cuban-style coffee business. Café Pilón’s website says when former owner Manuel Bascuas -- also a Cuban emigre -- wanted to retire, he offered Pepe Souto an administrative job. Suoto declined, “as his dream was to grow his business and family brand,” the website says. Bascuas sold the company to a group of businessmen who didn’t understand the coffee business, and who later sold the company to Souto. After helping get the family business off the ground, Jose Souto wanted a suit-and-tie job when he graduated.

In 1966, he went to work as a menswear buyer for Boston-based department store chain Jordan Marsh, which had a division in Florida. But when Jordan Marsh offered him a promotion that required a move to Minnesota, Souto resigned in 1975. A short time after quitting, he showed up at his father’s office in Hialeah, a Miami suburb, for their weekly Saturday lunch. Souto started looking around. “What are you doing? You look like you're looking for something,” his father said. “I'm looking for a place to put a desk,” Souto said. “A desk?” his father responded. “What do you want a desk for?” “Because I'm coming to work here. I just gave my two weeks’ notice at Jordan Marsh,” Souto said. His father was thrilled. “It’s always been my dream that my sons could work with me.”

Both of Souto’s brothers, Jose Alberto and Angel, also quit their jobs to work for Café Pilón. By 1975, the company had about $300,000 a year in sales. In 1976, José Souto visited supermarket chain Winn-Dixie to try to sell them his family’s coffee. The buyer recognized his last name -- he had happened to go to high school in Cuba with Souto’s cousin. “Here I am trying to sell to this buyer — who just to get an appointment with was a major thing — and this guy all of a sudden knows me and knows my family,” Souto said. “We hit it off.” The company received its first large order, 5,000 cans. With only one machine that filled cans one at a time, they worked 24 hours a day to fill that order, Souto said.

In 1982, José Souto decided to make a trip to New York City because Café Bustelo, their biggest competitor, was doing well there. The large displays of Cuban coffee in the grocery stores opened his eyes, and he recognized the magnitude of the Latin American market in the region -- 5 million Latinos within 50 miles of New York City. He called his father. “We got to be here..We got to come fight the battle here.” As Cafe Pilón grew, it attracted attention from rivals. John Cortez, a top salesman with the El Pico coffee company in New York, reached out to Souto and flew to Miami to meet with him. Cortez was interested because Café Pilón was cutting into his Miami sales. Cortez offered to work for the Soutos and brought with him four of his top New York salesmen. Shortly after, the company was selling 4,000 cases of coffee a month, compared to the Winn-Dixie order of just 5,000 cases in three months. In the following years, the Latino population in the U.S. continued to grow. A major surge came in 1980, when more than 100,000 Cubans fled to Florida in boats, in what was called the Mariel Boatlift. As the Latino population grew in the U.S., so did the interest in strong Cuban-style espresso. In 1985, Café Pilón bought the first brick-pack coffee machine in the U.S, which allowed the company to switch from cans to vacuum-packed bags that keep the coffee fresh longer.

Later that year, one of Souto’s brothers knocked on his office door. “Hey, I have somebody here I’d like you to meet,” his brother said. “This is Mr. Starbucks.” (Souto didn’t recall the man’s name, but said it was not Howard Schultz, Starbucks’ longtime CEO.) Starbucks planned to buy two brick-pack machines and open espresso shops in Seattle, similar to the shops in Italy. The visitor came to see the brick-pack machine and learn how it worked. “I'm saying to myself, ‘This guy's taking a big risk. He's buying two million-dollar machines, and he only sells five million pounds of coffee a year. Wow, I hope he does OK,’” Souto said. “What a story, you know, Starbucks -- a billion-dollar company nowadays!” The 1970s brought more Cubans to South Florida, as well as people from countries such as Nicaragua. “And the Cuban coffee thing was starting to happen,” Soutos said. In 2000, the Soutos bought Café Bustelo, which had about 80 percent of the market.

The opportunity came “out of the blue,” Souto said, when the company got a call from Tetley USA, which owned Bustelo. Tetley sent a delegation to Miami, revealing that the company was for sale. The Soutos were able to seal the deal, with GE as an 50-percent investor. Two years later, the Soutos bought out GE and had sole control of the company. Pepé Souto died in November of 2007. Four years later, the J. M. Smucker Co. wanted to add Café Pilón to its holdings. Smucker executives came to Miami and asked Jose Souto how much he wanted. He said $360 million, never imagining that they would agree. By the time of the sale, Café Pilón’s sales were $115 million a year -- up from $300,000 in the early years. Jose Souto was proud of working for the family business. “One of the things I take as an accomplishment was that me and my brothers and my dad worked for 35 years together. ...It's not easy. You need to give and take a lot. That was what helped us become a success, because you know we all made decisions, and we always said we're all in. If one disagrees, we better convince him because otherwise it’s a no.” His brothers are no longer involved in business, but Souto has invested in airports, liquor stores and a stevia farm in Ecuador.

Mr. Souto was interviewed by Maggie Rivas-Rodriguez on February 27, 2020, in Coral Gables, FL.