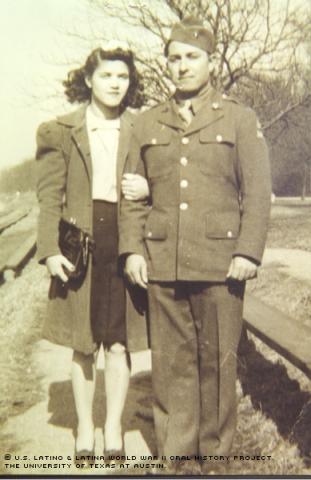 Johnnie W. Flores was the fifth of seven children born to Jose Maria and Teresa (Huizar) Flores, on a farm outside of Somerset, Texas, a community southeast of San Antonio.

In the mid-1930s, Johnnie moved to Los Angeles, where he lived and worked until he enlisted in the Army in 1941. He served with the Co. B, 36th Infantry Regiment.

In letters home, Flores sent regards to his family and to family friends, sometimes thanking them for sending him homemade candy. In those letters, Johnnie Flores was affectionate - calling his sister Stella F. McGee his "dear sister," repeatedly asking if money he wired home had arrived. He told his parents back home in Poteet, in August 1944, that France is "very green and beautiful but most of the towns are destroyed flat to the ground by bombs and heavy shelling, as you see in the newspapers. It's terrible for these French people and all of us but it has to be done to drive the Germans out."

In one letter from Camp Pickett, Va., on November 23, 1942, he brought up the issue of money and the possibility of not coming back.

"The other day I signed in for a $10,000.00 insurance," he wrote. "I am paying $7 a month. As our captain told us that it was better to get in the insurance now as its our last chance as soldiers got it since we were at Camp Polk [Louisiana]. So I made up my mind and signed it too, in case we get to go across and fight and in case we get bompt [bumped] off. My dear mother and father and all of you at least have something to collect... I also made an allotment to send mother $25.00 monthly from my $50.00 pay check so she can save for me or use it when ever she needs it.''

Flores said it would be better to send the money home than to waste it on beer.

"And as they tell me that if we go across [to war overseas] we can't spend our money as there they will not give us many weekend passes out in the jungles," he said.

While stationed at Indiantown Gap, Pennsylvania, Flores went out with a young woman named Josephine Adams. The two corresponded during the war. After Flores death, Adams continued to write to Teresa Flores, Flores' sister, for a few months.

Back home, Flores apparently had other girlfriends, as he mentions in letters to family members. In one letter, he worries that one girl will worry too much about him.

Fred Flores, son of the oldest Flores child, Albert, compiled photocopies of letters written by his uncle to family members.

Fred Flores, the nephew recalls with clarity the news that would crush the family.

"On New Year's eve afternoon, December 31, 1944, a telegram arrived at my grandparents' home on the farm, advising them that Johnnie was missing in action in Germany," Fred Flores wrote. "Everyone took the news that he had been killed... I recall all of us going to grandmother's house. I remember her crying pretty much non-stop. This was not a place I wanted to be at that age of seven. Our Aunt Teresa was keeping us busy outside, by playing ring around the rosy by the dim light of a kerosene lamp which was coming thru the door. There was no electricity...."

Later, the worst fears were confirmed, Johnnie Flores had been killed in action. His remains were buried first in Belgium and later, in 1947, reinterred in Fort Sam Houston, San Antonio, Texas.

"My generation is the last to have seen or known Johnnie, though only through short fleeting youthful memories," Fred Flores wrote the Project. "It is for this reason that I have gathered all that I could of Johnnie's life, to provide it for the next generations of this family."