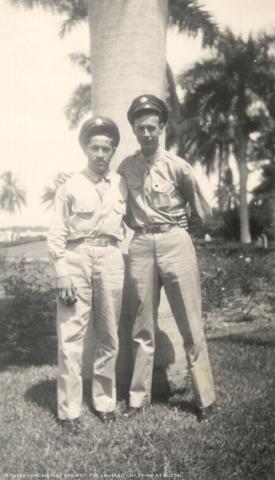 Even at almost 90 years old, World War II veteran John S. Hernandez can recall the challenges facing him on his first day of kindergarten at Belvedere Elementary School in Los Angeles.

His ability to learn English in school was just one of many accomplishments he would attain: successful businessman; recipient of the Purple Heart and the Prisoner of War Medal, among other medals; and father who gave his children an education. Hernandez said he owes his accomplishments to a strong belief in the value of hard work and perseverance in the face of obstacles.

Hernandez was born to Miguel Hernandez and Ruth Sanchez in Los Angeles on Oct. 20, 1915. The family had 14 children, although only three lived past infancy, including John. His younger sister, Maria, died at 11 of meningitis.

In elementary school, Hernandez said he dealt with discriminatory remarks. Hernandez and his older brother Patrick fought children who insulted their heritage.

"If anyone called me a dirty Mexican, I'd say, 'Look, I'll see you outside after school,'" he said. "I'm not going to let you call me that, (and) get away with it."

His father showed the long-term determination that would mark Hernandez's life when he spent 17 years building the family home with whatever he could save. His mother was frugal, Hernandez said.

"She never spent money on luxuries," he recalled. "She said, 'We can't afford luxury. Let's make the best of what we have and let's save some money.'"

The family worked as agricultural laborers earning $1.50 a day. During the Great Depression, Hernandez dropped out of his senior year at Garfield High School to join the Civilian Conservation Corps to help his family.

Outside of his official forestry duties, Hernandez found income in cutting hair, which he had done since childhood, and cleaning officers' rooms.

"I used to like to hustle," he said. "I wanted money because I was tired of living in poverty. So I wanted to better myself."

After his term in the CCC ended, Hernandez served as an apprentice in Patrick's upholstery business beginning in 1937. In 1939 he and his father opened a liquor store named Johnny's Liquor. After a full day of working at the upholstery business, he would shower, eat dinner, and then work at the liquor store until it closed at 10 p.m.

When he was drafted into the Army in 1942 at the age of 27, his mother urged his father to move the family to Mexico. Hernandez's father did not like the idea of Hernandez leaving them but did not respond to her request. Hernandez felt the draft disrupted his family's hard work.

"When we started our own business, we could see our economic situation getting better, especially with the job I had, and that's why I hated to go to the Army," Hernandez said.

Hernandez reported to his initial duty station in San Pedro, California, and completed basic training in St. Petersburg, Florida. He met people from different parts of the country and developed friendships based on shared experiences.

"Nobody knew no one," he said. "But you're living together, you're eating together and you're training together. You have no choice but get along and know each other, you know? They become your buddies because they're in the same fix you are."

Hernandez served in the Army Air Forces as a side-gunner on a B26 Medium Bomber. One day, after the crew had destroyed an Italian railroad station to cut off German transportation, German forces attacked and damaged his plane. Hernandez was forced to bail out, and the enemy fired at him as he descended in his parachute. He avoided being hit, but when he landed on a ranch outside Viterbo, he broke his ankle and was captured.

Hernandez was flown to a hospital in Verona, and two months later was transported to a German POW camp. The journey to the camp, called Stalag II-B was brutal.Prisoners were hauled in crowded rail boxcars, with no access to food or water. Hernandez said that during his 14-month stay at Stalag II-B, he was fed a starvation diet and left weighing only 88 pounds.

He credited his Catholic faith with his ability to survive.

"When you have Jesus in your life, nothing is impossible," he said. "See, all those plans that you make are going to work out for you."

When he returned from the war, Hernandez was shocked to learn that his father had died three months earlier. He buried the pain of war and his father's death to focus on the family liquor store business.

"It doesn't do me any good for people to feel sorry for me," he said. "That doesn't make me any money."

A woman Hernandez had written to during the war wanted to pursue a relationship with him afterward, but he declined.

"I didn't get married because I didn't want my wife to suffer poverty," he said. "I said to myself, 'I have to better my life before I get married.'"

He eventually married Beatriz Becerra in 1954. The couple had eight children -five daughters and three sons - all of whom went to college.

Hernandez takes pride in his children's education and appreciates how that education has helped them attain jobs with good salaries. Yet, when he looks back over his life and his children's accomplishments, he feels education is not as important as the values he passed on from his parents.

"My folks didn't have any money. They didn't have an education," Hernandez said. "But sometimes you don't need an education. What you need more is a desire to better yourself and not have nobody feel sorry for you."

Mr. Hernandez was interviewed by Nikki Cruz Jones in Whittier, California, on Oct. 16, 2005.