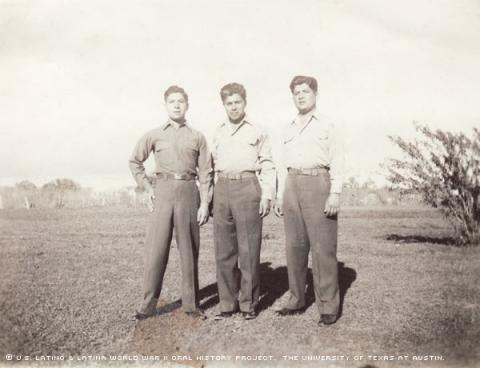 As an Army veteran, Joe Villa has experienced his ups and down throughout life. From coming close to death as a baby to venturing through Nazi territory, the 83-year old has seen more than what his small Texas town ever expected.

Villa was born in Yorktown, Texas, about 75 miles southeast of San Antonio. Villa’s mother died when he was a baby, and his father was left to take care of him, his two brothers and one sister. His father was a laborer in the city, working on railroads and carpentry, and he had very little money to support his family. Many of the neighborhood women asked to adopt Villa as a baby. They wanted to him to escape from what they believed was not a suitable lifestyle for a baby boy. But Villa’s father refused to give up his son.

By age two, Villa grew very sick. He later theorized he may have suffered from food poisoning. He lost a large amount of weight, and all of the neighborhood women who wanted him turned away. Many thought he had very little time left to live. His father tried to care for him, and he prayed. Villa believes it was God’s will that kept him alive through his sickness. “There was a reason [he survived].” We just pray and say ‘thank you, sir.’ ”

Villa overcame the illness, and he enjoyed the normal life of a boy in the Texas countryside. In school, he learned English, which was his least favorite subject.

At age 18, while still in high school, he was drafted into the United States Army.

“I got a card from the president,” says Villa. “In a way I was happy because I was not doing well in school.”

But Villa was also concerned. He had never left his town before, and he feared he would not know what to do in a different country.

Villa was officially drafted on Dec. 6, 1945, a few months after the end of World War II.

After completing his training in Fort Sill, Okla., a base about 85 miles southwest of Oklahoma City, Villa was shipped to California, New Jersey and finally to Germany. Villa’s unit, Company B of the 397th Military Police Battalion, worked as a railroad security guard, protecting supplies and food for the soldiers and the poor in Nuremberg, a town about 100 miles north of Munich.

The city was significant during the Nazi era. Because of its centralized location in Germany, it was the location of Nazi conventions known as the Nuremberg Rallies. The Nuremberg trials, which brought German officials involved in the Holocaust before an international war crimes tribunal, were also held in that town years later, just two blocks from where Villa had worked.

At one point Villa and another soldier -- his only Latino friend -- were unexpectedly called into the intelligence office for questioning. He and his colleague were later thrown in the back of jeep and transported for 300 miles without food or drink. Neither knew where they were headed or what they had done, but they suspected the worst. When they arrived to an unknown destination, a woman greeted them by telling them they could go back. They were released.

Two weeks before, a U.S. soldier had thrown a hand grenade into one of the trains that Villa worked on. U.S. intelligence suspected it was Villa, his friend, and this other soldier. However, during their long ride in the back of a jeep, intelligence had learned that Villa was actually at “Hitler’s Plaza” on the night the grenade was thrown, a place where so many rallies had been held years before.

Villa thanks God for this alibi, for he believes he could have easily been accused of the crime and been shipped back to America to be punished.

Villa says he was one of the few Latinos in his division, and he says he never felt discriminated against. He did notice, however, that several men did get promoted above him, but he blames this on his broken English.

After a year in the military, soldiers were allowed a three-day weekend. They could choose a location to visit, and a military truck would take them to wherever they chose. Villa and his friend chose to go to the “Eagle’s Nest,” Hitler’s mountaintop hideaway in Austria.

As Villa and his friend explored the home, they found themselves in a tunnel that took them miles away from the mansion, and they didn’t make it back to the truck that was to take them back. It had to leave without them. They were stranded at Hitler’s house. Villa and his friend walked back to the city and eventually hitchhiked their way back to Berchtesgaden.

Villa has many stories like this -- from falling out of a train, trying to keep up with it and cutting his head on rocks to old friends almost accidently shooting him in the stomach -- twice.

In February of 1947, after two years in Germany, Villa was discharged from the Army as a private first class. He had received medals for the World War II victory, Army of Occupation, and Good Conduct.

Villa returned to his home in Yorktown, Texas. He returned to school and received $75 from the military every month. His father was still very poor, and by this time he had nine more children with another wife.

One weekend, Villa and friends traveled to Yoakum, Texas, to meet a couple of girls his friends knew. The date was July 18. That night, at 8:15 p.m., Villa sat with one of the girls on the porch at a friend’s house and talked. He had met Jamie Rodriguez, the woman who would be his wife of 58 years. Villa and his wife celebrate the date and time every year.

After their marriage, the Villas moved to Yoakum, where they had three boys – Joseph Michael, John Anthony, Patrick Timothy -- and one girl, Ora Nell. Villa worked mostly in carpentry after a brief stint in vacuum sales, and his wife worked as a leather laborer.

Villa had many adventures during his two years overseas but none capture how he truly feels about war. “There shouldn’t be war. I believe the big shots could settle things in a manner that won’t kill innocent boys.”

Throughout his description of his time overseas, Villa constantly refers to soldiers as boys, not men. Perhaps, looking back, this is how Villa saw himself: a boy with nothing but adventures ahead and behind him.