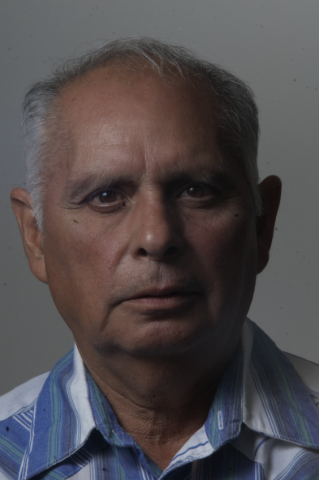 During the 13-day Cuban missile crisis in 1962, Jesse Montenegro was in the 15th Air Force HQ Missile Division at March Air Force Base in Riverside, California.

He remembers that the crisis -- from Oct. 14 to Oct. 28 -- had a bigger effect on him and his family than the Vietnam War did.

During the 1962 crisis, the Soviets had sent nuclear missiles to Cuba. That created the potential of war between the superpowers. The U.S. imposed a naval blockade of the island nation and stared down the Soviets, forcing them to withdraw the missiles in exchange for a U.S. agreement not to invade Cuba.

Montenegro's job at the time was to oversee missile silos that were in the area.

The American public did not know the true extent of the missile crisis, Montenegro said, because “the government cannot or should not tell its citizens everything.”

Jesse Boniface Montenegro was born June 5, 1942, in Sharon, Kansas. He lived on a farm with his parents; the family had 11 children. His parents, Hermenegildo and Manuela Ledesma Montenegro, were Mexican immigrants who thought it was important for him to learn English as his primary language, so they did not teach him Spanish.

In his early school years, Montenegro said he walked a half-mile to a one-room country school where there were just 12 children in his class. In middle school, he attended a small public school where he was segregated with other Hispanic students. He said he felt very uncomfortable in that environment and left after a year.

In high school, Montenegro started to blossom as a person. He went to Wellington High School in Kansas, where he became friends with people of many ethnicities. Montenegro said his greatest memories from high school were when he “let his inner country boy come out,” and he recalled chasing animals out of their pens.

It was in high school that Jesse decided to join the military. His family had a history of military service; one of his brothers was a paratrooper and two were soldiers in the Army. He said he enlisted after a group of his Hispanic friends talked him into visiting the recruitment office. He was inducted in June 1961.

Montenegro was stationed at March Air Force Base for all four years of his service. His title was administrative specialist and he was assigned to the Missile Division within Headquarters, 15th Air Force. When the Vietnam War started, he volunteered to be deployed, because he felt it was “better to be over there than over here,” and that serving in Vietnam would help him find himself. But he was assigned to an administrative job stateside.

He admitted that he was not initially comfortable with homosexuals in the service. He said during his military career, he had a total of three gay roommates. They made him uncomfortable and he asked for a change in housing. He also remembered one of the men he served with was discharged for being openly gay. In recent years, Montenegro has come to realize that some people are born homosexual and he now has no reservations about gays serving in the military.

He partially blames the media for the protests, saying that the media “control the weak-minded and make everything out to be worse than it really is.”

Montenegro was discharged in June 1965 and went to work for the U.S. Postal Service. He and his wife, Pamela, married on May 23, 1970. They have four children, one of whom enlisted in the Army.

He worked in administration in the Postal Service, and was also chosen to serve on a newly organized diversity committee and ended up as chairman.

He values military service and supports reinstating the draft. “If you don’t know where you’re going or what you want to do with your life, commit two years to the military and that will set you straight.”

He compares the military to an “antibody,” adding, “When something goes wrong in the country, the military bands together to fight and try to make it right."

He thinks of the Air Force as his family and looks back at his years of service with fond memories.

Jesse Montenegro was interviewed by Sheila Kinnard in Wichita, Kansas, on June 15, 2010.