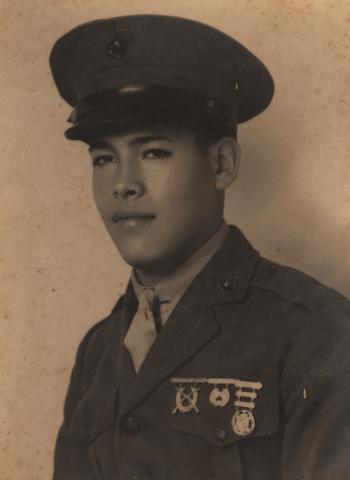 With an older brother John already serving in the Army in Europe, James DeLeon was adamant about going to serve his country during World War II.

"My parents were against me joining, but I thought I should do my part," DeLeon said.

His parents finally gave him the permission he needed to join the Marines and went to boot camp. When asked why the he joined the Marines, his answer was simple.

"They were the best," DeLeon said.

His younger brother, Charlie, then 16, would follow a few weeks later, joining the Navy after doctoring his birth certificate to allow him to be admitted into the armed forces.

(Years later at family reunions, after the three brothers were grown and had children of their own, they debated which branch of service was superior, as they had served in all four: the Marines, the Navy, the Army and the Air Force.)

Born in Goliad, Texas, 100 miles southwest from Houston, DeLeon was one of nine children born to Carlos and Charlotta (Bocanegra) De Leon. The elder DeLeon worked in railroad construction.

DeLeon attended, but did not complete high school. At the time that the war broke out, he was working as a delivery man for a tailor shop in Ganado.

DeLeon was not sent off to war immediately. Rather he served as a prison guard for a naval prison in Vallejo, California. DeLeon was a guard for just a brief amount of time, before beginning his training at Moffit Field, just east of San Jose, Ca.

This was DeLeon's last U.S. stop before being sent into battle in August 1942. He began his service as a member of the 1st Marine Company B, 5th Battalion. At war's end, he was with the 6th Marine Division, Company D and had been promoted to corporal.

DeLeon was part of 6,000 Marines sent to Guadalcanal, which is part of the Solomon Islands in the South Pacific, seizing the island's airfield, that Japanese troopers had begun constructing just a month prior.

The Japanese defenders were greatly outnumbered by the U.S. troops, with just 2,000 soldiers and called on reinforcement to maintain the island.

By October, Japanese had 36,000 soldiers to combat the American armed forces in Guadalcanal's jungles, but the Japanese were unable to regain control of the airfield.

The following month, U.S. landed naval reinforcement on the island and increased its numbers of military on the island over the next months, with 44,000 on Guadalcanal U.S. soldiers in January.

As naval troops were brought into Guadalcanal, DeLeon's unit was being shipped off the island for rest and relaxation.

DeLeon was not as lucky as his fellow Marines, who were sent to Australia. Rather, he was sent to New Caledonia to recover from malaria.

"The rest of the division had a hell of good time and I didn't have nothing," DeLeon said.

DeLeon's next mission was to secure the island of New Georgia, northwest of Guadalcanal, were the Japanese had established several airfields on the island, before the U.S. took control of the island in October 1943.

DeLeon was in New Georgia briefly before heading to Okinawa, the site of one of the fiercest battles in World War II and the place he would stay the longest.

"When we landed we were under fire," DeLeon said.

Immediately, DeLeon and his division were digging underground trenches to escape snipers, fighting to survive.

The division would attack an area, secure it and then move on with the use of a Browning automatic rifle, weighing 20 lb. and often time used off DeLeon's shoulder.

DeLeon would find himself defending his troops in Okinawa for about three to five months, until the end of the war, being in one of the few divisions that were unhurt during their combat.

"We were lucky and just keep moving," DeLeon said.

After the atomic bombings on Japan, the U.S. received a formal surrender from the Japanese on August 10, 1945, but DeLeon and troops would not find out about the surrender for days later.

However, DeLeon says that he remembers his thoughts when he found out he would be leaving the combat zone.

"All we knew was that we were going to get something to eat," DeLeon said.

DeLeon soon found himself back in the U.S., going to church with his mother almost immediately after getting off his ship.

The DeLeons had moved to Los Angeles for better work opportunity for the elder Mr. DeLeon. An added benefit of the relocation, however, was that the DeLeon brothers, who were stationed in the Los Angeles area at a time, would be able to visit more easily.

DeLeon made plans to attend college, but after spending Thanksgiving with his family in Los Angeles, he returned to Texas to visit his girlfriend who wrote him during his tour.

After spending a month in Port Arthur, Texas, he married Susie Marie Elizondo, and took one job after another, including one at a shipyard.

However, DeLeon soon joined his wife at the local Texaco refining plant, where he worked as a carpenter for almost 40 years.