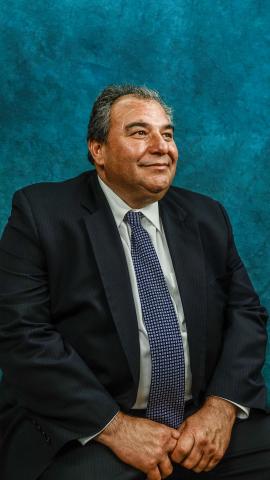 Jaime Palacios was the first of three children, born in San Juan, Texas on November 15, 1960, to Berta (Saenz) and Hector ‘Tito’ Palacios. From an early age, Palacios looked to his parents for guidance on education. After graduating from Pharr-San Juan-Alamo High School in 1979, Palacios weighed his options: he could join the military, or play football or baseball. Eventually, his mom convinced him to stay in the Valley and start school at a Pan American University in Edinburg.

After graduating from Pan American in 1984, with a degree in political science, Palacios again found himself torn between leaving the Valley to continue law school, or staying and attending an unaccredited school, Reynaldo Garza. A family friend, state senator Raul Longoria helped Palacios decide to attend Reynaldo Garza School of Law.

Reynaldo Garza never received the accreditation from the American Bar Association (ABA). When it became clear they wouldn’t be accredited, Palacios said about half of its students left. The remaining 30 students were left unsure whether they would be allowed to take the Texas State Bar Exam, necessary to practice law.  Palacios considered looking at other law schools but many schools wouldn’t transfer Reynaldo Garza’s credits, so Palacios stayed at Reynaldo Garza and fought for its legitimacy. But even without accreditation, the Supreme Court of Texas could grant the students waivers to take the state bar exam. Palacios continued to work with community leaders, professors, and classmates to get those waivers. Palacios graduated from Reynaldo Garza Law School in 1989 and passed the bar exam in 1991. Still, in the years following their time at Reynaldo Garza, he and fellow alumni found they faced prejudice in the courtroom for attending an unaccredited law school. Palacios pushed ahead, remembering the words of a close friend and fellow lawyer, Hermes Villarreal.