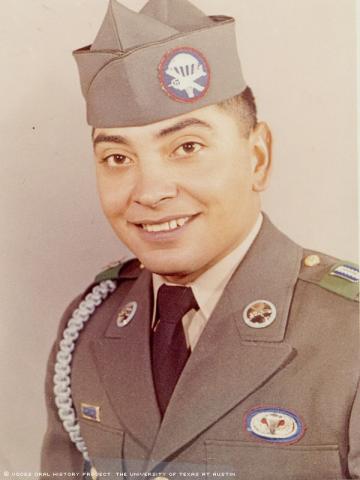 Army Capt. Isaac Camacho vividly recalled the terrible night when he was captured by Viet Cong. It was the night of President John F. Kennedy’s assassination in Dallas, Texas. He was held for nearly two years until he fled, becoming the first U.S. prisoner to escape from Viet Cong captivity. That evening, Nov. 22, 1963, the Viet Cong forces started firing mortars into the Hiep Hoa U.S. Army Special Forces base camp, in South Vietnam, about 35 miles north of Saigon (now Ho Chi Minh City). While half of his team was away, he said, Viet Cong fighters infiltrated the camp, silently killed guards and forced Vietnamese civilians to lay down their weapons — they only wanted to kill the Americans.

“They’re crawling all over the fences, they’re coming in to get us and we’re just not going to be able to defend ourselves,” Camacho recalled. “It was really bad; I’m lucky to be alive.”

Although he survived the intense attack, Camacho and the three other men captured by the Viet Cong were beaten and blindfolded. They were transported like cargo to one of the guerilla army’s bases. Camacho lived in shackles and was confined to cages, one of which was just six by eight feet, for much of the next 21 months.

Born and raised in Fabens, a small town 31 miles southeast of El Paso, Texas, Camacho lived a relatively quiet childhood with his parents and sister. His father, Pablo Camacho, owned his own trucking business, while his mother, Maria, tended to the house and the children. Although his father never had a formal education, Camacho said he made a good living with his business, which typically consisted of picking up the crops that farmers grew in the lower valley – usually cotton or hay bales.

The younger Camacho recalled how, when he was four years old, he was barely tall enough to reach the steering wheel of his father’s truck. He said he helped his father drive the trucks on the crop fields.

“I didn’t like the idea of getting up at four o’ clock in the morning and having to go out there and help him,” Camacho added.

He held other jobs as a boy, such as picking cotton or assisting the local judge in Fabens with clerical work. When his father died in a car accident, however, 13-year-old Camacho, his mother and sister moved to El Paso. The young Camacho started earning money as a grocery store bagger to support his family.

“I really had to bite down on my studies, because I didn’t have that much time like other kids had,” Camacho said. “When school lets out, they have a chance to do homework. I didn’t. As soon as school let out, I’d go to my job.”

Although Camacho never cared much for his studies, he found a passion for the Junior Reserve Officers’ Training Corps (ROTC) at Thomas Jefferson High School and became the captain of his rifle team. He enlisted the day after his 18th birthday, inspired by these experiences, his affinity for World War II movies and the allure of Army recruiters driving a Buick convertible to visit his high school.

He joined the elite Army Special Forces in 1951, and was stationed in Augsburg, Germany; Okinawa, Japan; Can Tho, South Vietnam, and Fort Bragg in North Carolina before serving in South Vietnam on his second tour. During that second tour Camacho’s assignment was to help train and equip South Vietnamese civilians.

Camacho admitted that he and other American soldiers thought they were superior to the Viet Cong, but the guerilla armies were the best trained troops in the world. They had excellent communication, were organized and studied everything the American media produced in newspapers, magazines and radio broadcasts. Camacho recalled that during one interrogation, the boss at the Communist camp said they didn’t need any information about him because they already knew who he was. He got a good sense of the Viet Cong’s communication system after his capture. When the guerillas removed his blindfold, he found himself sitting in front of a small kitchen radio in one of their huts.

“There was some way they could get into our airwaves,” Camacho said. “They pushed a button and I could hear my boss telling the people at my camp, ‘So what you’re telling me is that my camp is destroyed and I have four American bodies missing?’” Camacho said that the Communist captor then shut it off and laughed.

Despite the Viet Cong’s careful surveillance, Camacho had been devising a way to escape since the first day. He managed to work one bar in his cage loose, leaving just enough space for him to slither out like a snake. He had been losing weight rapidly, as the POWs were fed meager portions of rice, dry fish and soup made from jungle vines, and this would aid him in his ability to flee. Camacho said he lost about 50 pounds.

Finally, 21 months into captivity, Camacho made his move. The Viet Cong were bringing in two more American prisoners and removed Camacho’s shackles to put on one of the new prisoners. Luckily, it was monsoon season, and when the rain was falling in heavy curtains, Camacho silently lifted the bar and darted into the jungle.

After running through the jungle for about 40 minutes, Camacho had made a circle back to the guerilla camp. Tired, malnourished and now discouraged, Camacho, then 28, had thoughts about giving up and returning to his cage. Knowing the Communists would kill him, however, Camacho decided against it. He looked down at the ground in front of him and saw a dry leaf floating down a small stream of water.

“That’s it!” Camacho recalled thinking. “They taught me that in survival training. I followed the little rivulet, and it took me to a wider rivulet, and then I made it to the river.”

He swam until daylight and eventually made his way to a road and then to a U.S.-occupied rubber plantation.

“That was the first sign of civilization that I had seen,” Camacho said. “I was just elated.”