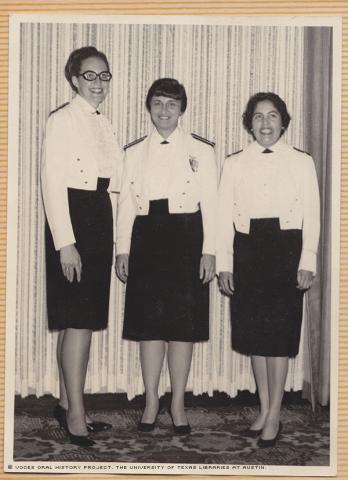 What began as a harmless bet led to the opportunity of a lifetime for U.S. Air Force veteran Herlinda Gutierrez - "I enlisted on a dare," she said.

Gutierrez remembered one day she and the girls at work were imagining what their lives could be if they were in the military, although it was something of a longshot. Not only were they all nurses but, aside from Gutierrez, most of them were also married and had children.

As a bet, they applied to different branches of the military. After attending the initial recruiting session, she was the only one accepted into the Air Force.

Little did she know when she enlisted in the Air Force in May 1961 that her military service would last 20 years.

Excited to start her new adventurous life, she began her first assignment stationed near home at a hospital.

"I joined the military to see the world, and I got stationed here in San Antonio," Gutierrez said with a laugh.

But in January 1964 she was assigned to North Africa as a military nurse and that led to other travel outside of the United States.

While in Libya, she tended to the soldiers and those working for the United States abroad. Gutierrez was assigned to operating rooms, tending to military, retirees and their dependents in what she described as "Third World countries" that lacked resources.

She received basic military training in Alabama, which was not extensive, and did not expose her to weaponry or combat. It wasn't until she was stationed in Japan in 1966, that she was trained in gun handling and sea survival skills. She had to obtain "flight-status" to be able to fly and transport Americans and civilians living on U.S. bases. She went on to receive formal flight training in May 1966 at the School of Aviation Medicine, in San Antonio.

She said that this allowed her to be a part of the medical corps, which picked up wounded soldiers during the Vietnam War and transported them to larger U.S. facilities for surgery and emergency care.

While working as a nurse in the Air Force, she recalled, free time was a luxury.

"Being stateside was like being at home, you did what you could if you had time," Gutierrez said. That, however, contrasted to life at Wheelus Air Force Base, near Tripoli, the capital of Libya.. Leisure activities there, she said, were limited to bowling and swimming. Outside the base, one could go shopping.

She was one of three daughters of Mexican-born Ruben Gutierrez and his wife, Juanita, who was a Texas native. When she was growing up, she enjoyed time at home with the family, singing songs around the house with her mother. After college, she continued living at home, while she began working as a nurse in San Antonio.

For Gutierrez, discrimination was only a minor issue growing up in San Antonio. It wasn't until she was in the military that she realized she was the only Latina nurse during her assignments in the early 1960s. The few Hispanics who were men worked as medical technicians or doctors.

Rather than having had to deal with discrimination in the service, Gutierrez was shocked and disappointed to find after her discharge that that not too many civilians cared for servicemen and wome. She said that, nonetheless, she was proud to have served in the military and would recommend the experience to other women.

Ms. Gutierrez was interviewed by Laura Barberena in San Antonio on May 6, 2010.