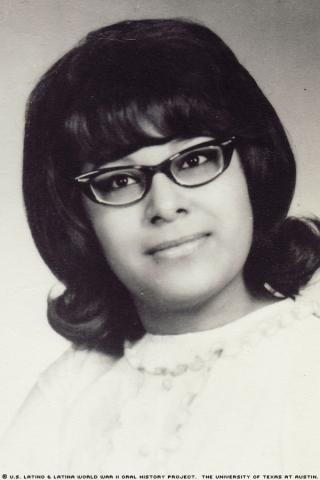 For many Hispanics, the Vietnam War era often led to conflicts between their deep loyalty for the United States and the emerging civil rights movement in barrios across the country, even as the traditional roles were changing in Latino households.

Unlike many Mexican-American women during the 1960s, Guadalupe Martinez didn’t want to be a stay-at-home mom, or clean houses and offices. She understood the importance of higher education and decided to pursue her dreams of becoming a legal assistant.

Born on March 13, 1950 in Topeka, Kansas, she attended Topeka High School, a mostly white school with neither Latino nor African-American teachers on its staff. Although the school was not segregated, the students themselves did not mix with peers outside their race or ethnic group.

During the Vietnam War, protesters were making headlines everywhere, and, although Martinez didn’t share in the anti-war feelings, she did listen to the music. Artists, such as Bob Dylan, Creedence Clearwater Revival and The Beatles put a voice to the thoughts and feelings of the younger generation.

“I never understood why people would protest something they had never participated in. But, at the same time, I was kind of an enigma,” Martinez said with a laugh. She understood that the young men who were drafted had no choice.

Born to first generation Mexican-American parents, Martinez was a young adult during the Vietnam War era, the first-born of six children--two girls and four boys. Although her family didn’t have much money, her parents were very charitable and generous with whatever they could afford to give or do for others.

Her family lived in a predominantly Mexican-American area of town and was active in the Our Lady of Guadalupe Roman Catholic Church, which was the center for her family and her community. It was formed by her grandparents’ generation of immigrant Mexicans who came to the United States during the boom in the railroad industry in the early 1900s.

She recalled how, when she was 9, she was mesmerized by her cousin’s job as a legal assistant. To Martinez, that job exemplified power and glamour. In high school she took a Business Law course, as well as every other business class available, and she focused on English. She knew very early on that her education would be geared towards achieving those goals for herself.

After graduating from high school she went to business school and took legal secretarial courses. When she graduated, she was offered a legal secretary position with a law firm.

She was 21 when she married Michael L. Martinez. They had met when they were introduced at a dance by her brother, who was dating Martinez’s sister.

Before their union, she corresponded with Martinez for a couple of years while he was serving as a U.S. Marine in Vietnam. She kept the letters over the years and opened them during her interview. His romanticism still surprises her.

“Aw, he was romantic back in the day! If I showed him these and read them to him, he’d say ‘Who is that?’ ” Guadalupe Martinez said blushing. She said the main reason she kept the letters was to show her children what their parents were like as young adults.

Guadalupe Martinez admitted she fell in love with her husband because he was handsome in uniform; she had always had a thing for men in the service. During their conversations and correspondence, she found they had similar goals for their future.

While attending Washburn University in Topeka, she took business and law classes to help her get into the legal field. At the time, most high school graduates of Latino descent did not attend college.

“Latinos were never told what to do or given help to get to college. Nobody ever said, ‘You can do it.’ And so I had to do it on my own,” she added.

After getting married, Martinez and her husband moved out of state so he could attend drafting school. When they returned to Topeka, Martinez left the legal field and went to work for a publishing company. During that time they had two children, Eulalia Belen Martinez (now Ramirez) and Simon Gerard Martinez. At age 20, her daughter enlisted in the Air Force, which was a huge shock for both Martinez and her husband.

“She was always very delicada [delicate] and never seemed like the type that would want to go off to the service. I think she did it as kind of a rebellious thing. ... She wanted to get away from the parent telling her what to do,” Martinez said.

Their son, however, also made them proud when he campaigned for and was crowned the first king of the Fiesta Mexicana. Prior to 1989, there had been only queens and their princesses. Martinez had been a princess at age 18.

After 10 years in publishing, she missed the legal field. So she began taking paralegal classes at Washburn University. Martinez’s husband and both their children obtained college degrees.

At the time of her interview, Martinez was working as an administrative assistant for Judge Henry W. Green Jr. at the Kansas Court of Appeals. She was looking forward to retirement to be able to spend time with her husband, children and grandchildren.

“They are my life. I want to give them everything that I can... give them knowledge, instill in them hope, faith and charity.” Martinez said.