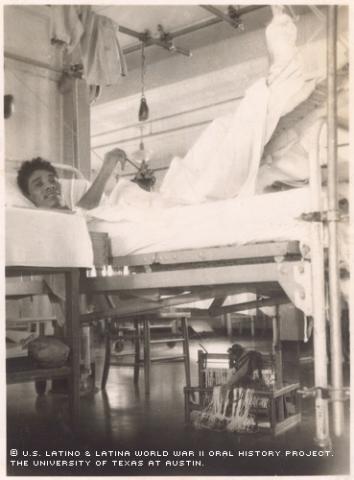 Gregoria Esquivel was strongly influenced by her uncles who served in the military during World War II. Their patriotism and involvement in the war effort helped shape her perspective on life when she was only a child.

One of her uncles was wounded in a battle in Luxembourg and sent to a hospital in Texas. The visits to his bedside, seeing the numerous men wounded in the hospital, would have a lifelong impact on her, leading her to pursue a career in nursing.

Esquivel's uncle caught a fragment of shrapnel in his leg. He was awarded a Purple Heart and recently received additional military honors.

"I always feel a lot of respect for the military people when there's war, because I think it just stayed with me," she said. "I wanted to do something to participate and to help, so I went into nursing. After I saw my uncle, who spent a lot of time in hospital, that's what got me interested in the nursing field."

As a young child, Esquivel says she understood the importance of a good education. After her mother died and her father moved away to work, she was raised by her grandparents in Lockhart, Texas, about 25 miles southeast of Austin.

"My grandfather used to say if you're going to get anywhere, you need to go to school and you need to get your education," Esquivel said. "I know it was hard, a lot of people did finally continue, but some of their parents just didn't have the necessary things to get them to school, and a lot of the time they had to go to work. They had to quit school to go to work."

Although many at the time were unable to continue their education because of financial problems, Esquivel attended school while her family lived off the food they were able to purchase with food-ration stamps. Her family learned to adapt to the changes the war brought, she said.

Esquivel's education proved to be helpful, as she met new people and began learning English and could act as a translator for her grandparents.

"My grandparents only spoke Spanish, but when I was maybe six, seven, an African American family lived next door to us and that's how I started picking up some English," Esquivel said. "When you went to school, you were not allowed to speak Spanish. What I learned from my neighbors helped in a year or two."

The Esquivel family regularly listened to the radio to obtain news about the war overseas. Often, the broadcast was in English, and Esquivel translated the war news for her grandparents.

She says she felt sorry for her grandmother, who saw three of her four sons drafted during World War II. Her grandmother lived in constant fear of receiving bad news from the frontlines.

The draft impacted nearly every family with a son in her community, Esquivel says. Like her family, she remembers that some families had more than one member taken into the military.

During the war, Esquivel says she and other Mexican Americans experienced segregation in public places, such as school and even in movie theaters. But the war helped make her feel she was on equal footing with her white neighbors, she said.

"At the time [segregation] didn't bother me," she said. "I felt like that's the way it was supposed to be. But then I started seeing that maybe we can go [where only whites were allowed]. I came to Austin -- that's when I saw that everything here was not [segregated]. Here in Austin, you could do things -- it felt good."

Esquivel says the war brought about positive changes for Latinos.

"I did notice that when the soldiers came back from World War II, there was a lot of education in the families -- like they were inspired while they were in the military when they came back," she said. "They talked about their GI Bills, and they were all into education and into a better living environment."

After moving to Austin, Esquivel completed high school and took care of children for a local family while still helping her grandparents. Later, she took courses at Austin Community College, aspiring to be a social worker.

On March 29, 1952, Esquivel married Harry Esquivel; the couple had five children: Debbie, Edward, Jeanette, Tamara and Patricia. Despite enjoying the challenge college provided, Esquivel says she had to stop taking classes because of her family commitments.

"[School was] just a lot of studying and a lot of hard work and writing papers," she said. "But I enjoy that and I like that. I like to sit in class."

With the knowledge she gained from her courses, Esquivel worked hard and graduated from Brackenridge Hospital School of Vocational Nursing in 1955 and became a licensed vocational nurse.

In March of 1986, the nursing department honored Esquivel as the Best of Brackenridge. She demonstrated useful bedside-nursing skills for new nurses and was recognized for exemplary care of her patients.

She advises today's generation to set goals and educate themselves, so they can do whatever they love doing.

"Go to school and just work hard at that, then I feel that you can be anybody you can be," she said. "If you have an education, people will respect you -- that has a lot to do with it. Go to school as much as you can and educate yourself."

Looking back on the years, Esquivel said, "I think I have met all my goals that I had in life, like my education and nursing."

Mrs. Esquivel was interviewed in Austin, Texas, on November 16, 2002, by Laura Herrera.