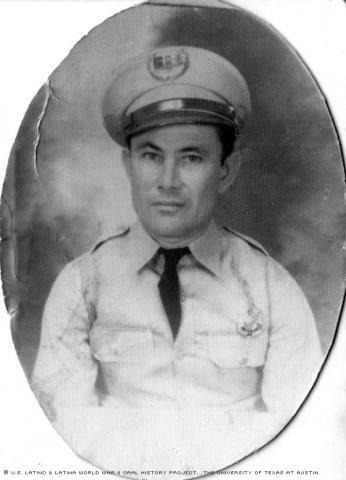 The only time Gonzalo Villanueva has been away for any extended period from his neighborhood in Arecibo, Puerto, Rico, was during World War II, when he served in North Africa, France, Italy and Germany. He even jokes he’ll live in his hometown until he goes to the grave.

Before going off to war, he went to school in his neighborhood, Dominguito, until the seventh grade. He couldn’t get into the eighth grade because of his father’s politics.

“They told me they could not admit me because I was not one of them,” he recalled. “They asked me my father’s affiliation and I told them that he was [during that time] Unionist. At schools in Esperanza and the Pajuil barrio, they told me no.”

His three sisters didn’t have problems getting an education, Villanueva says. One of them even got to the eighth grade, he recalls, an unusually high educational level for women at that time, as girls usually only attended school through the third grade.

Villanueva says his own political affiliation is with the PPD (Partido Popular Democrático), “and there I will be until God decides what to do with me.”

This devoted and unconditional affiliation is a sign of what in Puerto Rico is known as “Muñocismo,” a loyalty to the populist doctrines of Luis Muñoz Marín, the first Puerto Rican governor elected by popular vote, from 1948 to 1962.

Villanueva worked harvesting sugar cane until he enlisted in 1943.

“There was nothing else, and I did everything: I weeded, cut, worked the soil and I loaded the trucks,” Villanueva recalled.

His parents worked as farmers at a sugar cane farm, whose product they took to Los Caños Central, which, he said, “bought the cane and then they sent a check of what was left from the purchase of the soil and [payments] of the wages.”

The family life of Villanueva was similar to novels from the early 1920s. His mother and sisters dedicated themselves to housework and he and his father worked in the fields. Meat was scarce, and some common plates were codfish soup, yucca and sweet potatoes. For Christmas, it was common to eat roasted pig and drink sugar cane run.

Villanueva was 20 when he enlisted in the Army. He went to Fort Buchanan in San Juan, where he says he spent three days taking tests before getting admitted. According to the Army’s website, “During World War II, Fort Buchanan housed a depot supplying the Army Antilles Department. It also processed local troops through its replacement center.”

Villanueva spent his last two recruiting days at Camp Tortuguero in Puerto Rico. At the end of 1943, the military sent him to Panama, where he was assigned to the 296th Infantry Regiment of the Puerto Rican National Guard. He recalls hassles between Puerto Rican soldiers and the chain of command.

“Whoever got in a fight, they would only give them bread and water for some days, until they calmed down,” he said.

Despite the tension, Villanueva remembers having a pleasant and respectful relationship with the officers. He says he loved the Army, which, among other things, improved his family’s financial situation. He received bonuses of $27 a month, and his mother received an additional $27.

Villanueva was next sent for two weeks of training to the States, where he was assigned to Company C of the 2nd Battalion, 65th Infantry Regiment. He was then sent to North Africa, where he continued his training. There, he suffered typhus fever and was sent to Italy for an operation. Upon his return to Africa, he was assigned to the Canon Company, with whom he trained for the Continental Invasion.

After six months in North Africa, Villanueva was sent to France, where the regiment was divided and his company was sent to the Alps between France and Italy. Recalling the physical effects of duty, he said that one time he spent “90 days up there without taking my shoes off. When we were coming down ... I was coming out of the building but I fell down.”

His friends had to help him up; then cut off his shoes, as his feet were severely swollen. The constant exposure to moisture had given him “trench foot,” a disease that affects the skin, muscles and eventually the nerves of the feet. His fellow soldiers cured him with cold water and lotion, he says.

According to his military records, Villanueva was in the European Theater from October of 1944 to October of 1945; first in the Alps and then in Mannheim, Germany. He didn’t recall having any enemy confrontations. In fact, he says he walked freely around the city, and even met some civilians and attended mass.

He also saw some camps where German soldiers were detained. But what most remains in his mind are the nine pieces of clothing he had to wear because he was unaccustomed to the cold weather.

Villanueva says he was very happy when he found out from officers about the war’s end. After 25 months of service, the military discharged him on Nov. 24, 1945, with a final rank of Private First Class. He says his entire regiment came back, and that he earned several medals, including the Purple Heart, a World War II Victory Medal, three Overseas Service Bars and the European African Middle Eastern Theater Service Medal with three Bronze Stars.

“I remember when I arrived in San Juan. When I put a foot on my land, the first thing I did was to kiss it,” Villanueva said. “From there, we were taken to the train stations, where we took a train to Arecibo at 3 in the afternoon.”

Puerto Rico was still the same when he returned, says Villanueva, who apparently didn’t waste any time getting back into the local dating scene. After two months of courting, he married Josefina González Guzmán on August 31, 1946.

He was unemployed at first.

“We received $60 every month until I was finished with that,” he said.

Villanueva then took advantage of the GI Bill to study from eighth grade up to the fourth year of superior school, Puerto Rico’s equivalent to high school. While he was studying, the Korean conflict began, but he says he didn’t want to return to active duty.

“Many went again and many didn’t come back,” he said.

Once he finished his studies, Villanueva started working as a penal guard at the state prison in Río Piedras, Puerto Rico. He did this for 12 years, but says he decided to quit after suffering two accidents: a fall on some stairs and a gunshot wound when a fellow guard accidentally shot him in the left leg. He then switched to a job at the Nutritional Assistance Program’s office.

Villanueva says he dedicates his life to his wife, God, his children – Gonzalo Villanueva, Jr., Luz I. Villanueva and José L. Villanueva – and nephew, Gilbert S. González, who he and Josefina raised.

Mr. Villanueva was interviewed on March 28, 2003, at the Veterans Service Center in Arecibo, Puerto Rico, by Doralís Perez Soto.