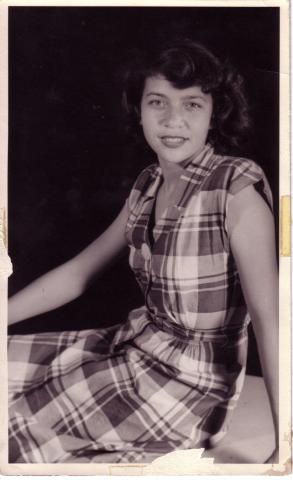 Gloria Flores Moraga defied many social norms in her lifetime: She moved out on her own while single, attended college when most women were expected to stay home and even worked as a disc jockey at the first all-Spanish radio station in Phoenix, Arizona.

A "Depression baby," Moraga was born Dec. 5, 1930, in Phoenix, Ariz., only 14 months after the stock market crash of 1929. Her father, Manuel Flores, baled hay for 25 cents a day to support his wife, Anita Daniel Flores, and their new daughter.

"My mother had a brother ... that would steal milk off the porches for me during the Depression because they couldn't afford to buy milk for me," said Moraga, recalling her parents' stories about their struggles.

Moraga would be the oldest child of eight, and the only girl until her sister, Anita, was born in 1944.

During her childhood, Moraga says her parents moved often between Arizona and California.

"At that time, I remember the grammar schools being much better [in Arizona] than in California," Moraga said. "And I had a terrible time, because we'd just be starting something in California, like fractions, and then I'd come [to Arizona] and they'd already finished them."

Her family finally decided to stay in Arizona after the attack on Pearl Harbor in December of 1941.

"There were rumors that the Japanese had gotten through the security in Santa Monica, and that was the only time my mother wanted to come to Arizona," Moraga said.

During World War II, her father worked in construction and used this knowledge to build their home in Mesa, Ariz. Moraga recalls Manuel dug a cellar for the house, which was an unusual feature for a home in Arizona. Her father did it in order to have dirt to make the adobe bricks.

"Mom used to can a lot, she would buy fruit and things very cheap, and it paid to can, especially during the war," she said. "All of that went into the cellar."

Moraga also recalls the rationing that took place on the home front.

"We couldn't get sugar, we couldn't get candy bars, gum, because all those things went to the servicemen," Moraga said. "We used to collect aluminum ... old tires, rubber, things like that. You used to get stamps for food and for gasoline, you got so many per month."

Moraga remembers writing letters and sending cookies to the servicemen.

"The mail you'd get from them, I remember very distinctly, was crossed off, torn off," she said, censored by the government in order to protect the troops.

She still has the pictures the servicemen sent to her.

Because she was the oldest, and because her mother was often sick, Moraga says she later came to understand that Anita suffered from hypochondria; Moraga was often pulled out of school to care for her brothers and sisters.

"I was like a second mother," she said. "And you know, I think the mentality was at that time, if you were a woman, you didn't have to go to school, you didn't need an education because you were going to get married and have kids."

Of her four years at Mesa High School, Moraga estimates she only attended for a total of two and a half years.

"But I did like high school, I was very active," she said, noting that her many activities included choir, drill team and the Girls Athletic Association. "I used to be so active in everything, and at times, I was the only Latina, the only Mexican in these things."

Moraga also recalls the de facto and de jure segregation that occurred in her community. She remembers visiting a theater and, because she had a fair complexion, an usher leading her away from the section designated for "the Mexicans and the Indians."

She also recalls her mother had to go to court to prove her younger children could speak English in order to attend an elementary school close to their home; otherwise, they’d be sent to a segregated school on the outskirts of town.

Upset with the treatment of Mexican Americans, Moraga’s parents moved the family to Tempe, Ariz., during Moraga's senior year of high school. She chose not to attend school in Tempe, but it wasn't the end of her education. She attended Lamson Business College in Phoenix for one year, and then worked as a sales clerk in a dress shop.

In 1948, she met her future husband, Pete Moraga, at a church picnic, but it was a date to the movies that led to an opportunity to work in radio.

Pete was interviewing for a job with KIFN and took her along.

"Pete said, 'Before we go to the movies, I have to go see this guy,'" Moraga recalled.

While there, she says KIFN Program Director Joe Alvarado mentioned he was also looking for a Spanish-speaking "attractive gal who can work as a music librarian, be a receptionist, be a jack-of-all-trades."

"And Pete said, 'How 'bout Gloria?'" Moraga recalled. "So we were both hired that night."

Moraga worked for KIFN, the first all-Spanish radio station in Arizona, even hosting her own half-hour show, "La Linda Mujer Mexicana," which aired Monday through Friday.

"I was very willing to do it," Moraga said. "I used to get a lot of fan mail and many requests. ... People were always surprised that I was so young, but they were very loyal, and they wanted to meet you because you're a celebrity."

She only worked at the station for one year before she had to move with her parents to California. Then, at the age of 21, she moved out on her own.

She recalls her father wouldn’t set foot into her house.

"He wouldn't talk to me," she said. "When it came time for us to get married, I had to move back into the house, otherwise, my dad wouldn't take me to the church."

Her romance with Pete would continue on and off for six years before they finally married in California on June 12, 1954.

Life with her husband would lead her back to Phoenix, but not for long. Soon, Pete was applying for a job with Voice of America. He went to Washington, D.C., all expenses paid, for an interview, and got a job working for the Latin American division of the government radio program. This led the Moragas to D.C., Mexico City and Lima, Peru. In 1969 the couple moved back to Los Angeles, where Pete worked first for KNX Newsradio and later as news director for KMEX-TV.

"It's been a very, very exciting life. I don't think I would change anything, except the death of our daughter," said Moraga, referring to their youngest daughter, Catherine, who died of systemic lupus in 1980.

At the age of 41, with five children, Moraga finished something she started as a teenager, earning her high school diploma from Mesa High School in 1972. She then attended Santa Monica College and received her associate's degree in theatre arts in 1976 at age 45.

Pete retired in 1992 and the couple moved back to Arizona. They now have 13 grandchildren and 3 great-grandchildren.

Moraga says she values education and family, but most of all, pride in oneself.

"There's nothing wrong with being ethnic -- you're so fortunate to have two types of lives, two languages, two upbringings in essence," Moraga said. "I think the main thing is to have a lot of pride in yourself, have a lot of self-esteem and not let anyone put you down, because you are not less than anyone else."

Mrs. Moraga was interviewed in Phoenix, Arizona, on January 4, 2003, by Violeta Dominguez.