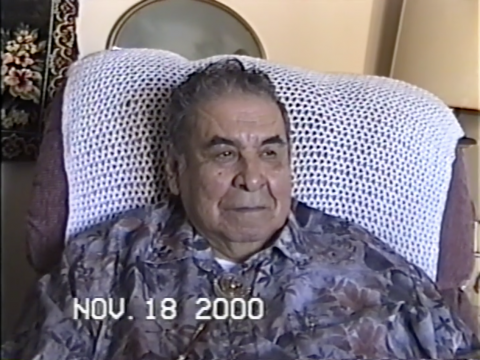 Growing up in the North Island neighborhood of San Diego, Ca., before World War II, Gilbert Castorena had a childhood filled with good memories of his family, friends and school days.

Those relaxing days changed in 1940 when Castorena signed up for the U.S. Navy. He was shipped out to fight, mostly in the Pacific Theatre, during World War II.

Like the other three children in the household, Castorena was placed in a primarily Anglo, English-speaking elementary school while his father, Gilbert Castorena Sr., worked as a carpenter and his mother, Maria (Murillo), stayed at home.

The Castorena family spoke Spanish at home. Young Gilbert was forced to rise to the challenge of learning English quickly in order to do well in school.

The transition into San Diego High School was smooth. He found there were a greater portion of Latinos there.

Castorena's high school years were filled with school functions and extra-curricular activities. As senior year arrived, he was called in for a final interview with his principal and encountered what he remembers as his first encounter with discrimination.

The comments from his principal didn't stop him. After graduation, he immediately went down to the Navy recruiting office with some friends.

After passing a qualifying test, Castorena was accepted as a hospital corpsman and was sent to a naval training station in San Diego where he treated wounded patients for over a year.

In 1940, he was sent to Iceland, a sailor assigned to the U.S. Marines. The objective in Iceland was to contain the Germans, who were pushing to occupy Norway, as a way to control the North Atlantic.

On Dec. 7, 1941 the Japanese military attacked Pearl Harbor, and Castorena, in Iceland, knew that the United States would soon become part of the war.

"The Germans had sunk one of our mail ships," he said, referring to the mid-October 1941 torpedo attack on the U.S. Destroyer Kearny, in which 11 men were killed. Later, the S.S. Reuben James was sunk; over 100 men died.

"It was mainly training exercises. They gave us schooling in jungle warfare because we knew we were going to be fighting the Japanese. They taught us how to fight through vegetation with machetes," he said. "Earlier in Iceland they had showed us how to shoot 45s. And I told them we were non-combatants. They told us they were going to teach us anyway.

"We were grateful later," Castorena said.

From New Zealand, Castorena received orders to report to Guadalcanal, a small island in the Solomon Islands that had been occupied by the Japanese in 1942. The U.S. troops were sent there to attack the Japanese troops and occupy the island.

Castorena's duties in Guadalcanal included routinely applying first aid to wounded soldiers and to try and prevent malaria that was being widely spread through mosquitoes. The soldiers were instructed to take atrabine tablets and wear protective clothing.

Castorena was part of the International Red Cross team that had been established by the Geneva Convention in 1919. The Convention was an international collaboration that tried to protect wounded soldiers and develop humanitarian laws.

The Red Cross symbol was modeled after the Swiss national flag in honor of the Swiss originator of the Red Cross, Henry Dunant, whose many efforts to lend aid to wounded soldiers eventually led, in 1863, to the creation of the International Red Cross and the Red Crescent Movement in Geneva, Switzerland. The work would entail giving non-partisan aid to the sick and wounded in war. The red cross was worn on the armbands of Red Cross members, was respected by most of the countries that had participated in the Geneva Convention in 1864.

Castorena and his fellow troops were regularly strapped for food as a result of the Japanese occupation of the seas, which prevented supplies from reaching camp. The troops were also under constant attack of Japanese snipers. Even though he was supposed to render medical aid, on occasion he also became involved in combat situations. At one point, he came upon an armed Japanese soldier hiding in a foxhole. Castorena shot in self-defense.

This wasn't Castorena's only contact with combat. In one of the first skirmishes Castorena and the rest of C Company First Battalion encountered, they attacked and killed 167 enemy soldiers.

The reality of the war had sunk in, but it did not destroy Castorena's spirit. Following the advice of his mother, to whom he wrote regularly, he prayed every night. He never doubted that he would return home.

Thoughts of home never left Castorena's mind as he remembered a good home-cooked meal, hamburgers, and an ice-cold Coke.

Castorena's duties came to an end in 1943 when he contracted malaria and was sent to recuperate at Fort Worth Medical Center in Texas. From there he returned home to his family in San Diego.

Life after the war was different for Castorena, although he found plenty to keep him busy. He worked for a little while with the San Diego Post Office and then took a job at the North Island Air Station where his father had previously worked. He worked as a metalsmith, preparing helicopters and airplanes for the war.

Outside of work, Castorena dedicated his life to service. He was President of the Balboa Optimist Club of San Diego and twice chairman of the American GI Forum that helps fight discrimination in the work place and helps find opportunities for children.

Two other important societies that Castorena participates in are the American Legion and the Veterans of Foreign Wars Association. Both of these organizations provide aid for veterans and their families, as well as try to encourage the education of children.

Education is something that Castorena has always valued. Much of his work has been to provide scholarships to college students. He feels that his experience in the war provided him with a greater education than he could have received in any San Diego classroom.

"It helped me get an education and to integrate and get to know people and to understand people. It also helped me learn how to help people when I could," he said.

The integration of Mexican Americans with other ethnic groups is something Castorena also feels has increased after the Civil Rights Movement of the 1960s.

"One good thing, like the service, is that it got people to blend together and get to know each other better. Mexican Americans are clannish and it helped people integrate," he said.