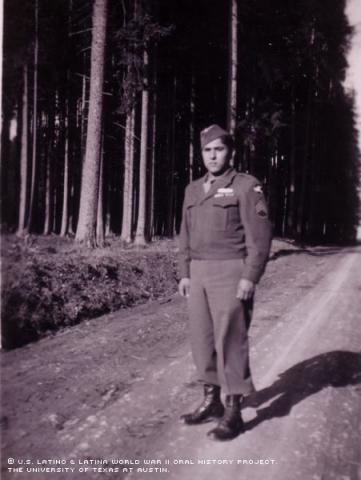 When George S. Vasquez was separated from his unit during the Battle of the Bulge in Germany, he lived by his wits behind enemy lines for a month

“The whole company had just vanished in the dark,” Vasquez said.

Company K of the 424th Infantry Regiment, 106th Army Infantry Division, had been defending its positions, trying to keep the Germans from marching on to Belgium, when its members were surrounded.

“One night the company commander says we couldn’t hold anymore ... so we infiltrated out,” he said.

Vasquez and five other soldiers were extremely exhausted and dehydrated from the forced march and, after stopping briefly, became separated from the main regiment. He recalls how a fellow infantryman woke him, saying, “Everybody’s gone, George. What are we going to do?”

Vasquez and the five others were on their own, with the German army not far behind them; they were lost with no food, maps or compasses. Fighting the German winter was a battle in itself. They couldn’t keep water in their canteens – it would freeze. So they drank from streams when they could and sneaked into villages for bread or raw potatoes.

“We didn’t trust the people at all,” he said. “They would turn you in.”

The hardships they endured were too much for one of the six abandoned soldiers, who got tired of running.

“He just sat in the middle of the road and said he was going to wait for them,” Vasquez said. “To this day, I don’t know what happened to him.”

Eventually, Vasquez and the remaining soldiers caught sight of a tank battalion charging down a hill. He saw white stars painted on the tanks, signifying the U.S., and ran toward them, waving his arms. He was finally rescued, but was suffering from malnutrition, frostbite, trench foot (an infection of the toes) and weighed 129 pounds – 41 pounds fewer than he weighted upon entering the war.

Vasquez credits his ability to live on the run for so long to his age; he was only 19 years old. He says he was fleeing for his life, as he’d heard rumors the German army wasn’t taking prisoners.

“I was young. I could run forever,” he said.

He and his five younger siblings – Mary, Matilda, Carmen, Mike and Frank – moved when his father left a job at a San Antonio hotel to work the sugar beet fields up North, in search of higher wages, Vasquez says. His father, George Vasquez, was a laborer at a meat-packing plant called Cudahey; his mother, Matilda Maria Soto, a homemaker.

His parents were disillusioned when they arrived in Minnesota.

“No job or nothing up here,” said Vasquez, also noting the family endured financial and social hardships as Mexicans there. “We were the only Mexican family in St. Paul Park … There was a lot of resentment among the kids [at school]. We were different than them.”

Vasquez quit school at age 16 and went to work for the Civil Service in Ogden, Utah, as an aircraft prop mechanic. He was drafted in December of 1943 at the age of 18. His mother was upset when she learned her first-born had been drafted, but his father was more pragmatic.

Shortly after the Battle of the Bulge, Vasquez’s squad rescued a group of POWs, one of whom Vasquez knew and had never gotten along with.

“He was just one of those arrogant Texans,” he said of the soldier, who’d tease him by calling him “Fats,” a reference to Vasquez’s hefty 5-foot-4-inch, 170-pound frame when he entered the service. The Germans were keeping the POWs in a house that Vasquez’s squad was about to destroy.

“I was just ready to throw the grenade in there when I heard someone say, ‘Fats! That looks like Fats!’” Vasquez recalled.

He says his squad had to shoot two German guards to save the American captives, and that many of the approximately one dozen POWs were wounded.

Vasquez’s unit was performing occupational and military government duties in Ingleheim, Germany, when the war ended. At that time, he was in a hospital in Wiesbaden, having fractured his leg while horsing around with one of the members of his unit.

“That’s where the war ended for me,” Vasquez said. “I never went into combat again.”

He did return to the field, though, as a noncombat staff sergeant. He and other Army personnel served in “occupational positions,” conducting reconnaissance missions.

“We were kind of like on vacation,” said Vasquez, wistfully recalling his travels through the German countryside, driving ahead of tanks in “reconnaissance cars” from Frankfurt, Germany, to Salzburg, Austria, and then through Munich, Germany.

The Silver Star, earned when Vasquez destroyed an entire enemy machine gun position single-handedly, afforded him some protection: A commander took him out of combat one day in March of 1945, saying he didn’t want anything to happen to Vasquez because he was going to get the award. Vasquez and 20 other Americans were honored with a parade in Paris in April of 1945. A French general pinned his medals on his uniform and kissed his cheek. Vasquez was allowed about a week of vacation time in London and Paris for the ceremony.

He returned to his unit from France as squad leader, and was discharged in March of 1946 at the rank of Private First Class.

After the war, Vasquez returned to St. Paul, Minn., where he got his GED and started working for the Chicago, Burlington, and Quincy Railroad. Despite his combat experience, his incomplete education kept him from getting a well-paying job right out of the military. He started out emptying ashes from locomotives for disposal, and had to struggle to ascend to the position of fireman, whose job it was to ensure engines had enough fire to keep going.

“Get a good education,” he said. “I tell my kids that all the time.”

On Jan. 22, 1949, Vasquez married Esperanza Gonzalez, who he met at a birthday party. The couple has two sons, George and John, and one daughter, Christine. They also have six grandchildren.

Vasquez says he doesn’t share stories of his war experience with his children because of the casualties involved.

Still, he says the military experience was a good one overall, as he learned to both follow orders and give them.

“Before, I was kind of ‘I know everything,’’’ Vasquez said.

Mr. Vasquez was interviewed in Grove Heights, Minnesota, on November 8, 2002, by Angela Macias.