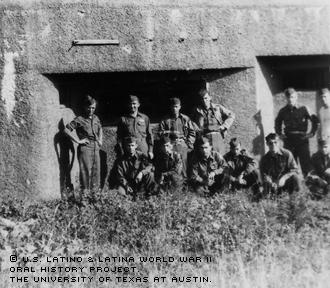 Dealing with the harsh realities of World War II was tempered by experiences that Fred Davalos encountered in his youth. He’s more at ease relating the difficulties of his childhood than his experiences during the war, when he lost an eye.

In one particular battle during the Rhineland Campaign, Davalos was struck by shrapnel from gunfire on Feb. 8, 1945. He says his eye was literally shot out; however, he marched on.

"I walked about a mile to Battalion Aid after getting shot in my eye," Davalos said. "I didn't want to take up any space, so I chose to walk. I could barely see anything, and it was two o' clock in the morning."

After being moved from hospital to hospital, Davalos finally had an eye operation in Paris. At that time, he says he thought he could still feel his eye, and had no idea he’d lost it.

With only one working eye at his disposal, military personnel insisted he could still remain in active military service.

"I was going to go back into combat," Davalos said. "They told me that since I still had one eye, I could do it."

After being cleared for combat duty, he was rerouted to Berlin, where he finished his tour of duty in 1946.

In retrospect, Davalos says he was prepared at an early age for the rigors of war. After being born into an impoverished Catholic family on Jan. 26, 1925, in Clovis, N.M., he experienced a childhood full of poverty and hardships.

His father, Santiago Davalos, worked several jobs to make ends meet and his mother, Pablita Gonzales Davalos, was a housewife who tended to her five children.

After attending the ninth grade, young Davalos dropped out to help the family make more money.

"We were poor," he said. "I got tired of wearing the same clothes every day. I came from a large family, and feeding us was hard for our parents."

The family was so poor, Fred and his brothers helped their father with many of the jobs he did.

"My father worked mostly at an ice plant, and we used to go to farms during cotton-picking season, and that interfered a lot with education," Davalos said. "We couldn't get to school until January, so we missed a lot of school. But we survived."

He notes, for instance, that Thomas got to the 12th grade, a rarity in those days for poor children whose families needed them to work to help support the family. But even though he had to forego an education to make money, Davalos says his parents still wanted him to be schooled and well-educated.

"My dad used to emphasize education," Davalos said. "But at that point in time, it was right after the Depression, and it was hard to survive from day to day."

Davalos was working as a bellman in 1943 when he was drafted into the Army; being in the military allowed him to leave the state for the first time. His tour of duty in the Armed Forces took him to Texas, Georgia, North Africa and Southern France. He fought in battles in Rome-Arno, Ardennes and Rhineland.

Davalos was decorated with a number of citations, including the Bronze Star Metal, one of the honors given in the military to soldiers who exhibit courage in the line of fire. He also was awarded the Parachutists Badge and a Purple Heart.

"I just fired and hoped I hit the right guy," said Davalos of his courageous efforts. "In situations like that, you never know if you're going to wake up. Just trying to sleep at night was tough."

After being discharged on Jan. 6, 1946, at the rank of Private First Class, Davalos went back to Clovis, where he met his future wife, Sophie Olona.

They married in 1951 and had five children: Ella, Fred Jr., David, Donald and Arthur.

"I met my wife at a party," Davalos said. "I had never met her before then."

All of the couple's children live in the United States, except Arthur, who died at the young age of 19 in 1978 because of heart failure.

With achievements and experiences most people can only dream of, Davalos summed up his thoughts on life in one simple sentence:

"It's amazing how things happen."