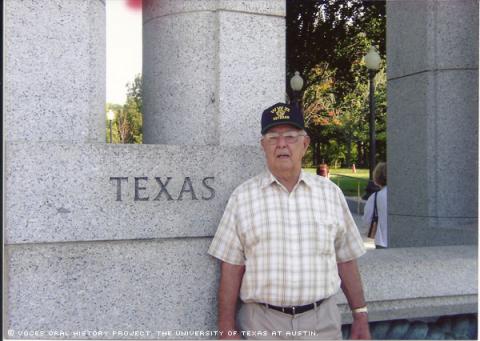 At least once in his life, Fidel Vasquez considered himself to be really lucky. His U.S. Army construction unit shipped out ahead of the supply ship carrying the equipment for him and his fellow soldiers. They made it, but the supply ship was sunk by the Japanese.

Vasquez's hometown was Marfa, Texas, where he attended segregated schools with his four brothers and four sisters. Learning to get along in school and working as a farmhand contributed to his war experience.

Vasquez was drafted Jan. 1, 1943, when he was 19 years old. His brothers were also drafted into the military about the same time as he was. Two served in the Army Air Forces, and another served in the Marines.

His mother was worried for her sons. His father, Natividad, told him, "Anything can happen, and it can happen to you - but I hope not."

The elder Vasquez had served in World War I in the Army's 90th Infantry Division. Ten days before World War I ended, Natividad was wounded in the hip. He later received the Purple Heart.

After the younger Vasquez was sworn into the Army, he was sent to basic training at Camp Livingston, La. Basic training was a hard time for him, but he got through it. He didn't want his mother to worry, so he wrote a letter once a week just so she would know that her eldest son was still alive and well.

There were 60 Latinos in his company of 200 soldiers, and they stuck together and formed a big family. That was "how it's supposed to be," Vasquez said.

After he finished basic training, he transferred to Oakland, Calif., to prepare to go overseas. It was just 14 days into that journey to Australia that the Japanese sank the supply ship.

Vasquez and his company had to stay back and wait for another supply ship to come before they headed to an airbase in New Guinea. During the 16 months that he was stationed there, he worked as a crane operator, unloading heavy equipment from the docks and loading it onto trucks.

Later, he was sent to Manila, Philippines, and worked with heavy equipment and crane operating there for seven months. He was still there when the war ended. He returned to Marfa on Jan. 7, 1946. Vasquez said it felt nice to be back. His family was happy to see him.

Vasquez was born on Oct. 31, 1923, in Casa Piedra, Texas. While at school in Marfa, he played baseball and softball with the other children. But Latino children in his town were placed in a separate school from the white children, so he didn't have any white friends when he was in school.

Because Vasquez was the second-oldest child and the firstborn son, he was responsible for helping his parents and taking care of his brothers and sisters. Vasquez's father worked on the Marfa Air Base nearby. His father didn't make much money, and his mother stayed at home to take care of the children.

Stepping up to the plate as the eldest son, Vasquez left the sixth grade and went to work on a ranch to help support his family. On the ranch, he took care of the windmill, and sometimes rode a horse and helped maintain the cattle. He didn't like the job much and didn't get paid well, but he knew he had to do it to support his family.

Life after the war was much better for Vasquez. He started to notice that people respected him more, and it felt nice. He was proud that he had served his country. He settled quickly and got used to being a civilian.

Vasquez went to work for the Texas Highway Department in maintenance construction. He worked in that field for 38 years and enjoyed it, especially because it paid more than working at the ranch.

He met his wife, Maria Dolores Gonzales Vasquez, nine years after the war ended. They met in the mountains while Vasquez was deer hunting. After a five-month courtship, they married on April 5, 1959. They had two children, Fidel G. Vasquez Jr. and Diana Valdes.

Vasquez said his children were able to get an education and lead a better life than he had.

Mr. Vasquez was interviewed by Liliana Rodriguez in Presidio, Texas, on Aug. 3, 2010.